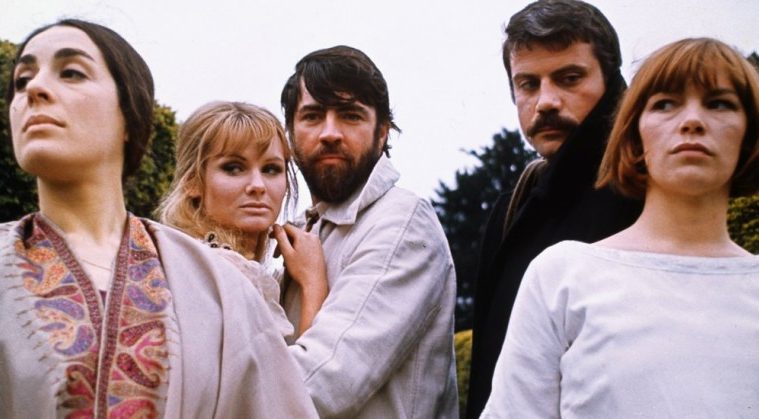 Ken Russell’s reputation as a stoker of controversy and flamboyant provocateur in extremis largely precedes his voluminous body of work. His best-known film, The Devils – condemned by the Catholic Church and edited significantly by the film’s producers before finally being released by Warner Bros. in 1971 – continues to uphold a sorcerer-like allure due, in part, to still-relative absence on home-video platforms and repertory circuits. It seems that, in some ways, Russell’s notoriety stems from how much censorship succeeded – an infamy bolstered by the continued inaccessibility of his most notorious efforts, even in the on-demand era, despite the loosening of moral standards since his films first passed through ratings boards. It’s hard to believe that, as far as content is concerned, a modern audience would still find his depictions of sexuality and religion so morally beyond the pale. But from a stylistic perspective, much of Russell’s formal eccentricities still feel abrasive to an extent that makes it hard to say whether his artistic sensibilities should to be considered legitimately progressive auteurism or nothing more than shock-and-awe kitsch.

It’s fitting, then, that Russell’s notoriety as an iconoclast began with his adaptation of Women in Love, the fifth novel by D.H. Lawrence, an artist whose life and career was marred by censorship and accusations of obscenity that created a public reputation closer to that of a pornographer, rather than a modernist artist par excellence, by the time of his death at age 44. Lawrence’s novel concerns a bourgeois set of young men and women in a small English coal-mining town exploring the limits of romantic and erotic love in a supremely British, high-art sort of way. Over the course of the 500-page novel, Lawrence writes rhapsodically about nature, death, and the bounds of romantic love through characters who often sound like little more than mouthpieces for the author’s socially conservative philosophy. The novel is filled with the sort of rigidly bourgeois, excessively stilted dialogue that would sound awkward, to say the least, if actually spoken in an earnest, irony-free fashion by real human beings. And when Russell’s film hit theaters in 1969, at the end of the same summer that witnessed Woodstock and the Stonewall Riots — the reverberations of a vocal counter-cultural movement determined to shatter barriers of tradition and societal standards felt throughout the world — Women in Love looked fated to be a period piece that would flounder in its blindness to contemporary historical circumstance.

Two mid-twenties sisters, Ursula and Gudrun Brangwen (Jennie Linden and Glenda Jackson), attend a wedding in their provincial coal-mining town and fall in love with two members of their bourgeois social set: Rupert Birkin (Alan Bates), an inspector at the grammar school where Ursula teaches, and Gerald Crich (Oliver Reed), the son of a coal-mining executive. Their courtships occur over densely intellectual conversations that serve as abridged versions of those found in the book, here given a much more airy, playful quality through a number of radiant performances — Glenda Jackson and Alan Bates’ in particular – set against gorgeous, mostly outdoor locations. A number of deaths background the romantic lovers’ spiritual quest, and the couples flee from imminent personal dissolution to a small Swiss village at the foot of the Matterhorn, where the drama of romantic love turns into a drama of spiritual dominance.

It’s not exactly the stuff of sex, drugs, and rock ‘n’ roll, but Russell’s relentlessly electrifying direction takes Women in Love pretty much as far away as possible from any dry and drab stigma one might associate with period pieces, and without defying the intended setting of its source text. Between the gorgeous naturalist cinematography and gymnast-like camera moves from cinematographer Billy Williams, the pastel brilliance of the costumes designed by Russell’s then-wife, Shirley Russell, and the simply balls-out sexual imagery, the stuffiness of the novel’s erotic and metaphysical yearnings receive an acid-wash treatment, rendering undercurrents of sexual liberation that are purposefully underplayed in Lawrence’s novel impossible to overlook.

By film’s end, when the romantic entanglements between Gudrun and Gerald really begin to unwind, it does feel as though a small piece of the puzzle went missing somewhere along the way. The disillusionment and scorn that transpires between them feels a bit sudden, and it is at the end – particularly in how the film denudes itself by nearly stating its aims directly to the audience in the final dialogue exchange – that the shortcomings of Russell’s ambition to adapt a 500-page, dialogue-driven romantic novel become most obvious. When operating at its highest register (granted, most of the film), it succeeds as a matter of style over substance. For all the words that Russell’s characters have to offer, his rapturous depictions of love as the ultimate experience are what elevates Women in Love to heights that feel distinctly cinematic in some unorthodox way. And it’s here, too, that all of Russell’s unorthodoxy as a provocateur par excellence feel most fully achieved.

A new restoration of Women in Love screens at Metrograph from December 1-7.