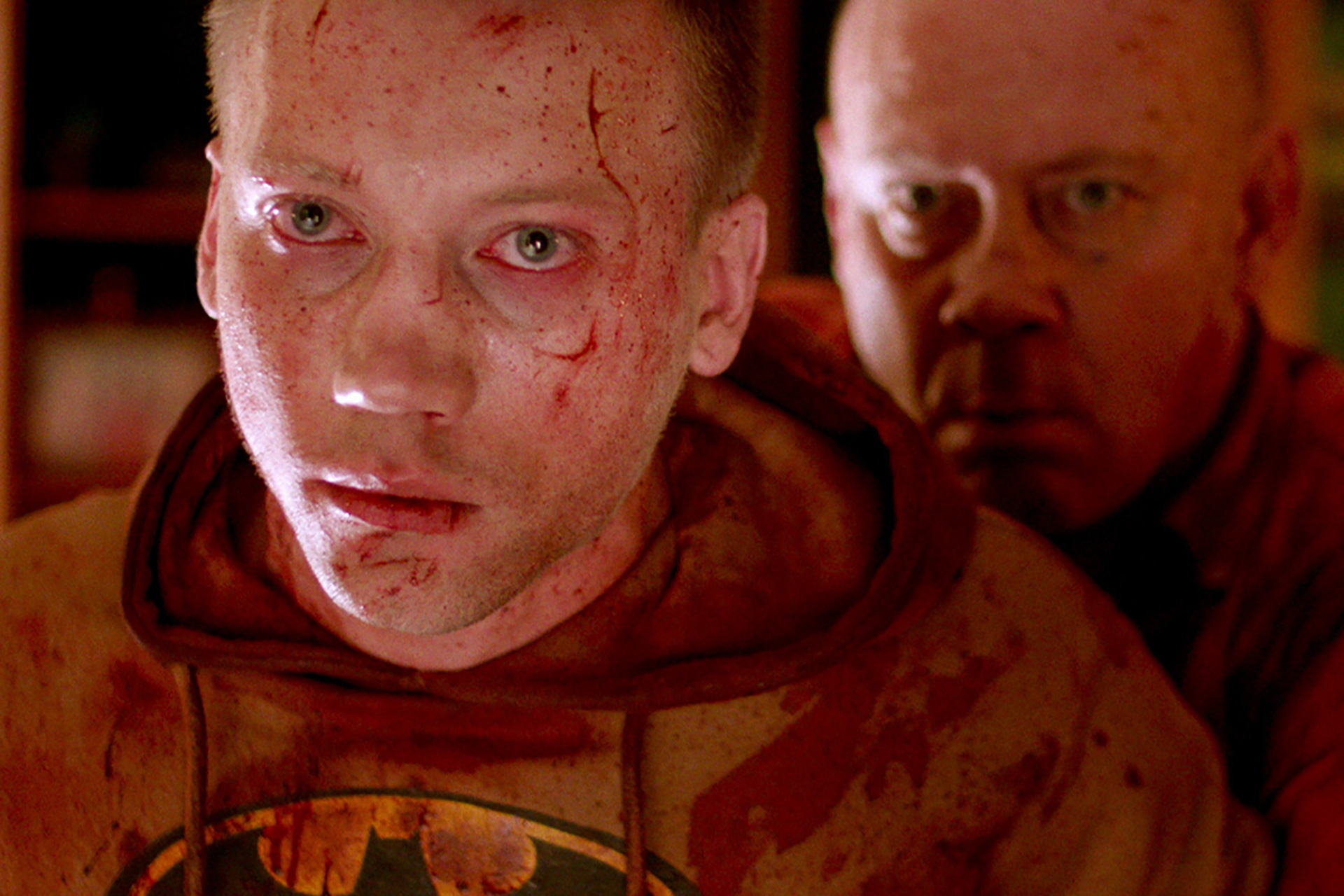 Matvey (Aleksandr Kuznetsov) just wants to take his girlfriend Olya (Evgeniya Kregzhde) on a date. At least that’s what he tells her father Andrey (Vitaliy Khaev) when he opens the door. We know it isn’t quite true, though, considering his pulse is racing and his grip on the hammer hidden behind his back is tightening. Because a neighbor is walking to her apartment across the hall to provide way too compelling a witness, he can’t just take a swing and leave. So Matvey enters upon invitation, locks the door behind him, and readies himself once more to do what he came to do … when Olya’s mother Tasha (Elena Shevchenko) appears to offer coffee and tea. What can he do now but sit and wait to hopefully leave?

While the awkward silence and surprised scoffs upon learning Matvey’s would-be victim is a police detective make for a humorously discomforting scenario, writer/director Kirill Sokolov isn’t interested in leaving Why Don’t You Just Die! a subdued affair. So he gets the ball rolling by ensuring this young houseguest’s hammer falls to the floor with an audible thud. Andrey isn’t stupid. He sees the tool and knows there’s no way it’s not being utilized as a weapon. He’s never heard Olya talk about a Matvey let alone a Matvey that was also her boyfriend and his job supplies ample potential for people wanting him dead. Why shouldn’t he assume this punk was one? Cue the shotgun blast commencing a raucous beat-down through walls, tables, and television screens.

The less you know about what comes next, the better your enjoyment should prove since the ride takes more than a few twists and turns thanks to everyone possessing secrets that make another’s blood boil. Despite being the one to spark this chain of events by ringing the Gennadievitchs’ doorbell, Matvey is more or less the only innocent party involved. He’s here on behalf of Olya. She has beef with her father. He’s been hiding something from his partner Yevgenich (Mikhail Gorevoy). And poor Tasha is caught in the middle about to have a nervous breakdown because she’s probably been a confidant to more than one of them as they screw each other over. Matvey has therefore entered the worst place at the worst time under his own volition.

Sokolov wants us to be in the dark because he knows his reveals will possess that much more entertainment value as a result. So we’re often made to watch a gruesomely violent scene leaving viscera in places no deep cleanse could ever erase before we fully comprehend how characters (and objects) got here. The opening scene is a perfect example because we have no idea who Matvey or Andrey is. All we know is that the former wants to kill the latter and the latter isn’t the type to simply let him do it. Only when an interstitial flashes Matvey’s name on-screen do we finally rewind to glean a few more details about him agreeing to murder. The same goes for Yevgenich and ultimately Olya upon their arrivals.

Who then is the person at the center? Andrey. Whether to be killed, propositioned, or assisted, everyone who stands on that doorstep has been summoned by the promise of his presence. No one should be shocked either once we see how brutish a man he is—someone who treats his wife like a subordinate, is only too eager to torture a stranger for information, and thinks he can talk those who he’s betrayed into believing his betrayal was for their benefit. He’s a user and abuser who knows exactly how to get everyone in line by force, fear, or manufactured charity. Everything he does is a product of selfish motivation and it doesn’t take long before we wished Matvey cracked his skull open frame number one.

The film progresses with a high-octane energy that keeps us on our toes as people are thrown around like ragdolls whenever passion gets the better of thought (one hundred percent of the time). Using flashbacks as a device works because it makes certain we’re not too bogged down by exposition we don’t yet need to enjoy the carnage. Sokolov tries to also inject a couple moments of artistic flair in the middle that revolve around handcuffs, but neither is quite as successful since their value solely lies in instant gratification rather than narrative progression. I wouldn’t have minded if he kept adding similarly comical vignettes throughout at random moments, but they prove distracting without that consistency. They also slow things down whereas the flashbacks conversely speed things up.

He doesn’t need them either when the dynamics between characters is more worthwhile anyway. Laughing at Matvey fantasizing about escape pales in comparison to the mix of comedy and horror born from Andrey inflicting more pain. It prolongs the inevitability that we crave. These people are so greedily narcissistic that the best fun lies in what they’re willing to do to each other and how they react upon realizing that truth. Love is ultimately their most vicious weapon because it allows them to put their guard down at the worst possible instances to subsequently relinquish whatever advantage they had. And as the title suggests, death provides the most opportunities for hubristic turnarounds due to it never sticking. There’s always one last breath to twist the knife.

Why Don’t You Just Die! is still planning to hit select theaters on April 10 before coming to VOD and Digital HD on April 20.