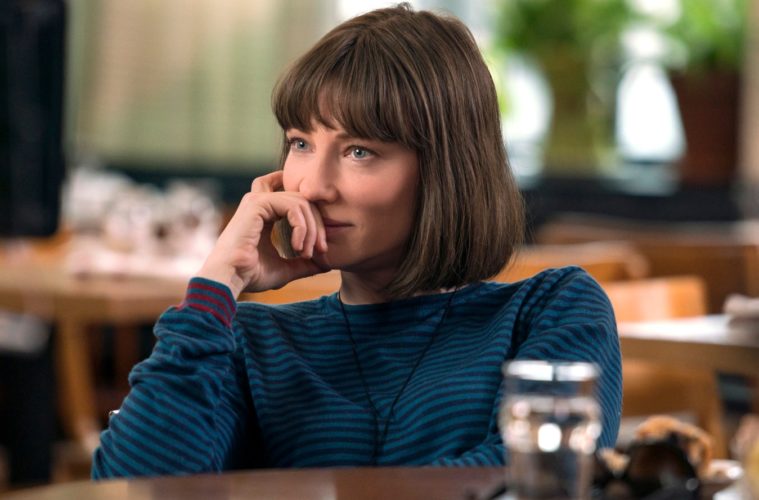 A witty portrait of a deferred career, marriage, motherhood, and a missing matriarch, Maria Semple’s hit novel Where’d You Go, Bernadette unfolded in epistolary fashion, making a unique challenge for Richard Linklater and co-writers Holly Gent and Vincent Palmo Jr. Finding an engaging tone between tightly-packed eccentricities and a more grounded portrait of mental illness is difficult, but his film’s rocky introduction eventually settles into an involving tale of self-discovery and how a woman’s dreams can be sidetracked without those closest to her realizing it. As if beholden to laying the narrative cards out on the table as quickly as possible, Linklater seemingly wants to throw as much as he can into the first act before cracking open our characters to see what makes them tick, leading to a more intimate, emotionally rewarding journey.

Bernadette Fox (Cate Blanchett) lives by the beat of her own out-of-tune drum. A once-heralded architect, for the last few decades she’s given up creative passions, living in a bubble that ignores the fellow parents (aka “gnats”) at her daughter’s school and relying on a panoply of prescriptions to get by. She’s also not interested in the social status that comes with the technology-obsessed industry of Seattle, where her husband, Elgin Branch (Billy Crudup), works for Microsoft and her neighbor, Audrey (an understated Kristen Wiig), is the definitive PTA mom. After her daughter, Bee Branch (Emma Nelson), desires to go on a family trip to Antarctica, a series of unfortunate, perhaps self-precipitated events result in Bernadette’s further ostracism from those closest to her.

In the novel, peculiar threads–from an overgrown blackberry patch creating utter chaos to an unexpected FBI investigation–are relayed through letters, e-mails, police reports, psychiatrists’ transcripts, emergency room bills, school reports, and even a TED Talk. Linklater chooses a more visually palatable structure while still leaving room for a few clunky, if earnestly sentimental visual ideas. There’s a Siri voice dictation that acts as a therapy session for Bernadette and a YouTube video essay (featuring brief appearances by Laurence Fishburne, Steve Zahn, and Megan Mullally, as well as some noticeable de-aging of Blanchett and Crudup) that lays out all the backstory one could want. These information dumps aren’t the film’s strong suit, but they do set the stage for what clearly attracted Linklater.

As we learn of Bernadette’s darker past and unfulfilled career goals–leading to extreme anxiety and isolation that now occupies her life–a genius bit of crosscutting is employed by Linklater’s long-time editor Sandra Adair. As Bernadette speaks to a former colleague (Fishburne), her husband sits down with a psychiatrist (Judy Greer) to discuss how their relationship has unintentionally drifted apart. As in Before Midnight, we see the emotional scars accumulate from years of benign neglect in addressing substantial issues in their marriage. Rather than being face-to-face, we seamlessly move back and forth from each conversation. It’s the first time in the film that we see through Bernadette’s outer shell of defiant independence and get a peek into Elgin’s frustration from both his own noncommittal detachment in the relationship and his other struggles with his wife. Crudup, who recently impressed in 20th Century Women, once again nearly steals the show here, with a palpable level of grounded emotion fighting its way to the surface through his weathered psyche.

The similarities to Blanchett’s Blue Jasmine character won’t go unnoticed–both, to borrow from Almodóvar, are women on the verge of a nervous breakdown–but Linklater’s more skilled than Woody Allen at unmasking a certain vulnerability amidst the neurosis. There’s an underlying warmth to this portrait of a family gone awry that he desires to leave uncluttered. The novel’s pregnancy subplot has been discarded and there’s no true mystery in the detective story of tracking down Bernadette. He instead leaves room to explore a woman’s struggles in balancing career and motherhood–specifically how the sacrifices necessary to find happiness often go unheralded or, at their worst, ignored by both her family and society at large.

One imagines how over-the-top zany this could have been made, had the adaptation been overtly faithful, yet Linklater is able to extract the heart of the story while injecting some of his own characteristic themes. A poignant look at the commitment required for a relationship to work and the damage enacted when creativity is stifled, there’s even room for the most earnest admiration of the craft of architecture since Columbus. It takes an entire act to begin to hit home, and Bernadette’s melding of a self-discovery and missing-person story offers no genuine suspense in how the finale will play out, but by wearing his heart on his sleeve, Linklater’s comforting approach is more than enough. When Elgin realizes too little too late that Bernadette’s “an artist who stopped creating” and it might be his fault, it’s as much as a confession for the character as it feels like a self-declaration for a prolific director always searching for stories he can tell with his own personal, passionate approach.