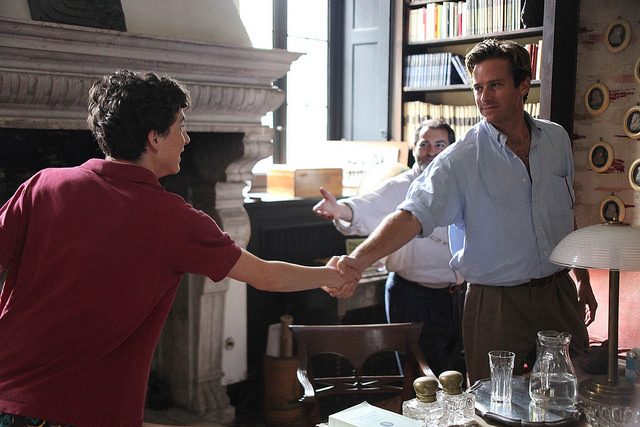 Watch: Timothée Chalamet Meets Armie Hammer in New Clip from ‘Call Me By Your Name’

Now aiming for a fall release, there’s still a long wait until audiences will be able to see Luca Guadagnino‘s follow-up to A Bigger Splash, Call Me By Your Name, but for those that want a preview, a new clip has arrived today. An adaptation of André Aciman‘s novel, scripted by James Ivory and the director, it follows a 17-year-old boy (Timothée Chalamet) who begins a romance with the house guest (Armie Hammer) of his professor father (Michael Stuhlbarg). This new clip features the first meeting between to the soon-to-be lovers.

“I knew that Sundance was a warm environment for this movie because when we showed I Am Love, I felt the Sundance audience was unbiased, uncynical and very open,” the director tells THR, answering the question as to why the film didn’t wait for Cannes. “We only submitted to Sundance and Berlin; I never thought of going beyond the winter festivals, and I’m glad they both picked the film.”

He also opened up about his upcoming Suspiria remake, saying, “Suspiria will show a completely different palette of tone, texture and emotional journey, compared to the other movies I’ve made. It goes deep into the human identity. In psychoanalytical terms, something that makes you scared also makes you feel pleasure. This contradiction is something that’s very interesting to me. I’m a very eclectic person and I enjoy multiple tastes; I’m like a bee who jumps from flower to flower. Before I die, I have to make a war movie, a Western and a movie like Mike Nichols, because I love him.”

As for Call Me By Your Name, said in my review, “A feat of accentuated sound design, as hands run down staircases and across bodies, and arresting cinematography, luxuriating in the beauty of Italy and those that occupy it, Call Me By Your Name has the effect of being transported to this specific time and place. It’s a film of overwhelming empathy and playfulness as loneliness turns into gratification and desires are slowly manifested into reality.”

Check out the clip below and see the first clip here.

Call Me By Your Name will next stop at Berlinale before a release this fall.