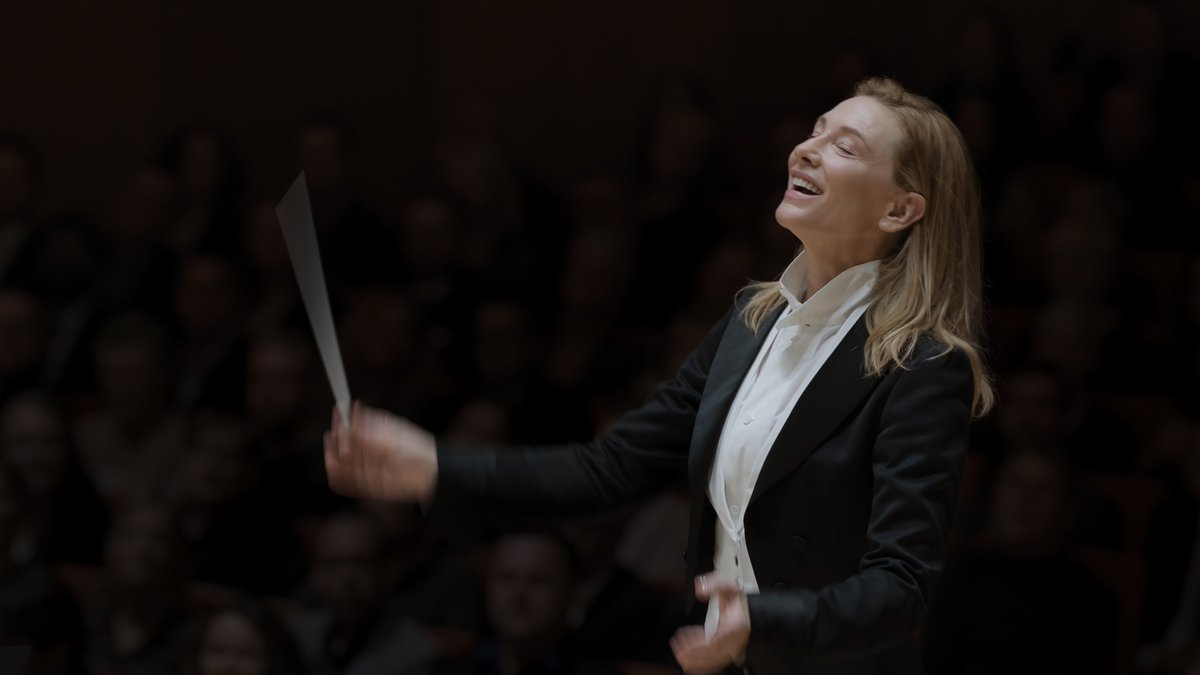 At the end of the 1970s, while working as a bat boy for the Portland Mavericks, Todd Field had a bright idea: why not make a stringy-shaped gum (call it Big League Chew) so that kids could mimic the tobacco chewing players on the plate? In 1980 he and his partner sold it to Wrigley’s. He was 16 years old.

Field knows a lot about ideas. He probably knows a phrase like “inside baseball,” too. You’ll find evidence of both in TÁR, his first film in 16 years. For much of its first hour Cate Blanchett (eating up scenery as the eponymous conductor of the Berlin Philharmonic) is made to deliver slightly unconvincing takes on the world of classical music. For the next two she is totally remarkable, stretching out those talents in a work that responds in turn. TÁR is an effort of tremendous skill and restraint, beginning with a confidence bordering on arrogance and building to a brilliant crescendo—only after that first act do the best things begin to surface, the compelling energy of ruthless ambition and the unmistakable, delicious hum of dread.

16 years is a long time in cinema; other ideas from Field, including a story about the soldier Bowe Bergdahl, adaptations of Cormac McCarthy and Jonathan Franzen, a film about the Mexican revolution, came and went. In a recent interview with the New York Times, Field suggested that he started to pitch projects he knew would never get made as a way to spend more time with his kids. So what happens when someone does say yes? You might end up with a film just like this: a nearly three-hour chamber piece with a funereally hushed mise-en-scène, full of stuffy conversations in cavernous rooms; a film about a problematic composer where almost no music is heard for the opening hour, where credits play in full at both the beginning and the end, and where the curtain raiser is a 15-minute (!) interview with the New Yorker‘s Adam Gopnik.

You also end up with the film Field probably wanted to make—one that asks a great deal but returns something richly satisfying. TÁR, for its faults, is mercilessly watchable, boasting quality in every position: there is Florian Hoffmeister’s exquisite cinematography and Hildur Guðnadóttir’s note-perfect score (the composer also gets name-dropped); the tasty casting with Nina Hoss’ sad eyes (and her side-eyes) and Mark Strong in a hairpiece; and, amongst other surrealist flourishes, a dream sequence reminiscent of Apichatpong Weerasethakul’s Blue. Best of all, Blanchett is present in almost every scene: going for runs in the Tiergarten’s soggy leaves, slurping noodles like Anthony Bourdain in Vietnam (the budget here is also notably present), or feverishly conducting in the genuine Berlin Philharmonie––a building so grand it once inspired a Wim Wenders documentary.

Blanchet plays Lydia Tár, an artist as famous for her combative personality as for her Mahler interpretations. The film’s brewing storm is an unfolding scandal: allegations of seduction and gaslighting from a former assistant; a pattern of behavior that Field accentuates by including a current victim, her assistant Francesca (Noémie Merlant, great as always), and a potential future one (played by the cellist Sophie Kauer). Lydia lives alone in a high-ceilinged Altbau out West while frequenting the starkly modernist apartment of her first chair violinist and long-term partner Sharon (Hoss), as well as their adopted daughter, Petra—the only being capable of disarming her. The film’s men are consigned to the margins. A loyal board member (a great little turn from veteran actor Julian Glover) and a New York funder (Strong) comprise about half of them.

The richness of this story is so hard to resist you begin forgetting that Field may not be the most appropriate person to do its telling; curiously, TÁR is his from an original screenplay. As portraits of monomaniacal, problematic artists go, however, it’s a doozy. TÁR is less a treatise on abuses of power than a character study. There isn’t a single mention of MeToo, and Field is too smart to really go into the weeds with cancel culture—though he flies close to the sun on more than one occasion. Its running time appears indulgent but the film more than earns this, and it grants Field the right amount of space to eke out his drama—the red flags take time to appear, then suddenly they’re everywhere. Similar to her conducting, Lydia’s relationship with the world is one of total control, sucking friends and lovers into her tyrannical orbit to the point that even the hum of a fridge or the slight rattle of her electric car’s A/C unit is enough to trigger. Field takes that precious, hard-won, festering silence and drives it headfirst into cacophony.

Writing for the Village Voice, the formidable Dennis Lim once called Field’s debut In the Bedroom “the long overdue coming of age of American independent film.” TÁR might not be fine art (many points for trying), but it is a great reminder of what grown-up, middlebrow filmmaking, given the right blend of confidence and nurturing, can do—a work that, unlike its protagonist, refuses to talk down to you.

TÁR premiered at the Venice Film Festival and opens on October 7.