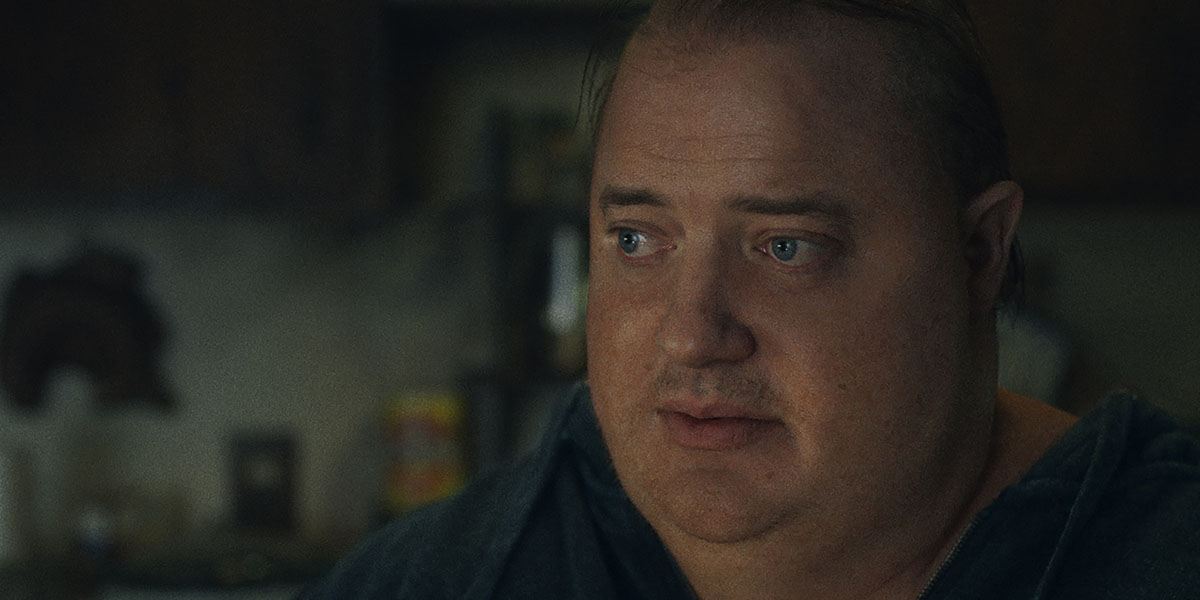 In the mid-1990s Darren Aronofsky wrote a list of ten movies he hoped to one day pursue. His first six, from Pi to Noah, all came from it. (No one seems to know if mother! did, though I wager its inclusion is likely.) It seems a stretch to think he had “adapt a play written in 2012” on there, but you never know. The Whale is very much a filmed play, and it makes no pretensions otherwise: the set is a Set, the acting is Acting, and monologues come quick and fast. It’s based on Samuel D. Hunter’s Obie-winning work of the same name and stars an exceptional, resurgent Brendan Fraser as a 600-pound man attempting to reconnect with his daughter. Suffice it to say this film would be quite small without him.

In theatre productions of Hunter’s text, Fraser’s character, Charlie, was often played by an actor in a fat suit—a choice that is becoming increasingly delicate, to say the least. In The Whale, Fraser’s generous figure is accentuated by the special effects department, leaving only his face and voice free from any sense of the uncanny. (The first image released earlier this summer was met with a flurry of think pieces; get ready for more.) Yet somehow, arising from the pixels, his performance is strangely beautiful, one of those rare roles that seems to draw on years, if not decades, of a performer’s personal misfortunes and harness them into something profound. In short: after a steep career drop-off from his peak years and a costly divorce (his reported yearly alimony payments were $900,000), Fraser hit a tragic low in 2018 in the aftermath of sexual-assault allegations he made against the then-HFPA president Philip Berk.

You can almost sense it all in Fraser’s voice—I expect some of his more fragile line readings will be drifting around my head for days. But what else of this film? The plot follow’s Hunter’s almost to the letter. Frasier’s Charlie is largely stuck to the couch, teaching writing in online lectures with his camera turned off. His closest friend and confidant is Liz (Hong Chau, delightful as ever), a nurse who calls around with food and medical equipment, and someone who isn’t afraid to shoot from the hip. Another character is a redundant door-to-door Bible man named Thomas (Ty Simpkins). In a typically shrewd piece of casting by Aronofsky, Charlie’s daughter is played by Stranger Things breakout Sadie Sink, who brings decent Zoomer energy in a boilerplate teenage role. Charlie’s trauma—the root of his food addiction, and his estrangement from Ellie—comes from losing his lover, a male student for whom he left Ellie’s mother.

It is nothing if not succint: events are explained with basic exposition (“Even if you weren’t fat you’d still be the piece of shit who left mom and me for your student” is roughly something Ellie says); actions draw the expected reactions; there is the occasional twist or turn. It’s all rather straightforward. Since drawing an Oscar-nominated performance out of Mickey Rourke (a clear precursor to Fraser’s casting here), Aronofsky has been one of those “actor’s director” types, though perhaps never before to this extent—aside from the extensive CG used for Fraser’s body (and typically astute work from Clint Mansell’s string section and Matthew Libatique’s camera department, two Aronofsky regulars) cinematic flourishes are in short supply. Long gone are the days of fast cuts and diluted pupils (we can perhaps be thankful for that), as are the excesses of Noah and mother! (That said, the man who once called the close-up the best invention of the 20th century does stick to his guns on that one.) Somewhat contrarily, The Whale is Aronofsky at his most trimmed down.

But this director has always enjoyed a change of tune. While there have been flirtations with the big leagues (Batman, Watchmen, and RoboCop adaptations were all in the pipeline at one point or another) Aronofsky continues to plow away with his own hard-won brand of idiosyncratic cinema. Can a return to basics be radical, too? The most moving thing in The Whale (and it is sometimes moving) is an essay on Moby-Dick that Charlie reads to himself whenever he senses a heart attack brewing. “Ten men in a room trying to come up with their favorite ice cream are going to agree on vanilla,” Aronofsky said in 2014, “I’m rocky road.” Fair enough. But would ten screenwriters in a room not together whisper “rosebud”?

The Whale premiered at the Venice Film Festival and will open on December 9.