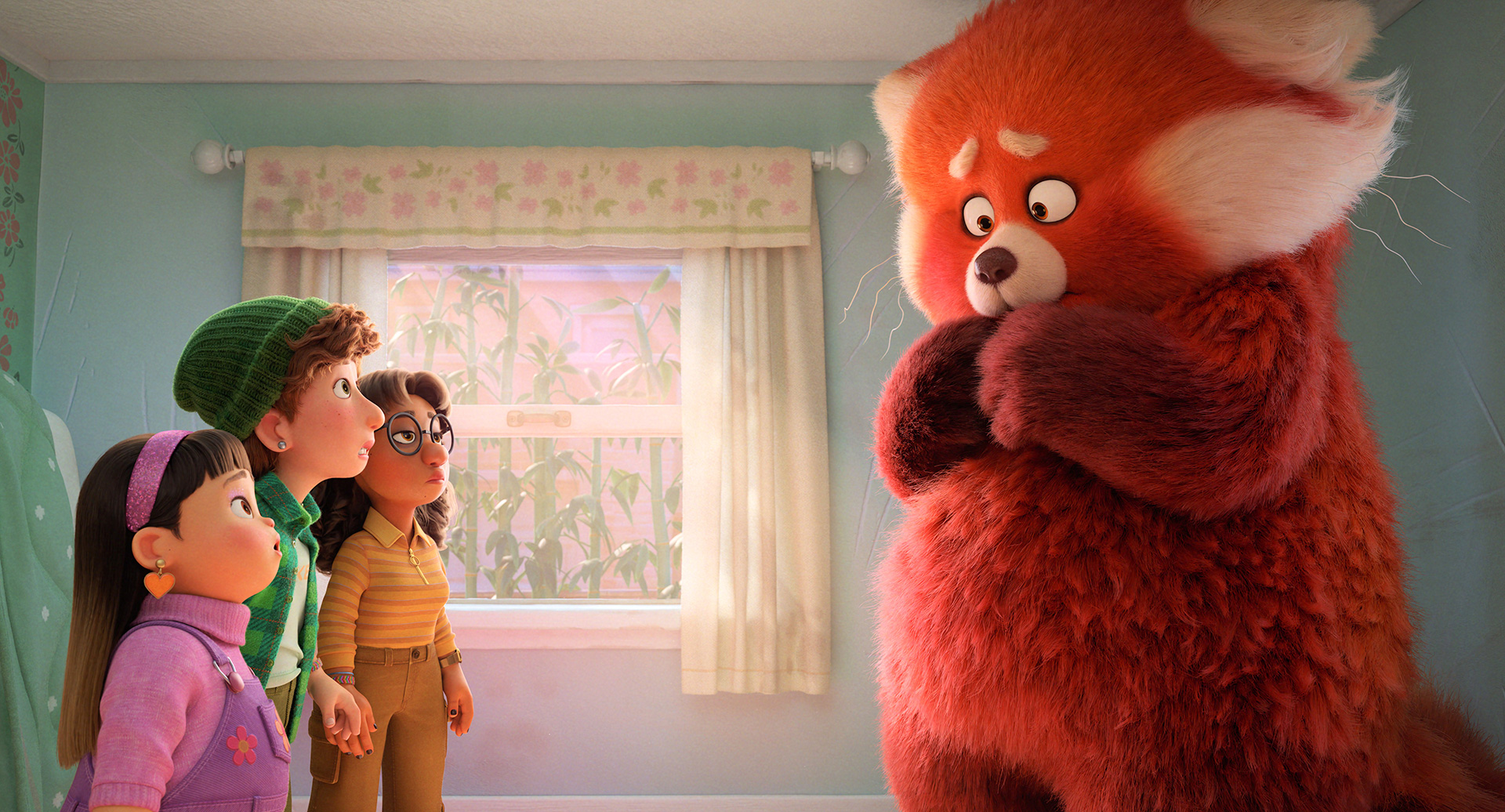 13-year-old Mei (Rosalie Chiang) has always been the perfect child. She respects her parents (Sandra Oh’s Ming and Orion Lee’s Jin), helps work the family temple (a tourist destination in Toronto), and makes sure to keep her grades impeccable (while also enjoying a litany of extra-curriculars to pad out that inevitable college résumé). And this is how she wants it. Or, at least, it’s how she’s wanted it. She looks up to her mother and is cognizant of the strain that’s kept her grandmother (Wai Ching Ho) away from them. The last thing she wants is for their relationship to fracture in the same way, but puberty has a tendency of upsetting such ironclad dynamics once hormones and emotions take hold. It’s time Mei put herself first.

Though this generally means ushering in a rebellious phase, Turning Red director Domee Shi and co-writer Julia Cho have a surprise for their young Mei Mei. While she’s always known that their ancestors had an affinity for red pandas (their temple is pretty much a memorial to them), Ming never told her that this obsession went beyond mythologizing. Turns out, every woman in their family has found themselves transforming into a red panda once the transition from adolescence to adulthood arrives. And not like a literal red panda you see in zoos. We’re talking giant-sized, fluffy, God-like, bordering on kaiju-style red pandas. It’s quite the inconvenience—especially when occurring without an awareness that it will. Luckily, a ritual can send it back to the spirit world.

Unfortunately for Mei, said ritual can only be performed on a blood moon and the next is a month away. So she’ll have to keep this beast inside her under wraps until then. While her parents worry doing so is impossible in a city like Toronto, Mei’s BFFs Miriam (Ava Morse), Priya (Maitreyi Ramakrishnan), and Abby (Hyein Park) have her back. Knowing their love is unfazed by this recent development is enough to keep her emotions in check and the transformation at bay. Setting a goal like their favorite band’s (quintet 4*Town, whose catchy songs are written by Finneas and Billie Eilish) impending concert a week before the ritual helps get her mind off it too. Mei’s panda might even be their unlikely key to attend.

You can relate this Jekyll and Hyde transition to many things. Shi and company make the obvious comparison to menstruation, with Mei’s initial fear causing her to lock herself in the bathroom and force her mother to that conclusion. A comment about their family’s pandas being accepted in China but not upon moving to Canada only bolsters the metaphor considering how patriarchal North America is when it comes to women’s health. But there’s also the easier correlation to autonomy. More than acknowledging Mei changes due to a heightened sense of emotional turmoil, we must be aware of why that turmoil has suddenly appeared. It’s a mix of lust, rebellion, and personal ambition. It’s about being who she wants to be and not always what Ming hopes she’ll remain.

It’s brilliantly shrouded by a self-fulfilling prophecy—a lie that Ming and her generation’s relatives probably don’t even realize they’re telling when it’s all they’ve ever known. The reason everyone wants Mei to keep calm and “human” is because the more times she changes, the more difficult it will be to successfully perform the ritual. Their fear is steeped in a belief the panda is an external force to fight against rather than an internal piece of their own identity they must learn to embrace. The longer it remains visible, the more control it wields. That’s only half-right, though. It’s not that the panda will force its will upon the host. It’s that Mei might realize she likes who she is with it at the wheel.

And why wouldn’t she? This isn’t a binary situation where she must choose between the doting daughter and fun-loving “freak.” Mei can be both. She can find compromise where none existed before. Her friends hope she will. They’ve never spent as much time with her as they have while exploiting their classmates’ love for the panda’s adorableness and they’ve never seen her so happy. Do those positives come with negatives? Sure. Mei has never been as aggressive or temperamental as she is in panda form and sometimes people get a hurt as a result. Shouldn’t she therefore learn how to balance these two worlds? Doesn’t Ming’s demand that she chooses exacerbate the problem, inching them towards a point of no return? She knows it does. She lived it.

Turning Red subsequently shines a light on what so many of us are guilty of doing ourselves: sacrificing our own happiness for others, or sacrificing others’ happiness for our own. Just because Ming’s panda destroyed her relationship with her mother doesn’t mean Mei’s will too. To move through life under that assumption will only amplify the animosity that renders it so anyway. There’s also a level of assimilation at play where Ming projects antiquated and foreign concepts of taste and “properness” upon a girl who wants the freedom to fawn over boy band hunks, dance to “stripper music,” and make mistakes. And none of that means Ming is wrong for doing the opposite. That’s her choice. She doesn’t have to embrace the panda to accept that Mei does.

It’s a wonderful allegory that, despite what some critics are saying, proves universal to anyone who has ever had to battle against culture, tradition, and guardians too entrenched in their own regrets and guilt to get out of their own way. That it embraces its Asian-Canadian-ness is a strength—it leads to representation (this city proves an actual melting pot of ethnicities), localization (Tim Hortons, schools named after Canadian politicians, etc.), and a unique perspective that allows Shi’s own personality to break through Pixar’s otherwise homogenous view of settings and characterizations. The humor is infectious, the pop-culture nerd affinity relatable, and the familial struggles resonant. And it’s messy because so is life. Its happy ending is about learning to listen. That’s how everyone wins.