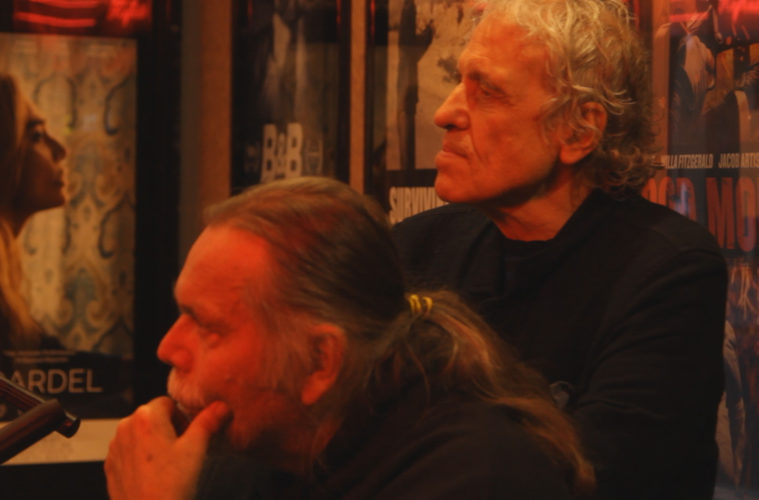 If anything, Abel Ferrara’s lovingly crafted personal documentary The Projectionist answers a question has plagued many a hardcore New York-based cinephile at one point or another: how the hell does the Cinema Village on 12th street stay open? While Ferrara doesn’t audit the finances of his subject–life-long movie exhibitor and real estate developer Nicolas Nicolaou–he never the less crafts a portrait of a man who has kept neighborhood theaters alive in the city, fighting it out with the big guns like Regal, AMC, and Landmark Theaters (the de facto new proprietor of neighboring Quad Cinema) for first run product. Premiering in Tribeca’s programming lineup This Used To Be New York, The Projectionist provides a personal history of running movie theaters through the changing landscape.

The film starts with a friendship between Nicolaou and Ferrara–always a lively presence in festival Q&As, occasionally taking on the persona of host, which he claims much of the film was left on the cutting room. A native New Yorker, Ferrara’s early pictures documented the gritty Ed Koch era in which Nicolaou cut his teeth as the owner of several neighborhood theaters showing adult and art films. In the 1980s the cinema landscape in New York changes as gritty neighborhood theaters are swallowed in a buying spree by Canadian chain Cineplex Odeon.

With a million-dollar check from Cineplex’s colorful CEO Garth Drabinsky (presented through footage from Barry Avrich’s documentary about him, Show Stopper: The Colorful Life of Garth Drabinksy), Nicolaou sets out to buy his buildings outright, rehabbing down-and-out theaters with new seats, carpeting, and presentation. He can only hold on so long before making personally painful calculation that in a hot Manhattan real estate market the buildings may be better served by another use. In the case of a theater turned lounge, he argues both serve as a purpose as a community meeting space.

See Also: Abel Ferrara on Finding Light in the Darkness, NYC Post-9/11, and the Realities of the Film Industry

The film opens in Cyprus where Nicolaou lives for a part of the year, running his empire remotely with the assistance of his children. He arrives in New York in 1970; attending college first, he’s drawn to the magic of cinema through the Upper East Side luxury theaters (like the still standing Cinema 1, 2, and 3) before cutting his teeth in an industry that at that time made little to no distinction between adult and art product. Operating the Union Square market near NYU, Cinema Village survives through a four-wall program (allowing filmmakers to rent the cinema to show their films) as well as nurturing other independent films in the shadow of 38 other first-run films that at one time were unable to play the same product. His other venues the Alpine in Bay Ridge and Cinemart in Forrest Hills thrive as neighborhood movie theaters with low prices, first run product, and new amenities.

The joy of Ferrara’s The Projectionist is simply in getting to know its subject. Fredrick Wiseman famously states he can find interesting characters at work in any situation and here Ferrara invites us into the living room of a man who shaped cinematic exhibition in New York City in both the pre- and post-9/11 era. Nicolaou is the kind of guy you meet to do business with and end up staying longer than planned just to hear him talk about the old days.

Illustrated with examples of films and historical research of the era, The Projectionist is a warm and rich documentary that should excite the kinds of New York City cinephiles that plan their weekend around four or five movies at various venues. While repertory and 35mm have made a big comeback in an evolving landscape that now includes an updated Quad Cinema, Alamo Drafthouse, and Metrograph, one has to pine for good ol’ bad days. Sure, the floors were stickier and seats didn’t recline but what a joy it must have been to curate your own adventure without the guidance of Film Twitter and Letterboxd.

The Projectionist premiered at the Tribeca Film Festival.