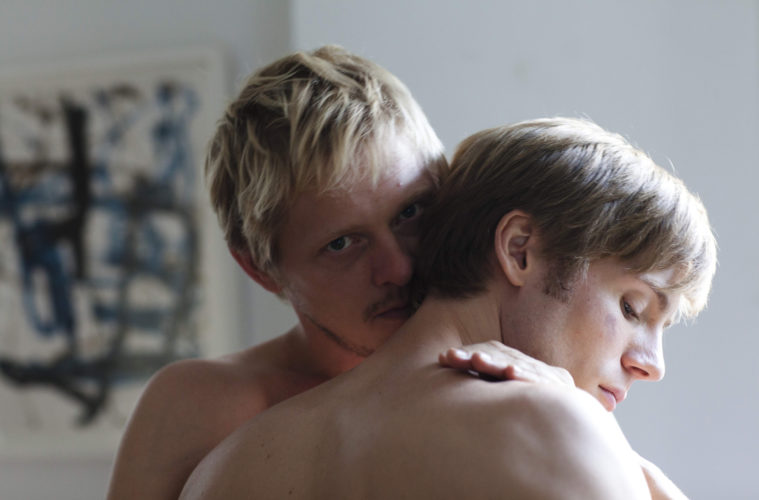 It’s rare in Hollywood to get a truthful, honest look at an extended relationship. The last stab, with The Five-Year Engagement, didn’t completely succeed earlier this spring, so leave it to the independent circuit to deliver something worthwhile. Premiering at Sundance, Ira Sachs’ drama about two men and many years of struggle in NYC, Keep The Lights On, went on to win acclaim not only there, but at other festivals and now it’s arriving in theaters next month. The first trailer has hit today on Apple, which shows a tender, intimate look at life and love. Check it out below for the film starring Thure Lindhardt and Zachary Booth.

Keep the Lights On chronicles an emotionally and sexually charged journey of two men in New York City through love, friendship, and addiction. Documentary filmmaker Erik (acclaimed Danish actor Thure Lindhardt in his first leading role in a U.S. film) and closeted lawyer Paul (Zachary Booth, Damages) meet through a casual encounter, but soon find a deeper connection and become a couple. Individually and together, they are risk takers–compulsive, and fueled by drugs and sex. In an almost decade-long relationship defined by highs, lows, and dysfunctional patterns, Erik struggles to negotiate his own boundaries and dignity while being true to himself. Keep the Lights On is shot with a grainy beauty that resonates with the texture of New York City, accentuated by disco beats and a mournful cello, both from musician Arthur Russell’s eclectic catalog. Director Ira Sachs’s fearlessly personal screenplay is anchored by Lindhardt, who embodies Erik’s isolation and vulnerability with a gentle presence. Harrowing and romantic, visceral and layered, Keep the Lights On is a film that looks at love and all of its manifestations, taking it to dark depths and bringing it back to a place of grace.