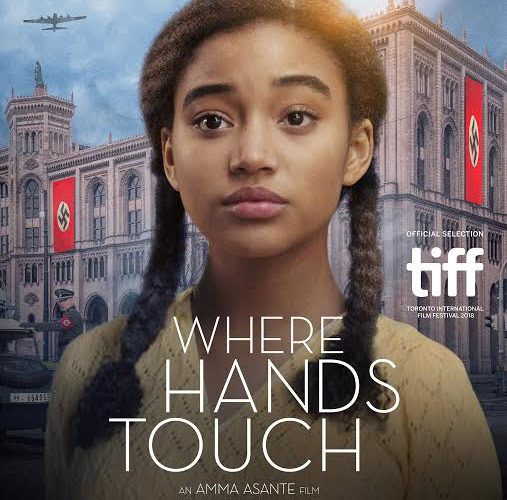 Now is not the time to make a film romanticizing Nazism or allowing anyone who donned the swastika during World War II a modicum of sympathy. I’d argue there could never be such a time — at least not for those who say they felt bad but still did nothing to stop the nightmare they helped usher into creation. Their cooperation in a genocidal extermination cannot be given a footnote for remorse. They cannot skate by on some notion that they participated unwillingly so as not to cement their own deaths and therefore be unable to “fight back.” The people dying didn’t have that choice. To say you killed some to save others is meaningless when your own life proves the first and only one to be guaranteed survival.

So it’s not surprising there’s been backlash to the trailer for Amma Asante’s latest Where Hands Touch. In it we see the beginnings of a forbidden love between a biracial German girl (Amandla Stenberg’s Leyna) and the white son of a Nazi (George MacKay’s Lutz). All the Holocaust motifs are present with Third Reich regalia and prisoners wearing the yellow Star of David. But while that evil, pain, and suffering abounds, somehow we’re to believe love will transcend. While innocent German citizens are led to slaughter, we’re supposed to be comforted by a boy who admits wanting to fight and kill his nation’s enemies (always labeled as Russians, never Americans or Allies) but can still see this girl as human. Is their love enough to forget the rest? The answer is, of course, a resounding, “No.” But here’s what the trailer doesn’t reveal: Asante agrees. Despite moments that risk subverting the vile treachery of Nazis in a bid to humanize this would-be soldier underneath his uniform, Asante refuses to erase the complexity of the situation at hand. As she’s spoken about before, this film is about identity above all and that goes for those looking down the barrel and those holding the gun. She’s not out to ask forgiveness or retroactively turn monsters into men. Asante merely wants to remind us that they were in fact both. She seeks to show how the half-brother of a black German (Tom Sweet’s Koen) could be indoctrinated despite his love and how a patriot could change upon learning the truth.

Leyna and Lutz’s love story quickly proves secondary to identity politics and the line we tell ourselves we haven’t yet crossed despite being well past its border. What makes this tale different from many other Holocaust accounts is that it doesn’t allow us to turn the carnage into Aryan versus Jewish. What we often forget in our desire to clearly delineate good against evil is that it’s never black and white. So by presenting a different target for the Nazis’ ire, Asante can delve deeper into the reality that Hitler’s first and most pressing foe was his own people. Without Leyna and Koen’s mother (Abbie Cornish’s Kerstin) to remind them that Jews are human too, they might easily condone concentration camps being the good Christian citizens they are. We’re therefore watching as two Germans learn what being German means. A lot of Leyna’s anger could be construed as being a product of her being stripped of her nationality. In her mind she is as German as the next. She loves her country and would feasibly do anything to protect it. This fact is for all intents and purposes the single thing keeping her alive. As long as she can falsely confirm she’s been sterilized (so as not to taint the German race with African blood like her mother), the Gestapo can ignore her. But once they’ve “cleared” the city of all Jews, that saving grace is no longer in play. No matter how much you’ve done for them, they’ll eventually come for you too.

As Lutz’s father (Christopher Eccleston’s Heinz) says, “You wear the mask that will get you through the war.” He fought in The Great War and admits he would’ve given his life for the cause. But now in hindsight he realizes the “cause” wasn’t worth the cost. It’s the type of admission that makes us wonder if we’re supposed to believe he’s learned — that pause being Asante’s intended purpose. She wants us to grant him room for introspection, but doesn’t ask us to throw him a parade afterwards. More than that she’s also crafted a morally conflicted journey for him to experience that should verify a pause was all she sought. He says these things not because the Holocaust is wrong, but because he wants to protect his son.

And that leaves Lutz as perhaps the most interesting character of all. He’s a patriot ready to go to the frontlines, look a Russian in the eye, and pull the trigger. His father has sheltered him into believing this war is pure: that the Jewish people surrounding them are planning a revolt and that Germany has every right to defend itself from them. So he’s okay rounding them up for labor camps. He’s okay with taking them out of the equation and making them work for the Reich. That is why he can look upon Leyna and see love. He can look past her skin because to him “Christian German” is all that matters. Rather than pretend he’s an ally, though, Asante ensures we know he’s merely naïve. They’re all naïve — everyone but Kerstin considering what her own forbidden love did to her family. They still believe they’ll get through this drama unscathed until circumstances are taken out of their control. The ramifications of what occurs between Leyna and Lutz therefore go much further than secret kisses in dark alleyways at risk of prison. Only when the war comes to Berlin and they’re taken away to experience the true paths Germany set before them can they understand their vision of themselves is flawed. Only then do they become that which they thought was a lie. And while our humanity binds us together, being human also means we’re flawed enough to do what’s necessary to survive. Neither Leyna nor Lutz is wholly innocent by the end.

However, they do both finally accept who they are. When all is said and done, they realize that straddling the line to somehow become the best parts of two worlds in constant conflict is impossible to sustain. The idyllic romanticism of the first half ultimately becomes just as fantastical as the colorful rainbows of light shining down upon these teens. Asante presents it this way so that we acknowledge how fanciful it was in the face of everything happening outside their bubble. That’s why the second half can prove as powerful as it does despite being as arduous as any other Holocaust drama and definitely more convenient in its orchestration. Rather than sanitize this fight with romance, Asante uses love to show how uncompromising and inexcusable war is.

Where Hands Touch screened at the Toronto International Film Festival and opens on September 14.