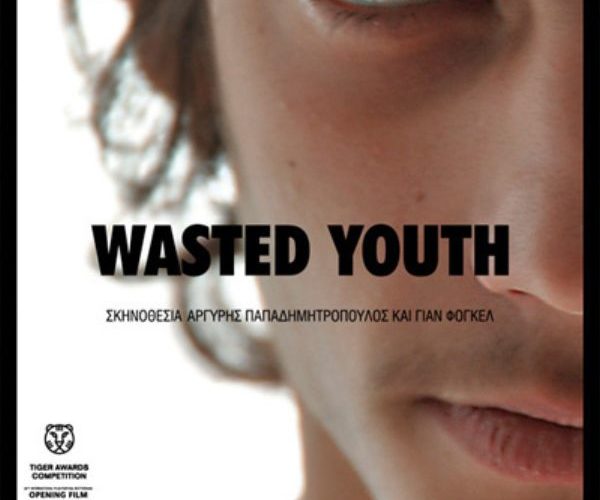 Wasted Youth is a curious concoction, a disaffected-teens drama with tragic consequences that feels a bit too familiar, yet mostly succeeds thanks to its setting, its acting, and an energy that feels palpable. Taking place in Athens, Greece, during one sweltering summer day, the 2013 Toronto International Film Festival selection from co-directors Argyris Papadimitropoulos and Jan Vogel is inspired by a true story that made major news in Athens, and it is easy to see why. The ambitiously (if frustratingly) meandering film climaxes with a sudden act of violence that seems both illogical and expected, and like the film itself, functions as a fitting metaphor for a country suffering from economic implosion.

Screening as part of TIFF’s “City to City” programme, which this year focuses on Athens, Wasted Youth is centered on two very different characters with one thing in common: their lives are utterly directionless. Harry (Harris Markou) is a likable, good-natured, rather ho-hum teenager saddled with a bullying father, a mother in the hospital, and no real sense of purpose; the sight of him skateboarding in an empty swimming pool is an obvious but effective metaphor. Meanwhile, sad-eyed Vasilis (Ieronimos Kaletsanos) arrives home from work as the sun rises, grimly undresses, makes a weak attempt at lovemaking with his wife, and finally stares at the ceiling, unable to sleep. Interestingly, we are unsure of Vasilis’s occupation until the one-hour mark of the 90-minute feature. When his job becomes clear — he’s a cop — we have a greater sense of how this story may turn out. Vasilis is a unique character, a dull, depressed, sad sack of a man. Whether he is turning a business opportunity and being told “Lie down then, and wait to die,” taking one of the most somber showers in film history, or chastising his teenage daughter for wearing headphones at the dinner table, Kaletsanos plays him as a believably tense character seemingly on the verge of explosion at any moment.

“Believably tense” is fitting, since believability and tension are paramount to the film’s success. While Vasilis putters around his family’s cramped apartment angrily, Harry skates into the heart of the city, visits his mother, makes out with his girlfriend (he is spurned in his attempt at going further), hangs out and parties with his friends, and is thrilled to print out some bumper stickers bearing the words “WASTED,” “YOUTH,” and “MALAKA” (wanker). As he and a friend plaster the stickers around Athens, we realize rather tame act of civil disobedience is the only sequence of unadulterated joy we see in the entire film. For Harry and his friends don’t seem to have anything to do, short of occasionally getting high and bumming around. It takes less than 10 minutes for the film’s first reference to the financial crisis, and once this occurs, it hovers over the proceedings like a thick fog, from bad one-liners (“He used to be 50 Cent; now, with the crisis, he’s 5 Cent,” jokes a friend of Harry’s mother to the hip-hop loving teen) to edgy conversations between Vasilis and his obnoxious partner; this is the anti-End of Watch. When Harry shouts “It’s the best day of my life!” near the film’s end, we find that very easy to believe.

Wasted Youth is an ideal choice for a festival like TIFF, as it feels like an authentic glimpse at life in a city far, far away. It is hard to walk away feeling the emotional jolt of, say, Fruitvale Station — a story with a similarly violent conclusion — and the fade-to-black is almost too speedy. But Papadimitropoulos and Vogel have created an undeniably memorable depiction of the havoc wreaked by financial collapse. Its characters are rudderless, adrift in an urban landscape of disarray, and the eventual outcome seems like the only one imaginable. In final analysis, the film’s definition of “wasted” is not what one might think. Sure, drugs and liquor are omnipresent, but to Papadimitropoulos, the real villain is a country that has failed its kids.

Wasted Youth screens at TIFF on September 11th and 12th. Watch the trailer above and click below for our full coverage.