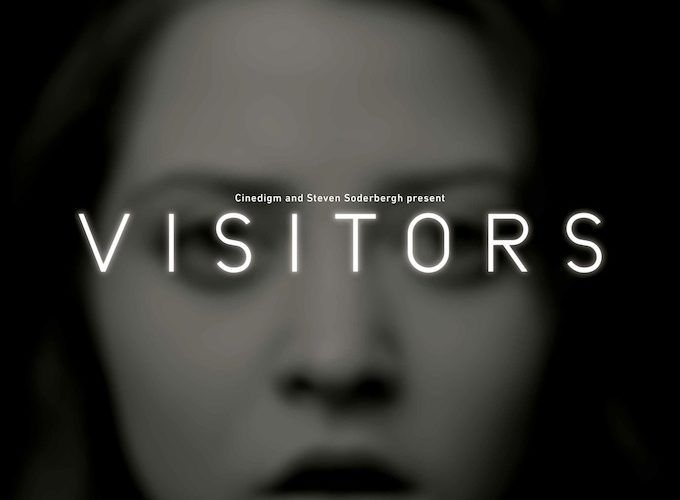 I entered the Elgin Theatre excited at the prospect of this once-in-a-lifetime opportunity: I was about to sit down and experience the world premiere of renowned experimental film director Godfrey Reggio’s newest introspective feature, Visitors. This would be completely new to me, never having seen his Qatsi Trilogy or either of Koyaanisqatsi’s cinematographer / editor Ron Fricke’s features. I’ve witnessed my fair share of avant-garde work before, though this was in a gallery setting, and knew to expect a meditative piece from its beautiful 4K black-and-white photography with Philip Glass’ score played live in the pit by the Toronto Symphony Orchestra. Steven Soderbergh said his introductions with Reggio, Glass, and producer Jon Kane standing behind him, the lights when down, the music crescendoed up, and I readied for the religious experience I was promised.

Well, it didn’t happen. Triska the gorilla looked gorgeous on the big screen in that amazing clarity, the series of faces which followed captivated my gaze as they, for the most part, unblinkingly peered back at me, and the architectural glorification shrouded in half shadows created by the sun was a brilliant juxtaposition of man-made worlds against vessels God or whomever created — a cycle of creation, stoic and unyielding. But none of it touched my soul as anything more than pretty pictures up on the screen to contemplate and endure with the hundreds of others sitting patiently with me, wondering what might come next. Would the motif change? Would motion be added to the static frames? Conversation? Interaction between the people, gorilla, buildings, and swamplands? No, we simply received more of the same.

If you found yourself in a trance and authentically moved by what you saw, all the power to you; I’m even envious that you had such a visceral reaction. To this writer, the only pay off comes from a final shot, which drives home Reggio’s idea of “the reciprocal gaze.” The rest was merely subtly moving still portraits, some boring / some curiosity-inducing / all monotonously exacting in their positioning and direction. Sure questions like “Is he yawning at me?” or “Is she smiling at me?” cropped into my head, but they were simply thoughts filling the void of its non-narrative collage of images. You can say this was, in fact, “the point,” but I won’t listen. If that’s what Reggio wanted to do as an artist, kudos to him. This review will, with any luck, give him joy to the fact that I reacted exactly how he expected. As a viewer, however, such a purpose is absolutely unsatisfying. Supposedly the director said afterwards, “If you saw the sunset with your sweetheart, you certainly wouldn’t ask him or her what the sunset means.” I’m sorry, but, while such quasi-pithy sentiments may seem profound, they can be construed as lazy, too. Those who were moved will nod in solemn acceptance while those like me will roll their eyes, either missing the point or understanding there isn’t any.

It’s all about venue, too. If I bought a ticket to watch this film at an art gallery where I’d receive a program book — the Toronto International Film Festival did provide one — and see an artist’s statement glued to the wall next to the screen, I might be more forgiving. To show it at a film festival in such a limited-edition manner — there were no other screenings, public or private — is, to my mind, somewhat ill-conceived. Your head is in a different mindset, and while such a divergent piece of formal magnificence may help shake some from their doldrums, it only made me wonder when an apex might arrive. It wasn’t necessarily dull, as the 87 minutes went by surprisingly fast. It just “was,” and, for a film like this, to exist isn’t enough.

There’s no questioning the stunning quality of its pieces, nor is there any denying the simple, high-resolution beauty put onscreen. I can even accept the idea of it supposedly making us be still, as though caught in the gaze of everyone four stories high looking down at us with their own judgmental expressions. But that point doesn’t really go anywhere. It’s made, we have our “a-ha!” moment, and then it continues on. Perhaps a feeling of futility is part of the purpose, too; maybe our expectations that more will come are supposed to be ignored in order for us to look deeper at the men and women we so quickly brush by without a second glance due to our faces being buried in social media and new technology.

While that unknowing used to invigorate me to scour resources and get to the heart of the art itself, I now merely shrug as I move on to the next new thing. I would never be presumptuous enough to say it’s complete BS and anyone who loves it is stupid — that’s the worst thing anyone could do in either direction. No, Reggio is tapping into the essence of faith and internal understanding with Visitors — and, whether he made it with specific meaning or not, the picture will find itself met with as many varied reactions as it gets viewers. I, sadly, wasn’t one of its champions, and doubt the general film-going public will be either.

Visitors premiered at TIFF and will open in February 2014. Check out our complete coverage below.