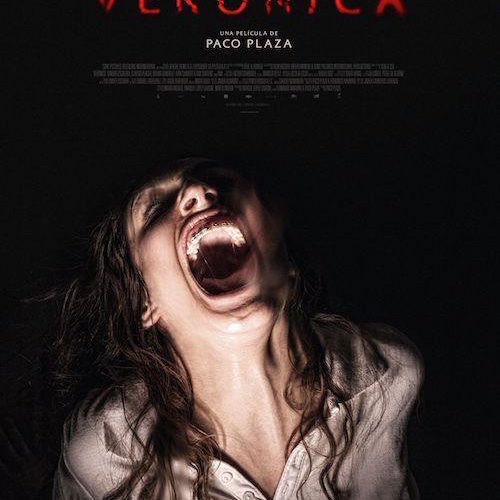 TIFF Review: ‘Verónica’ is an Intense, But Familiar Tale of Demonic Possession

The story goes that the police were dispatched to a Madrid residence in June of 1991 only to find a teenage girl screaming from what appeared to be self-inflicted wounds. Strange phenomena was seen/found throughout the apartment, so much that the detective assigned the case could do nothing but corroborate the paranormal explanation being delivered by those close to the family. Everything supposedly stemmed from a séance gone wrong three days earlier at the exact time of a solar eclipse. The teen hoped to contact her father only to discover it was something else that responded. A wild story to be sure, the simple fact it proved the first recorded account of the supernatural by a police officer in Spain made it worth a closer look.

The men who dug deeper: director Paco Plaza (one half of the duo behind contemporary horror classic [REC]) and co-writer Fernando Navarro. They took that police report and ran with it, staging the scene and rewinding back to when the terror began. The result is Verónica, a familiar tale of demonic possession and malignant intent. But while its journey contains many usual horror beats similar films have utilized for decades, the finale stands alone as an intense ordeal delivered in the same pulse-pounding way Plaza brought his zombies to life a decade ago. It’s not found footage, but the scene’s perspective definitely mimics that aesthetic as we travel closely beside the titular Verónica (newcomer Sandra Escacena) while moving room to room in search of her siblings trapped inside.

As is often the case, Verónica is a wholesome character we can relate to and respect as someone who doesn’t deserve the nightmare coming. She takes care of her twin sisters (Bruna González’s Lucía and Claudia Placer’s Irene) and their younger brother Antoñito (Iván Chavero) while Mom (Ana Torrent) keeps insane hours at the restaurant she runs to support the family. She pays attention in class (when not passing notes to her best friend) and shows a level of responsibility beyond her years. You can’t blame someone so pure for wanting to converse with a father taken from her too soon, except for the fact that she forgot to fully research what such communication needs for success. As Sister Death (Consuelo Trujillo) would say: always read the directions before playing with the occult.

What follows is pretty straightforward from Ouija board antics to the gradually increasing presence of evil. Whatever Verónica lacks in plot progression, however, it makes up with aesthetic. Plaza loves to supply us with unforgettable imagery from the solar eclipse casting a shadow onto Verónica’s shirt to the darkened blind eyes of Sister Death staring directly at the burning halo in the sky. The malicious force that has affixed itself onto Verónica is seen as shadow on walls when not obscured with poor focus in the distance, lurking as a gruesome three-dimensional figure charred and blackened beyond recognition. And despite there being plenty of jump scares sprinkled throughout, none feel cheap thanks to the dissolution of the line separating dream from reality a la Nightmare on Elm Street.

It’s a star-making turn from Escacena, her fear and determination authentic from frame one. Her Verónica is fully cognizant to the reality that she’s the cause of what’s happening and forever vigilant in her reactions. The children are first and foremost on her mind, their safety paramount despite the situation she’s wrought sounding too crazy for anyone to help protect them. We watch as the danger surrounds her, truly fearing for her life with no exorcist or investigator coming to save the day. The only way out is to get further in. So she reads more, discovers possible fixes, and enlists the kids into the cause being that they see and feel much of what’s going on too. But the demon knows. It toys with her in order to take them all.

Going back three days before the climactic battle of good and evil might have been a mistake as far as a build-up considering such a countdown’s inherent delayed gratification does prove frustrating. The extra time enhances Verónica’s descent towards desperation, but prolongs what we were teased with at the start. I don’t think the decision is rooted in history either as a quick Google search of “solar eclipse 1991” yields one result: July 11. It wasn’t seen in Madrid either, beginning in the Pacific before passing over Central America instead. But then I can’t find any mention of the possession either, so for all I know the whole thing’s been made-up. Kudos to the filmmakers for investing me so fully if true. But next time speed things up.

I say this because the end is extremely effective. The chaos, shadows, hallucinations, and screams are unleashed without restraint, the changing rooms and closing doors disorienting us enough to allow each reveal of the demon to fill us with dread. These final ten minutes or so are an adrenaline rush with foot on the throttle so that our eyes don’t have a chance to move away from the horror onscreen. Having this type of break-neck speed conclusion seems to be a pattern with Plaza (although [REC] is my only point of comparison), but who cares if it works? At the end of the day a horror film is successful if it can make your heart pound out of your chest. And for most of Verónica, Plaza and Navarro do exactly that.