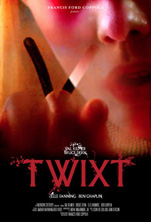 After a stellar career directing some of cinema’s greats—The Godfather, Apocalypse Now, The Conversation—you can’t blame Francis Ford Coppola for deciding to film smaller passion projects in his twilight. After the self-financed Tetro and Youth Without Youth, he returns with a story from an unusual origin. With an alcohol-induced dream in Istanbul, a vivid conversation with Edgar Allen Poe while a murder mystery happens as a backdrop, the impetus behind Twixt was born. Awoken before its end, Coppola scribbled down what he could remember and wrote a short story to convert into his script. Utilizing the parallel between Poe’s tragic loss of his young wife/cousin and the equally devastating accident that claimed Coppola’s son, the theme coming through the art is a wonderfully bittersweet idea that our loved ones get buried in our work. I admire the ability to allow his newest piece to double as a grave for his son, but while the sentiments are great, the finished product leaves much to be desired.

With income earned from his lucrative vineyard, Coppola spoke after the Toronto International Film Festival world premiere screening of his horror film about budget consciousness now being number one on his mind. He would love to have funding to create with impunity, but the reality of the matter is that those days are gone. Evolving his style to a more minimalist one as far as camerawork goes—he admitted there are only around five shots with a moving camera here—and realizing forty grand for a song was outrageous when he could record one with his cast instead, you can’t help but appreciate what this superpower of the medium has humbly been able to accomplish. Shot on his own soundstage at the vineyard and a sleepy town in Northern California, Coppola found the cast and crew he wanted and set out to recreate the inspiring dream from Turkey. He sets his own schedule, has complete creative control, and really appears to be having fun.

What is fun behind the scenes is not always that for its viewers. We learn what we’re in for at the start with a mixed bag of intriguing artistry and amateurish writing/orchestration. Swann Valley is entered with a gorgeous tracking shot through its main street. Empty storefronts and a lack of people express its ghost town aesthetic while Tom Waits’ narration tries to invent an allure of mystery. His cadence and tone are the perfect sort of creepy, wasted by the long-winded text stumbling along clumsily with innocuous details. It resembles the speech of a seventeen-year old Coppola making up scary stories for campers many decades ago, giving it a certain charm despite its crude meandering. But having it open a feature film eventually dealing with dark issues of death and guilt only exacerbates its triviality. This lack of polish in the dialogue is unforgivable and prevented me from giving my full attention.

I can, however, enjoy a goofy lead—the Stephen King knock-off Hall Baltimore (Val Kilmer)—because B-movie fare needs humor. Rooted in the frankness of reality enough to see through the absurdity of this town, he’s able to mock it with us during his descent into its horror story of mass murder. Needing to write one more supermarket best seller for his publisher before creating something closer to the heart, writer’s block hits hard just as his wife screams for money. Without an idea or even the means to find one, Baltimore pilfers the mind of an over-anxious sheriff named Bobby LaGrange (Bruce Dern). Holding the inane idea of a ‘vampire executioner’, inspired by the staked young girl cooling in the morgue, LaGrange tries to earn his fifteen minutes of fame while Baltimore strings him along. The author doesn’t think the idea is too bad, but in order to get an advance payment he’ll need a bulletproof ending. And that’s where Poe (Ben Chaplin) comes along in dream. Brought forth with a ghostly glow, Poe’s amber lantern leads Baltimore through time—yes, this is possible because the town’s clock tower has seven faces all with different readouts. They discuss inspirations and how to write a book by starting from the end, something even Charles Dickens once asked the master of macabre to teach him. A young girl named V (Elle Fanning) also arrives through these dreams, the ghost of a Pastor Allan Floyd victim. One of twelve murdered, she hopes to expose the horrors of her demise by traveling back in time to watch the massacre. The mysterious goth Flamingo (Alden Ehrenreich) from across the river is introduced; Ouija boards are used; and, unsurprisingly, the perfect end to the story for Baltimore’s book is unearthed. Each thread interweaves oddly, some proving to be completely unnecessary and others red herrings to keep the identity of the new killer secret. Sadly we don’t care about this revelation or whether Baltimore’s book gets made.

All Twixt does give us is the joke of its absurdity to laugh at as we wait for the end. Kilmer fictionalized version of Coppola is the bright spot, having fun doing impressions and wandering the tale; Anthony Fusco is fantastic as the pastor, the pedophilic undertones showing through; and Chaplin’s Poe is a stoic, expressionless visage of pure artifice—what we imagine he would be. Dern threatens to derail the whole train with his broad comic stylings as the inclusion of cameos from David Paymer and Joanne Whalley elicit grins. Fanning is creepy, the glow of her and the ghosts against the controlled blue filter a gorgeous effect proving some experiments do work. The same can’t be said for the overuse of split screen of the complete waste of 3D utilized for no reason. It’s all part of a strange whole that never reaches the heights of its concept’s potential. The endings verisimilitude almost makes it necessary viewing for the director’s oeuvre, but as a film outside that purpose, I can’t say it’s worth your time.

Twixt is playing at the Toronto International Film Festival.