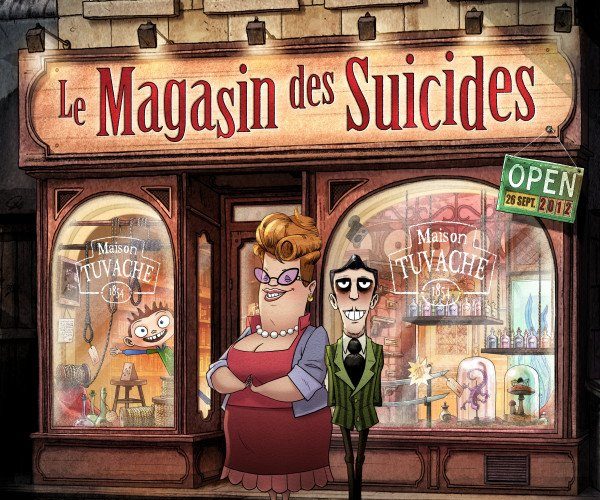 Like the animated films of Tim Burton and Henry Selick, Le Magasin des Suicides or The Suicide Shop, directed by Patrice Leconte, is a mixture of merriment and macabre themes. Adapted from Jean Teulé’s 2006 novel, The Suicide Shop is a musical about a shop that sells equipment for guaranteed suicide in an alternate version of Paris, where everyone is depressed and believes that there is no reason to live. Although this film aims to masks its funereal tone through music, its somber subject and political incorrectness are not for everybody.

In this version of Paris, killing one’s self in public is illegal and can yield hefty fines. Profiting from the abysmal environment, the Tuvache family encourages the use of their products to help people commit the act. The Suicide Shop, an extravagant and colorful store in a gray Paris, is ironically the liveliest part of the city. The parents Mishima (Bernard Alane) and Lucrecia (Isabelle Spade) run the shop and their two children, Marilyn (Isabelle Giami) and Vincent (Laurent Gendron), help the family business. After the introductions of the family, the shop, and Paris, Alan, the youngest child of the Tuvache family, is born. Alan is happy and cheerful, personality traits that are uncommon in society and are disapproved by his family, particularly by Mishima. As he grows up, Alan believes that it his mission to restructure this suicidal environment and to establish that living is the best thing in the world. He begins his purpose by sabotaging the shop, with the help of his like-minded friends.

Leconte uses song and ornamentation to help alleviate the dark subject matter of The Suicide Shop. The English subtitles happily rhyme, and the extreme portrayals of the characters are ridiculously silly. Alan is always jolly, perhaps because of the oppressive nature of his home. Although there are attempts to lighten the mood, suicide is a fragile topic, and this film may come across as offensive to some. The film’s moralizing attitude towards the third act also seems to trivialize those who are depressed. Producing a comedic musical out this sensitive subject perhaps makes it inevitable for this film to have politically incorrect material. Although this textural animation is computer-generated, it has a whimsical and illustrative two-dimensionality that helps reduce the film’s grim tone. If you watch this film in 3-D, the layers and planes of images move smoothly across the screen. The combination of this delicate topic and the absurd tone is definitely something we are unfamiliar with in animation. However, this uncanny film is withdrawn from reality, which could be cathartic for some viewers. The Suicide Shop is entertaining and ornate, but is too upsetting and morbid for some, even with its happy ending.