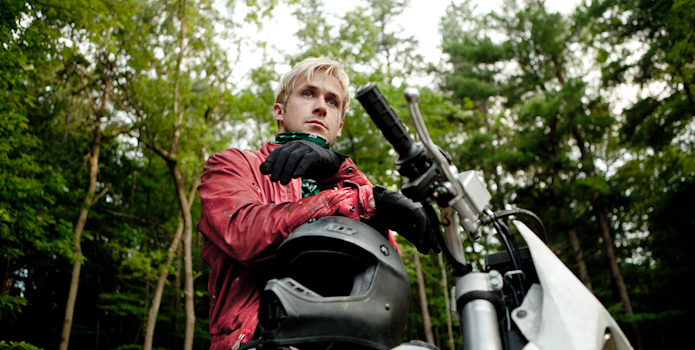 [TIFF Review] The Place Beyond the Pines

Retaining the gritty authenticity of his lyrically heartbreaking Blue Valentine, Derek Cianfrance‘s new insanely ambitious look into the nature versus nurture equation feels much smaller than its reality. It would be easy to say The Place Beyond the Pines gives us too much to process in too contrived a way, but I believe that would be too quick a judgment. Shifting character focus three times, the film will have you wondering if it would have worked better with an earlier ending. But then you’d miss the emotional ramifications man’s actions can cause—every choice a butterfly effect that alters lives and perceptions in irrevocable ways. How we react to our mistakes can go a long way towards assuaging our guilt or it may simply drag us down further to the point of destruction.

By far the best third, the opening story of Luke (Ryan Gosling) and newfound fatherhood causing him to quit his motorbike circus act shows us the damage a bad adolescence can breed. An uncut opening credits sequence that follows this troubled soul sauntering through amusement park games on his way to the steel ball he and two partners will death-defyingly drive their bikes around at high speeds sets the tone for the grave circumstances to come. Not a bad guy, Luke is a product of his circumstances who doesn’t know how to better himself until the not-so-chance encounter with a local girl he had a fling with arrives to turn his world upside down. Thinking this may be his opportunity to settle down and do what his father never did, this vagabond decides to put down roots and be a better man.

And by better man I mean a bank robber with new employer Robin Van Der Zee (Ben Mendelsohn). While Romina (Eva Mendes) has a new man (Mahershala Ali‘s Kofi) and isn’t looking for more than a branch with which to connect her son to his biological dad, she finds the lustful desire of this bad boy irresistible to ignore. So the film continues on with the mercurial Luke and his temper finding him on the wrong side of compassionate dad and smart criminal. Seeing the cash he acquires through Robin’s foolproof plan as a way to take Romina and young Jason away clouds his judgment, raising the stakes for the tragic consequences to come. We know he’s trying in his own warped way, but the lingering acknowledgement Jason would be better off with Kofi as a father becomes hard to ignore.

This extended vignette is only the beginning of what Cianfrance and scripting partners Ben Coccio and Darius Marder have in store. Darkly dramatic with its infusion of Luke’s violent nature into the peaceful home Romina had built, the filmmakers next show the flip side through the idyllic Cross family. Like the first act, this tale also involves a happy couple and their young son. Unlike Jason’s tumultuous upbringing, however, a police officer father (Bradley Cooper‘s Avery) and his loving housewife (Rose Byrne) seem to have it all under control. Smart, kind, and loving, you think of little AJ as the luckiest boy on earth. They’ll never go poor and he will have all the advantages Jason could never dream to find.

But Avery’s life isn’t as clean-cut as the surface would show and his drive for power masked by what outsiders see as a strong moral code find him in the middle of departmental corruption. A hero to his colleagues, Cross quickly discovers the awful truth about pecking order and utility that will always supersede labels. Ambition and a law background provide the means to prevail, yet good intentions only see him fall prey to the same hubristic errors Luke chose on the other side of the law. Both descend into fantasies of grandeur and are consumed, so it’s no surprise they meet in a fateful confrontation resulting in how their boys will be raised. Genetically bonded to their respective fathers, the environment thrust upon them due to Luke and Avery’s union ultimately decides their future.

Leading into a third act wrought from the choices of their parents, an older Jason (Dane DeHaan) and AJ (Emory Cohen) advance towards a collision of their own. This is the payoff of what came before and proof that our actions pack a powerful punch. Can the full circle narrative be construed as over-written and contrived? Of course it can. But do not let yourself deny Cianfrance’s message concerning the giant canvas of humanity and our respective threads composing it succeeds. This is a karmic rabbit hole dug by mankind’s selfish desires to be Gods and the collateral damage left behind when burned by the sun. A tome consisting of “what ifs,” The Place Beyond the Pines will either grab or lose you depending on whether you’re willing to take the plunge and accept the fateful ways everything connects or dismiss them as convenient artifice.

Honestly, I’m still unsure which camp I join because credence should be given to both. The epic scope of what Cianfrance has done is probably the most appealing aspect of the film while the orchestration bringing it to fruition leaves me somewhat cold. Perhaps it’s the very deliberate separation of character threads or maybe the precisely juxtaposed nuclear families so similar and different at the same time. We watch each family implode as a result of opposite paths and are left to wonder if their eventual overlapping conclusion is realistic enough to see the film as more than a parable. But that may be exactly what Cianfrance set out to do—depict our ability for destruction through love and show how we all must do better if we hope to endure as a species.

No matter your interpretations or acceptance of underlying themes, the ambition alone shows its director is not a one-hit wonder. This piece is created by a sure hand and meticulous mind, injecting the aesthetic with a grainy texture to enhance its fleeting existence and authentic emotions to force us into believing each second. Gosling is a powerhouse; Mendes perfects emotional fragility; Cooper sustains with a steady hand; DeHaan follows up Chronicle with a similarly unhinged vulnerability; Mendelsohn intrigues with wonderfully misguided compassion; and Cohen portrays the result of neglect and affluence beautifully via his unpredictability. Add a glorious soundtrack, a palpable foreboding from the titular pines, and a volatile air manifested by guilt and rage and you’ve got a uniquely tough yet memorable work that overcomes its shortcomings and refuses to let go.

The Place Beyond the Pines is now screening at TIFF and will be released in 2013 via Focus Features.