TIFF Review: The Inspection is a Work of Emotional Maturity 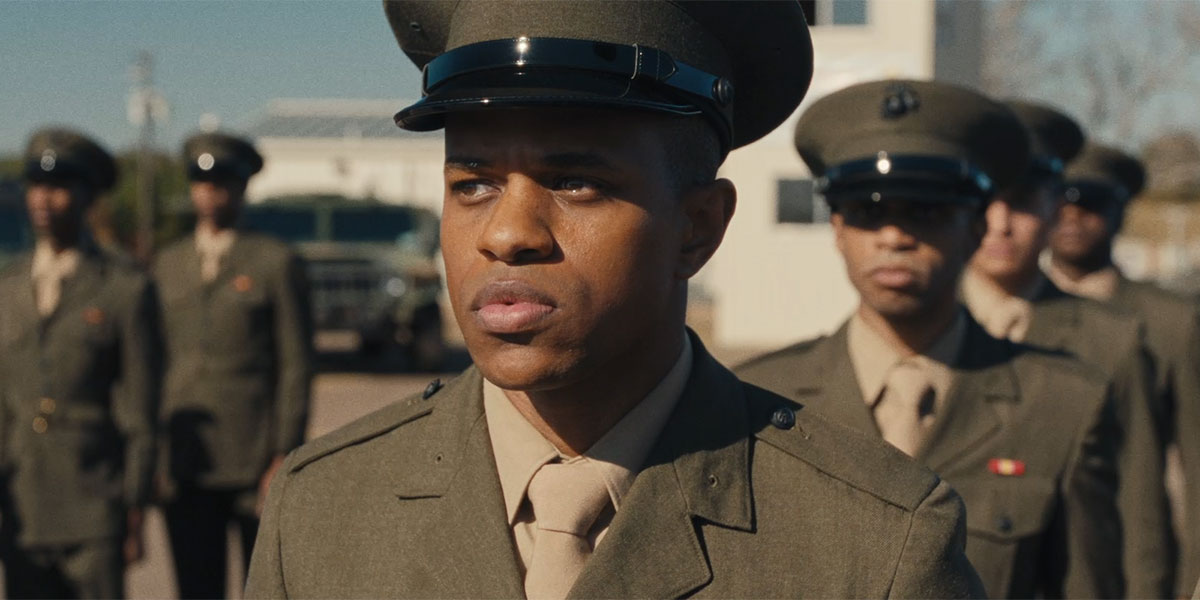 Positioned as a work of autobiography from first-time director Elegance Bratton, The Inspection is a flawed, if highly compelling promise of a new talented dramatist in American cinema. Bratton’s avatar in this case being Ellis French (Jeremy Pope), who we catch up with during his period as a homeless youth. Deserted by his unforgiving (yet of course Christian) cop mother Inez (Gabrielle Union) for being gay, he lives on the margins of society until making the last-ditch effort for redemption—or as he says, the chance to “die a hero”—by joining the Marines.

Ellis’ plan is nearly instantly foiled at boot camp when a gay day-dream (during which the movie almost promises to suddenly become a João Pedro Rodrigues film) leads to him getting an erection in the group shower, thus instantly revealing his sexuality to the unit. Becoming the literal punching-bag of his training, with only the superior officer Rosales (Raul Castillo) offering defense, Eliis takes the contradictory path of both suppressing his identity and growing into the non-self-loathing man he needs to be.

Initially there’s some worrying signs about this project—its stock-gritty realism, transparent effort done to de-glam the gorgeous Union, and not to mention hints of a vanity project when Ellis is consoled by an older gay Black man in a shelter who makes sure to note he doesn’t have to sign up for the Marines due to his beauty, intelligence, and unlimited potential. Luckily the rest mostly avoids such pitfalls, even if a few stretches are choppily handled, say the editing and direction in an underwater training sequence that comes off as strangely confusing in a rather straightforward film.

One of The Inspection‘s particular highlights, though, is Bookeem Woodbine as Ellis’ brutal Gunnery Sergeant Laws. A hard-working veteran actor who made an impression in everything from a number of network dramas to Busta Rhymes’ “Light Yo Ass on Fire” video is finally given the kind of roles his talent deserves. Taking a what seems psychotic character and not so much “humanizing” him as giving him enough smirking charm, you genuinely want to be around Laws even when repulsed by his words and actions.

If simply praising strong work by the cast is the sign of a modest film, it can be surmised that The Inspection doesn’t necessarily break any ground. In fact, it’s safe to say most of its liberal coastal elite audience will be inclined to agree with points about the toxic masculinity and oppression of the military against the LGBTQ+, Muslims, and the rest of the world’s marginalized groups. But Bratton actually seems to be getting at something a little more complicated (or, ahem, centrist) by the film’s end. For neither completely condemning the Marine Corps (which to some extent saved his life) nor the discriminatory mother he ultimately dedicates The Inspection to, it works as an admirable step forward from trauma instead of a more self-serving fire-and-brimstone sermon on everyone who served as an oppressor. For better or worse, it’s a work of emotional maturity.

The Inspection premiered at the Toronto International Film Festival and will be released on November 18.