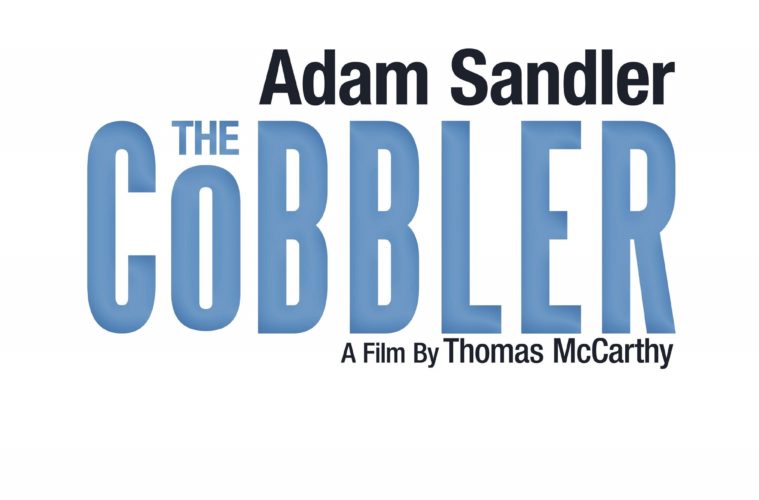 Adults need fairy tales too and Thomas McCarthy–with cowriter Paul Sado–deliver one in The Cobbler. They don’t try to pretend it’s something more, either, as its opening prologue can attest. We’re privy to older tradesmen on the Lower East Side speaking Yiddish around a table to think up a way to defeat the evil landlord raising their rent to drive them away. Cut to the local shoe man deemed their savior stitching up a pair of loafers with son in tow and we learn his machine has angel origins, giving it the power to render the cobbler able to literally walk in the shoes of his customers. Stitch them up, slip them on, and instantly he’s someone else.

Think the opening abstract expository section of A Serious Man, only with absolute clarity and a tone like the stories you read your children before bed and you’ll get the idea. Four generations removed, it’s now great great grandson Max (Adam Sandler) opening the store in present day. He doesn’t yet know of his family’s power since his dad (Dustin Hoffman) abandoned them years before. A schlub of a guy too soft-spoken and shy to do anything about his aspirations towards finding an identity away from the shadows of the Simkin patriarchy, he works until six, comes home to mom, and watches everyone else’s lives move forward. Like these stories are accustomed to, a fateful breakdown of Max’s stitcher has him going down to the basement to unearth that angelic contraption from the dust. On a whim he puts 10 1/2 size gators on his feet and voila, the formidable Ludlow (Method Man) is staring back at him from the mirror. Max of course goes to the shelves of deserted footwear to see which he can fit his feet in, walking the city for fun so he can finally not feel out place. He screws around with the barber next door (Steve Buscemi‘s Jimmy), stalks a rich guy (Joey Slotnik) to steal his shoes and drive his Mercedes, and even takes the young playboy who lives above the shop (Dan Stevens) for a spin.

McCarthy and company make sure the games don’t last too long as tragedy strikes to lead Max into being unwittingly embroiled in a real estate takeover cyclically reminiscent of his great great grandfather Pinchas. Grabbing his duffel bag of identities, this wallflower finds himself gradually evolving into the hero he was destined to become. Going up against the cutthroat landlord (Ellen Barkin‘s Elaine) turns out to be a comedy of errors in itself and the overarching feel good sensibility overshadows any of the darker moments that surprise. Laughs aside, though, the film is ultimately a drama with stakes. So why the filmmakers decide to end it all with overblown schmaltz I don’t know.

The Cobbler will probably be a PG-13 film and yet it goes into G-rated territory with its denouement. Whereas the laughter previously was for its authentic comical strain caused by the magical fantasy of its concept, the chuckles arriving at the end were specifically directed at the absurdity of letting all reality drop completely from beneath our feet. There seems to be a third act issue for McCarthy as a similar thing occurs in The Visitor when it’s nuanced look at immigration suddenly blindsides you with political rhetoric I simply wasn’t prepared to be spoon-fed. Max Simkin’s story was always going to end rosy, but I never expected it to come across as cheap too. Tonally consistent for everything that came before, though, the only other major gripe I have is with the inherent plot holes of its magic. The things Max does in the guise of others becomes very dangerous for the real people he is pretending to be. He kidnaps a gangster in Ludlow as a transvestite and in one instance his captive threatens his avatar and Max merely says, “I’ll take my chances.” I know the world created is heightened, but that’s a crap attitude to have when confronting bad dudes under the identity of innocents. Especially when Sandler instills such a strong sense of morality to the character otherwise.

Sandler is good and a perfect choice for the role besides the age disparity of casting Melonie Diaz as his love interest. He shows powerful emotion with his mother and effective comedy when forced to transform back into himself at inopportune moments. Because he’s often other people, however, the other actors equal his total screen time. Needing to mimic Max’s insecurities and lack of confidence, they each rise to the occasion with humorous effect. Method Man is the easy standout as a result, proving to be the most memorable piece of a film that embraces its slightness to warm hearts and lets the rest come what may.

The Cobbler premiered at TIFF. See our complete coverage below.