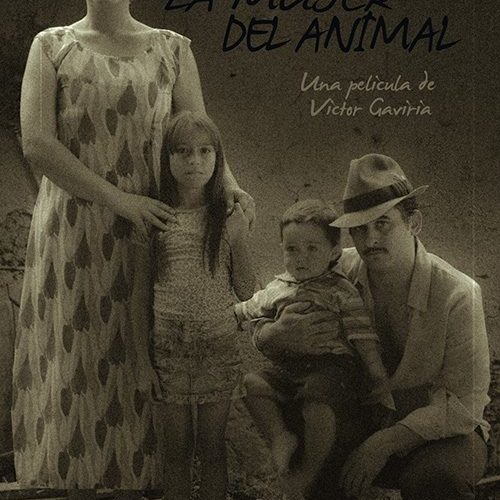 Colombia’s tourism department won’t be sanctioning Víctor Gaviria‘s The Animal’s Wife anytime soon and I definitely will never be visiting to see how accurate a depiction of life there it proves. This film is two hours of sadism at the hands of Tito Alexander Gómez Arias‘ Libardo ‘Animal’ Ramírez. He rapes, maims, drinks, and rapes again while every village he inhabits turns a blind eye out of fear of repercussion. If I could jump through the screen, steal his Bowie blade, and slit his throat I would. It wouldn’t be for his prisoner of a fake wife Amparo Gómez (Natalia Polo) either. No, I’d do it for the simple satisfaction of not having to wait for the only ending Gaviria could possibly provide. What is the message here? That the filmmaker’s homeland is a crime-ridden nightmare where honorable people are labeled cowards and victimized as monsters run amok? Maybe it’s to show us that we should never mess with God considering this whole escapade is the result of Amparo trying on her Mother Superior’s habit at the convent protecting her from a life of squalor. Punished and threatened with living under her abusive father’s roof, the eighteen-year old runs away to her sister Flor’s (Luisa Fernanda Valderrama Méndez) village. And by a stroke of horrific fate, Libardo just happens to be Amparo’s brother-in-law’s cousin. He sees he, wants her, and takes her. Let the nightmare begin … there’s literally no better word to describe what occurs.

The plot is about survival for Amparo and us. Caring eyes weep for her whether Flor, Libardo’s auntie Virgelina (Claribel Del Carmen Escalante Hurtado), or Adriana López‘s Amparo Suárez, the mother of one of this cretin’s other twenty-plus kids, but that’s all they do. There’s a nationwide manhunt for ‘Animal’ and yet everyone is too afraid to call the police. Libardo’s mother Mariela (Aura Pastora Méndez Suaza) is just as bad as him (and didn’t raise no snitches), so she and her daughter Olga (Yakeline Rojas Arango) are no help. We must therefore watch as the years go by and Amparo’s bruises increase. We must listen as Libardo tells the world he’ll be the first to de-flower his daughter and endure his attempt to do exactly that. There’s one redeemable character in this mess and his name is Diablo (Carlos Andrés Gómez Cadavid). He tells Amparo to let him know he she needs anything upon her arrival and threatens Libardo more than once with a machete to leave his young sister alone. So we’re cheering for “The Devil” to take out Satan’s literal spawn since hoping things turn around for Amparo is a futile exercise. She refuses to kowtow to her “husband” verbally, but has no choice but to perpetually endure his torture anyway. I think I may have sympathized with her more had she been hit with Stockholm syndrome to actually fall in love with the brute. At least then I wouldn’t constantly be wondering why she hasn’t yet killed him while he sleeps.

I cannot be objective enough to discern the production value or acting because I wanted it to end. That will probably make Gaviria happy to hear since I’m not sure he could have possessed any motivation besides making us squirm in our seats. He definitely gets to the heart of Colombian brutality and men rejecting humanity when a guy like Libardo is taking the heat. Hardly a cautionary tale for me considering I never wanted to visit what’s forever been painted as drug-lord country, but what about Colombia’s own citizens? I don’t see them needing it either as they’re surely aware of the situation. And if his depiction of the public’s fear proves authentic, they’d rather these horrors happen to someone else so as to avoid them themselves. At most I can commend Gaviria for making me feel such contempt. He gets untrained actors to deliver emotional duress well enough to conjure discomfort in everyone who watches. But there’s no suspense. There’s no drama. At best The Animal’s Wife is torture porn horror without all the blood and guts. It makes you cringe at the rape, abuse, and constant misogyny. It refuses to supply hope that Libardo will one day get his despite a comeuppance being the only logical result of the tears left in his wake. And if it does occur it can never be satisfying because we’ve become completely numb to the violence after thirty minutes. ‘Animal’s’ evil is rendered contextually normal so each subsequent kick or slap only earns indifference as a response.

I’d love to hear from a native Colombian after watching to see what they have to say because I’m not sure anyone could appreciate what’s onscreen. The reality depicted turns everyone into complicit demons doing Libardo’s bidding. His friends jump on the bandwagon to “enjoy” the spoils of his thieving and incestuous whoring, victims resign themselves to the nightmare as though God is punishing them for some unknown crime, and onlookers bury their heads in the sand in hopes his wrath doesn’t change trajectories onto their own porches. If ever we needed a pitchfork-waving mob it is now. Everyone knows about his terrorizing yet no one bands together to kill him for around ten years of monotonous brutality? Nothing about this film rings less true than his freedom.

The Animal’s Wife played at the Toronto International Film Festival.