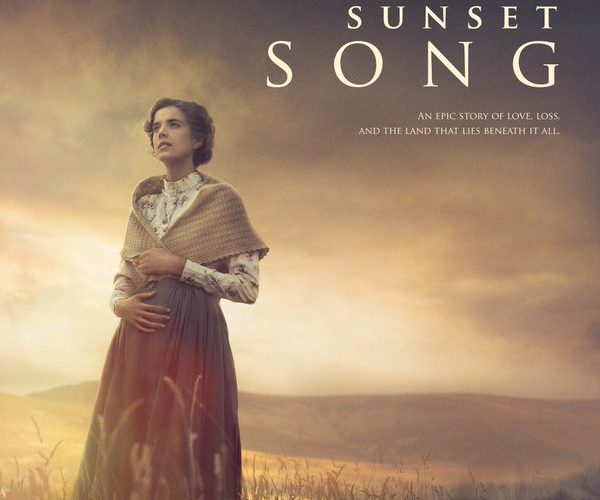 A tension is formed by a cut, quickly transporting our heroine from an expansive wheat field to a confined classroom. We’re not just talking the difference of 70mm for the former and the ARRI Alexa for the latter, but that of, to quote Kate Bush, the “sensual world” versus the punishment of destiny.

Based on a mainstay of Scottish classrooms, Sunset Song is a triptych of sorts chronicling farm girl Chris’ (Agyness Deyn) womanhood; the first deals with her abusive father (Peter Mullan) and the pain he inflicts on her and the others in the family; the second follows her falling in love and marrying Ewan (Kevin Guthrie); while the third sees Ewan enlisting to fight in World War I and coming back a violent man that resembles her father.

Even if the film is somewhat less impressionistic than director Terence Davies’ previous work, many compositions and gestures beyond just the easy-to-praise 70mm vistas feel destined to replay forever and ever in the mind; whether it be the camera hanging on Chris’ beaten brother even after the father has exited the frame, Chris and Ewan’s meet-cute (which is maybe the first ever in cinema history to feature hordes of sheep), or the silent-film-like animalism of Guthrie’s performance in the film’s concluding act. Or just perhaps the motif of Chris glancing at herself in the mirror throughout, seeing her naked now-adult body, or her in her wedding dress.

The camera movements take on a sensitive quality (retracting during a rape scene), but also the same bittersweet nature that’s found when swooping through the spaces of Davies’ childhood spaces in the “Tammy” montage from The Long Day Closes. The film’s many dissolves function similarly, particularly on Chris and Ewan’s wedding day, in which a full house of attendees singing along quickly transitions to just the newlyweds serenading each other.

The punishment and guilt of conservative Catholicism that casts a heavy presence over Davies’ body of work finds itself in the life of Chris and those who surround her; both the father and an angry priest during war time may use religion as justification for violence, yet there’s a spirituality exuded by Sunset Song. The best comparison one can think of is Dreyer, and not just in the superficial similarity of Ordet’s farmhouse setting.

Davies’ films have a tendency to flirt with miserabilism and self-pity, yet Sunset Song, despite every horrible thing heaped on Chris, is a film ultimately about the promise of reincarnation. In the first third, after her mother commits suicide, Chris wraps a book of her mother in paper, storing away the memories and, in some way, keeping her alive. The film as a whole feels like we’re having Chris’ descendants read her history aloud. A soul passes on, maybe just as a lone figure in a widescreen vista, her few joys in life fleeting, but still, she lasts forever.

Sunset Song premiered at TIFF and will be released on May 13th by Magnolia Pictures.