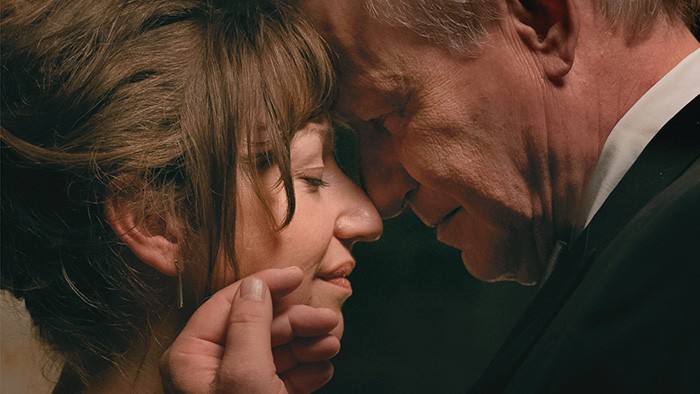 Tomas (Stellan Skarsgård) was married with three children when Anja (Andrea Bræin Hovig) met him. She didn’t want to fall in love, but twenty years and three more kids later show that’s exactly what happened. When Anja raised their babies, Tomas worked—a lot. When it was time for her to go back to work, she did too—a lot. Both alternated their career-motivated traveling so one could stay home and watch the family, a promise to be present at night with the kids honored by just her. Still unmarried (life always got in the way) and barely together emotionally, even their youngest (Alfred Vatne’s Isak) is aware their mutual affection has grown cold. And while a cancer diagnosis bridged the gap last Christmas, that distance quickly returned.

So when Anja discovers a metastasis has formed on her brain as a result of the lung cancer she beat exactly one year ago, the death sentence that comes with it shatters all façades. Regrets about whether she should have left Tomas years ago crop up. The difference in affection that she holds for her stepchildren and her biological children can no longer be mistaken. And she’s ready to deal with what’s to come without any support if that’s how things shake out. Once the medication kicks her butt, however, Anja realizes the “brave face” she prides herself on is waning. Pulling no punches, she tells Tomas that he doesn’t have to love her because she’s dying. But he does have to help her cope for the kids.

While writer/director Maria Sødahl never really leaves Anja’s side to focus on what Tomas is feeling, her film Hope makes certain we know. It’s in the big things like his tearful breakdown when the doctor gives them the test results and the little things when his usual workaholic nature is subverted by showing he’s been Googling experimental treatments. Where Skarsgård really shines, however, are those moments where he can do nothing but stare back at Anja and realize that the words she speaks are true no matter how much they hurt. That’s not to say she’s absolved of blame for what’s happened to their union, but instead that he’s deluded himself into thinking things weren’t so bad. He must do better now, but he might be too late.

Why? Well, how does that look? How can Anja not see his attention and warmth as evidence that he chose not to be that way when they were both healthy? We like to think such a thought is irrational, but we also know a part of Tomas agrees it’s true. Was it purposeful? Probably not. But that doesn’t excuse the fact that they’ve grown apart to the point of seeing their life together as one of convenience. It’s simply nice to have someone else to pick up the slack at home while they’re off in a foreign country committed to their passions. That Sødahl writes this story with the authenticity to confront such realities via characters unafraid to air their frustrations and accept them without judgment is revelatory.

For two hours we watch as the days tick off from just before Christmas (Anja’s return after the opening of her new dance production abroad) to the operation she’ll need to (potentially only briefly) extend her life a few days after. It’s a roller coaster of mood swings and deception, honesty and guilt. You have the children digging into their mother hard only to be confused when she leaves the room crying; Anja’s sister Vera (Gjertrud L. Jynge) talking about taking the kids because Tomas could never cope alone; and the numerous people voluntarily brought into their lives with varying degrees of candor (doctors, priests, counselors) that often provide more harm than good. And in the middle are Anja and Tomas perpetually rubber-banding back and forth.

I’ve mentioned how great Skarsgård is in those quiet moments of self-reflection and empathy his Tomas previously avoided, but it’s Hovig who stuns in the loud exchanges catalyzing them. To get him to provide his undivided attention is to let loose and say all the things that have been pent-up inside for years. Anja has so much sorrow and anger at what’s happening because this was finally her opportunity to excel and move forward with her career. She’s getting stellar notices about her show, the kids are doing well, and Tomas can remain busy without her being sidetracked. How could she not shout at the heavens about God’s poor timing? How could she not question the love from those who’ve suddenly softened overnight in response to her fate?

Hope begins with the words “inspired by a true story” and you can’t help scratching your head about why until learning that story is Sødahl’s. I don’t know what role is hers (the press notes don’t say anything about it and the publicist’s description only states that her life was the film’s impetus), but you can tell how deeply connected to the drama, pain, and promise she is thanks to the immense care that’s been taken to let its complexity breathe. Unconcerned with happy or sad endings (or endings at all beyond the desire for one to be shared and enjoyed to its fullest), she focuses instead on the unbridled emotions that swirl within us on the difficult journeys through tragedy. Nothing is out of bounds.

If Anja needs to scream—go for broke. If Tomas wants to let his heart speak—damn the consequences. There’s no manual for how human beings should react to this situation, so judging these characters as if they’re right or wrong would be a disservice to their grief. We’re literally watching as a lifetime of unspoken angst is released in a week. Toes will be stepped on and feelings will be hurt, but none of it renders their underlying devotion false. Both Anja and Tomas will have to take worse than what they give and yet neither meets any attack with force because they understand. So it isn’t too long before the film’s title proves less about miracles and more about hoping those left behind will be okay.