TIFF Review: Snow and the Bear is a Compelling, Chilly Mystery 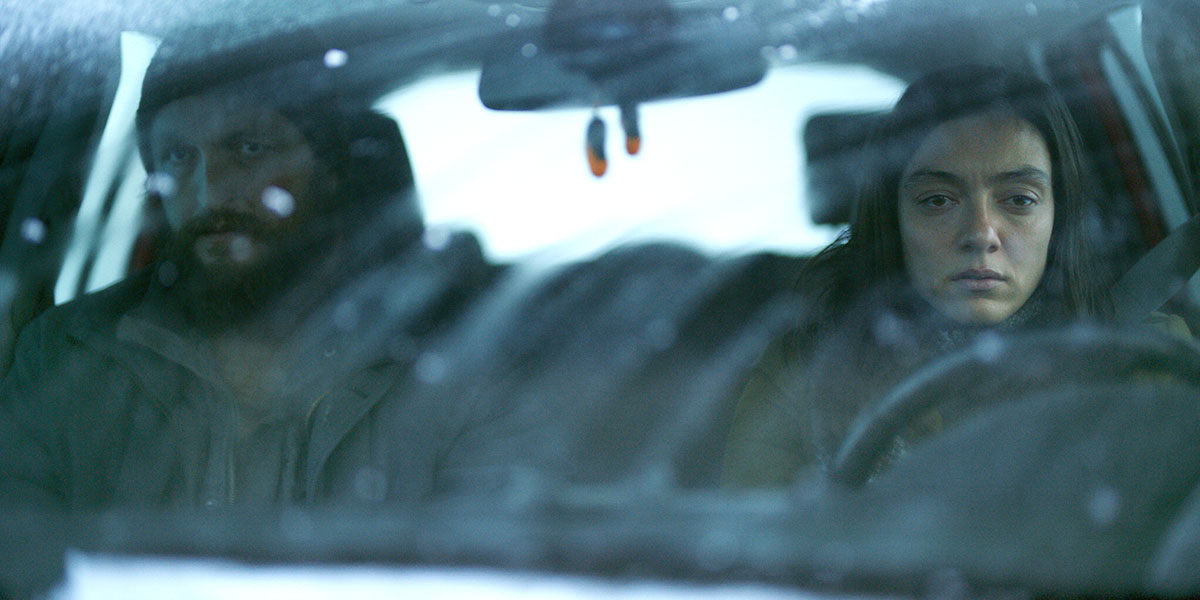 Asli (Merve Dizdar) didn’t have to come. It doesn’t matter that her compulsory assignment as a nurse was to be stationed in a small Turkish village in the middle of nowhere. Her father had strings to pull to get her reassigned. The reason she went anyway isn’t about not wanting to cheat the system like her parents think when they blame “stubbornness” as the cause of their fear for her safety due to blizzards and bear attacks. It’s because Asli doesn’t want to feel as though she needs protection. She doesn’t. She’s an adult woman who understands all too well the implicit patriarchal demand for compensation that comes with good deeds—that sense of feeling trapped, always owing. She’s tired of not being respected and having no control.

It’s that sense of always being on alert that drove director Selcen Ergun to make Snow and the Bear. During a post-screening Q&A she said this feeling sparked the process before her thoughts about humanity’s treatment of nature helped her and co-writer Yesim Aslan bolster the suspense for how that fear could be augmented by the overarching philosophy of mankind’s need to bend over backwards to blame someone (or something) else rather than own up to their own responsibility. It’s therefore only natural for Asli to be angry when the townsfolk disregard her medical advice while the doctor is stranded in snow a town over. And for her to panic in response to the unyielding aggressive entitlement and hospitality supplied to her upon arrival.

What happens as a result, while tragic, is therefore an accident. Ever since Asli came to town, the residents have warned her about going places alone. They assume she’ll get lost or that the relative of a bear killed earlier in the year by local butcher Hasan (Erkan Bektas) will attack. The only danger she actually finds, though, is them. They’re the ones skulking in the dark, popping up everywhere she turns. They’re the ones quick to dismiss her as an outsider who both doesn’t understand their strength against the elements and is too weak to match that constitution when she dares to act autonomously. So it’s impossible to know who to trust and even more impossible to bestow any benefit of the doubt. She’s in foreign territory.

Can she trust Hasan? The womanizer who “knows what’s best” when making his pregnant wife (Asiye Dinçsoy’s Cemile), who’s prescribed bedrest so as not to lose the baby or her own life, work the shop on her feet? How about Samet (Saygın Soysal)? The kind soul everyone treats like a simpleton who’s never far away when Asli needs assistance? Mahmut (Muttalip Müjdeci) proves the likeliest ally as de facto town elder with a finger on the pulse of everything that goes on inside the village. He attempts to even facilitate a truce between those other two after a tricky situation causes the neighborhood to mistrust each other. Samet turned Hasan in when he killed a bear because they’re protected by the government. And now the village is cursed.

When Hasan goes missing, the rumor mill accordingly swirls. Did he abandon his family again? Did Samet murder him after an escalation of their rift? Did the other bear whispers have been saying is coming near enact revenge for the murder of its kin? Every conclusion imaginable is put on the table; each one is feasible depending on who you ask. Shouldn’t “accident” be the top assumption, though? Shouldn’t everyone be innocent until proven guilty? In a perfect world, maybe. But anyone telling you we live in one is lying. The result is thus a tense escalation of danger with Asli caught in the middle. She’s theoretically an objective observer—except, of course, she’s also a woman. She cannot afford to pretend any of them is innocent.

What’s great about Ergun’s pressure cooker in sub-zero temperatures is that she shouldn’t be able to pretend she’s innocent either. Snow and the Bear is structured in such a way that even Asli could be the reason Hasan disappeared. Just as she can’t trust those around her to not be the cause, however, she can’t trust them not to turn on her if she was. Because who’s she to them? Nobody. They already don’t want to listen to her diagnoses, why would they listen to her when she says there was no intent to injure in her actions? Suddenly all the people who saw each other out that night are as much each other’s alibi as each other’s executioner. It’s why blaming the bear solves all their worries.

It’s what we do. Pass the buck. We lord our superiority over nature in one breath and deny we have the power to change it in the next. Men do the same to women, seeking to dominate and steal their power before blaming them for daring to think they could possess it in the first place. We create enemies in order to absolve ourselves of guilt, knowing full well that we’re the ones who manufactured the conditions that force them to fight back. Survival perpetually becomes paramount to truth. Even more so when you’re isolated in the dark with nowhere else to turn. That’s where Asli exists (uncertain what man will accost her in the street). Same with Samet (the town pariah blamed for everything) and the bear.

Ergun presents it with the harsh sound of wind whipping through apparently serene landscapes that hide the potential for violence we all know exists regardless of evidence. And those with the most to lose prove to be those with the answers the others seek. Do they speak or stay silent? Put yourself in their shoes and register your impulse. Pay attention to the details of the circumstances, too—some of these characters confront an almost identical situation twice with opposite responses. The reasons are valid too since we live in nuance. Dizdar and Soysal brilliantly deliver what that means via complex performances breathing life into morally imperfect people reconciling the prejudices held against them with the difference between wrong and right. Nothing is ever black-and-white.

Snow and the Bear premiered at the 2022 Toronto International Film Festival.