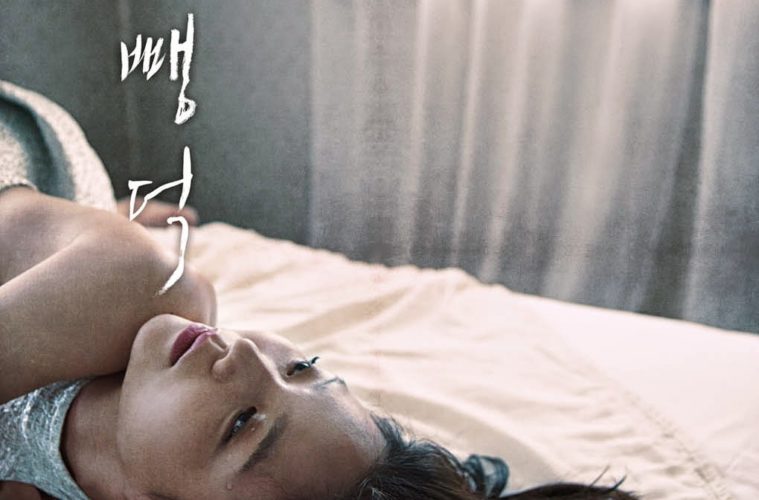 Can a movie have too much scope, too many twists, or too much sex? These seem to be the questions which drove the creation of Scarlet Innocence, and to all of them the implied answer was, definitively, “no.” This is a beautiful-looking film with eroticism and drama to spare, and despite a slight bit of drag in the second act, it never fails to both enthrall and entertain in equal measure. Based on a well-known bit of Korean story, this is a fairy tale told through the lens of wicked, winding nightmare.

The story begins with Hak-kyu (Jung Woo-sung), a young, disillusioned professor of literature, leaving the urban embrace of Seoul and moving into the country. Dogged by a scandal he claims is a lie and taken with the kind of ennui that only the intellectually disaffected can truly understand, Hak-kyu is hoping to write a novel while teaching the art of novel writing at an extended learning annex. The plan is thrown for a loop when he runs into Deokee (Lee Som), a kind and trusting young woman who is taken with him and begins to try to insert herself into his life. Here begins the story of a callous and selfish man failing to realize the extreme liberties he is taking with a young woman, and a young woman who believes that the concept of love is enough to break bonds and form new realities from whole cloth. The way the story is told, with both tender and furtive character moments and lush photography, frames the entire span of their love affair as a kind of gilded ideal. Their first encounters are sweet and humorous, spiced with the kind of emotional resonance that can only come from two incomplete souls. It soon becomes clear that one of these people is an emotional glutton, while the other is suffering an emotional famine, and when this disparity is revealed the repercussions are extreme and far-reaching.

There is a sense of melancholic revery running throughout the entirety of this film, one which seems to spread tendrils around every moment and leech off of the joy and happiness at the beginning to repay it with heartache and torment at the end. To give away the places that this film goes would be criminal in the extreme, but suffice to say that in the world of this film, no bad deed goes unpunished, and there are plenty to go around.

This is also the rare film where sex is used as more than a time-filler or commercial ploy to wring a few more bucks out of people looking for either titillation or a conversation piece. There are both real character moments and real character growth in these scenes, and for all of their explicit content, they never feel as though they could be replaced or trimmed. It is the rare film that creates a moment of intimacy that truly feels essential, and yet here is a prime example. Our lead actors share a stunning chemistry, and the scenes between them shift and warp in ways that leave one hungry to see where their characters will go from scene to scene. It is their bizarre dance that carries the film through the shaggier sections. It is a small miracle that they are able to keep consistent characterizations while the the story and the feeling of the film shift so wildly.

Director Yim Pil-sung manages these intense swings in tone with a deftness that would make the greatest cross-genre directors envious. From scene to scene he paints a compelling portrait that is at once in the spirit of the moment while still in keeping with the whole of the film. His handling of the material makes what should be a melange of styles and emotions into a surprisingly harmonious single piece. This is a film that should please both fans of Fatal Attraction and Oldboy in equal measure, which is the sort of crazy combination so daft and brilliant that one might question if it’ll work. In Scarlet Innocence, when it works, it works in spades.

Scarlet Innocence premiered at TIFF. See our complete coverage below.