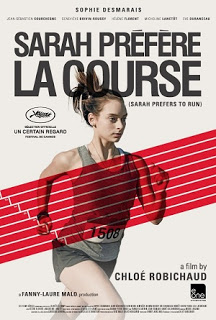 You have never seen a main character quite like the eponymous heroine of Sarah Prefers to Run, a smart, unique, semi-satisfying Toronto International Film Festival entry from first-time director Chloé Robichaud. She is a successful 20-year-old middle-distance runner in Quebec City, a quiet, introverted individual who is introspective, a bit pessimistic, slightly odd, and very, very hard to read. So, too, is Sarah Prefers to Run. It possesses an inherent subtlety that feels believable, and right, yet that subtlety keeps the film from coming to any logical conclusion. Happily, Sarah herself is so spellbinding that she keeps the film watchable and involving from start to finish.

Robichaud, the director of several shorts, has a stunning eye for shooting action. That is evident from the gorgeous opening of silent runners, and the sound of sneakers in motion. We can see the physical exertion in their faces, often through the use of hand-held cameras. It feels like this is the nitty-gritty of running, and this is where Sarah, played in a stunning performance by Sophie Desmarais, feels most at home. A short time later, she chats (barely) with Zoey (Geneviève Boivin-Roussy), another runner who seems like Sarah’s opposite: confident, self-assured, direct. It is a friendly but slightly strained conversation, and it is hard not to notice how much more intense Sarah seems while running. We start to get a sense of Sarah’s life, and why running is her safe haven, after the opening race. Her disinterested mother greets Sarah’s statement “I came in first” with silence — not even a compliment. And Sarah’s announcement that she wants to attend McGill University in Montreal draws exasperation from her unhelpful mother: “Running is not going to put food on the table.” For Sarah, however, there is no debate: “I plan on going. I want to run.” Her path to McGill, surprisingly, involved a coworker, Antoine (Jean-Sébastien Courchesne). He, too, wants to move to Montreal, and his plan for the duo to move in together makes financial sense.

Antoine is a likable but strange character. He proposes that he and Sarah get married for government assistance, and Sarah agrees that it makes sense. But his interest in Sarah is clear from his first scene — it is no surprise to the audience that he actually wants to wear his wedding ring after their marriage. The question of who Sarah is actually interested in is a tricky one. Sarah Prefers to Run is not a coming-out story, yet she has strong feelings for Zoey, perhaps romantic ones. It is a fascinating situation, so much so that a subplot involving Sarah’s heart problems feels perfunctory and unnecessary. After all, her burgeoning relationship with Zoey is much, much more involving. Why Robichaud included this element is unclear. As the film moves toward its end, Sarah is asked “What’s next for you?” This question becomes the theme of the last 30 or so minutes. It is never quite answered, and Sarah ends on an unsettled, rather unsatisfying note that does not seem inappropriate, but does feel sadly abrupt. Even so, there is much to praise, starting with the performance of star Sophie Desmarais. Watch the way her eyes widen, or her body language during conversations with Zoey and Antoine, respectively. Watch her look of surprise when asked if she is proud to be a Canadian athlete: “I’m proud when I beat my times and win my race,” she says, in typical Sarah fashion. As a director, Robichaud is unafraid of silence, and lets Sarah’s tale progress slowly. That is wise, because Sarah is the latest in a long line of fascinating onscreen runners. If her film is nowhere near as successful as the best of these — The Loneliness of the Long-Distance Runner, Chariots of Fire, the underrated Without Limits — it remains a solid debut for Chloé Robichaud, a simple, unaffected story, well told and well acted. Above all else, it represents a major achievement for young actress Sophie Desmarais, easily one of TIFF13’s breakout stars.

Sarah Prefers to Run screens at TIFF on September 12th and 13th. Check out the trailer above and our complete coverage below.