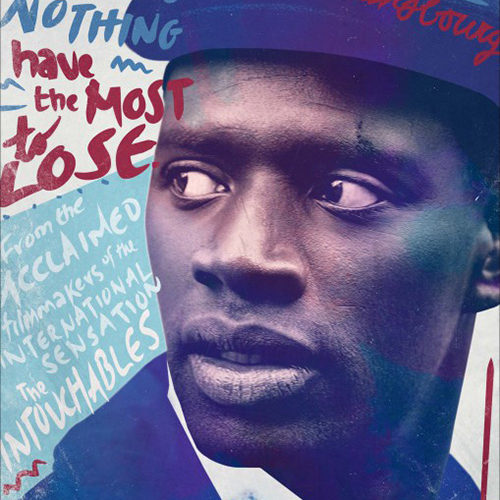 Every movie should have a score by Ludovico Einaudi and it’s comforting to see Olivier Nakache and Eric Toledano agree. After using his haunting music on the skillful Intouchables, the duo take a few tracks from his album In a Time Lapse to enhance their latest work Samba. Another drama dealing with serious issues that are oftentimes handled melodramatically, they find a way to infuse each character’s hardship with a delightfully comic streak. The formula is similar to that box-office record-break, with its two broken souls coming together to make the other a better person, but you won’t hear me complain considering there’s just as much heart. And with a little romance thrown in alongside a couple larger supporting roles, one could say the filmmakers have increased their cinematic scope while retaining equal emotional weight.

Omar Sy’s role mirrors this expansion being that his Samba is once more troubled and at odds with the law. This time he’s less in need of a calming element than he is a consistent personal identity. A Senegalese refugee in Paris illegally, the opportunity to advance in his occupation flags him by the authorities and lands him in jail with threat of deportation despite ten years of residency. Assigned a caseworker to help (Izia Higelin), it’s her new charity-working shadow who truly makes an impression. On sabbatical from the business world–the cause proving she’s the one in need of tranquility–Alice (Charlotte Gainsbourg) can’t avoid feeling for Samba’s plight. Warned not to get too close, they inevitably do just that. But while a relationship is blatantly foreshadowed via a cute awkwardness between them, it’s assurance never distracts from the deeper issues swimming right beneath the surface. It’s through Samba’s uncle living legally as a sous chef that we get at the heart of the film. He’s warned his nephew how to keep his nose clean and work towards papers, but the boy cannot leave his home in the past. It’s only now with the possibility of going back so strong that he takes off his Signet ring, throws away the jeans, and carries a briefcase to try and fit in with the European crowd. By this point, however, paranoia sets in to as he fears someone will see through the ruse and turn him in. And once Alice explains he must hide in plain sight for a year before re-applying for legal status, he literally has nowhere to go. New friend Wilson (Tahar Rahim, in a complete 180 from his usually reserved roles) looks to keep him loose and employed with odd jobs, but at a certain point their luck must run out.

As we watch Samba’s evolution pushing him towards complete disillusionment, Alice’s own bout with personal crisis plays in the background. Easily frustrated and the definition of a burn-out due to long hours working without recognition, the idea to work with underserved immigrants may not have been the best choice. The directors create a couple of hilarious scenes with Gainsbourg and her coworkers futilely attempting to bridge a communication gap with their clients. Continuously going back to this locale–adding a party sequence that’s one of the film’s best–could easily have fallen prey to being nothing more than a joke and yet each time adds something to Alice’s depth. Because she isn’t just a love interest or catalyst for Samba; she’s an equal partner throughout in positive progression and human failings.

Add Higelin’s desire to be more than a badly-paid intern with Rahim’s gradually revealed secrets–heck, even Samba’s uncle wishes he could buy a home on the lake rather than living the life he is–and you begin to see the universality of their plight. We’ve all felt as though we didn’t belong and tried to be someone we weren’t to fit in. While most of us know this feeling in Alice’s context, however, there are more than you’d think who understand exactly what Samba’s experiencing. He has to literally change his identity every time something goes awry or else he cannot work and send money to his family in Senegal. He has so much riding on his ability to stay in Paris that the pressure can’t help but lead to involuntary self-sabotage. After all, no one is perfect. So in comes a sub-plot concerning a fellow potential deportee searching for the girl he was to marry two years previously always lingering in the background. Nakache and Toledano expertly bring us back to him so we never forget the reckoning in store for Samba and yet we’re never beat over the head. They know we understand he wouldn’t have been introduced without reason and choose not to push our patience as a result. Yes, he’s a glorified pawn–and to a point so are a few others–but he’s fleshed out enough for us to truly care about him as a human being. This is crucial too because we need to abhor what Samba does to their friendship even though we’re meant to sympathize with the titular star on everything else. He’s a complicated figure who doesn’t even fully understand himself so we shouldn’t completely give in to him either.

The fact that we don’t is a testament to the filmmakers because Sy’s charisma is a tough thing to ignore. If Intouchables made him into a bona fide star, Samba cements the claim. We watch him take control of so many scenes with an invigorating presence and then on a dime he’s a shy young man always saying the wrong thing to Gainsbourg who herself is visually arresting in quiet uncertainty. Rahir steals some scenes from both with his unstoppable confidence and penchant for making a fool of himself, but his over-the-top antics ensure he never replaces the leads from holding our full attention. Because even though the ending feels a little rushed with a series of events that may be too much for some, I was enraptured by their authenticity through it all. Nakache and Toledano have another crowd-pleaser with international appeal on their hands.

Samba premiered at TIFF and opens on July 24th. See our complete coverage below.