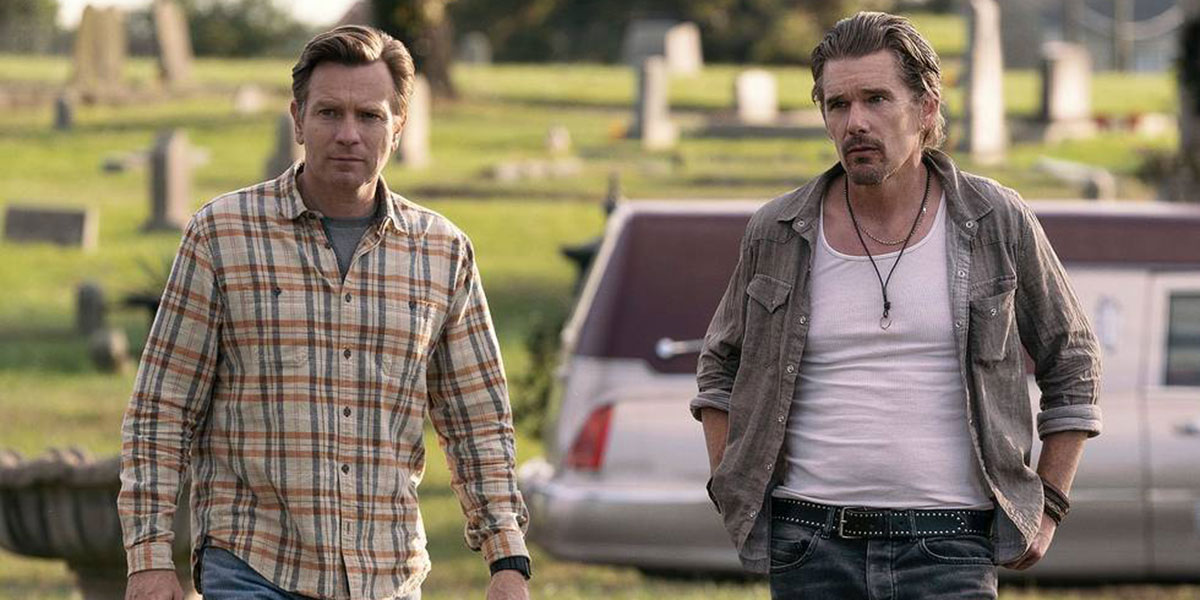 There are types all over Rodrigo García’s Raymond & Ray. There’s Raymond (Ewan McGregor), the more stuck-up type who only wears business-casual. There’s Raymond’s half brother Ray (Ethan Hawke), the relaxed, too-cool-for-school guy exuding the energy of someone who always leaves their shirts unbuttoned. And there’s their abusive father, whose recent death brings the duo together in order to attend the funeral. He’s the type of shitty dad we’ve seen before in movies—except here his spirit looms over everyone in the ways he impacted each character’s lives, for better or worse. The opening minutes, where Raymond convinces Ray to go on a road trip to the funeral home, lays out all the necessary exposition for the all-too-familiar story of siblings learning to live their own lives, with plenty of drama and laughs along the way.

Garcia, who specializes in character dramas like HBO’s In Treatment or Mother and Child, resorts to broad, almost cartoonish developments that render most of Raymond and Ray as a bland dramedy. Upon arriving at the funeral home they’re told by their father’s lawyer that the will states they must dig the grave (a supposed religious requirement, part of a running joke that their dad would dabble in multiple faiths during his life). They meet Lucia (Maribel Verdu), their father’s landlord and former lover—the carefree type that catches Raymond’s eye. Then Ray finds himself drawn to Kiera (Sophie Okonedo), a hospital nurse who doesn’t fall for Ray’s laid back schtick at first. Somehow all these people converge at the gravesite, where the two brothers dig while people talk, cry, fight, and at one point do acrobatics once circus performing twins show up (two surprise half-brothers from a prior fling). Maybe the specificity is meant to reflect how strange life can be. It all comes across as a bunch of contrived quirks within a tired structure.

Mostly everyone phones it in, with McGregor as the worst offender in how broad he plays Raymond. Hawke does fine for a role he can pull off in his sleep. While the presence of actors like Verdu and Okonedo is welcome, it’s only the latter who successfully balances the screenplay’s grounded elements with Garcia’s inclination to go for an easy laugh or shallow emotional beat. There are some decent ideas thrown around, e.g. how Raymond and Ray have a hard time surrounding themselves with people who saw an entirely different person in their father, or their realization that their upbringing was more or less a learning experience for their dad to become a better person for others. It’s unfortunate that they’re drowned out by a need to go bigger than the story needs to, like introducing an unnecessary Chekhov’s gun or giving laugh lines to a precocious kid, all of which bears desperation to evoke the cinematic equivalent of adult contemporary music.

Raymond & Ray, while far from terrible, is more damning for how content it is with mediocrity. We know Garcia and his cast are capable of much better—they’ve done it. When all’s said and done: why bother?

Raymond & Ray premiered at the Toronto International Film Festival and arrives on Apple TV+ on October 21.