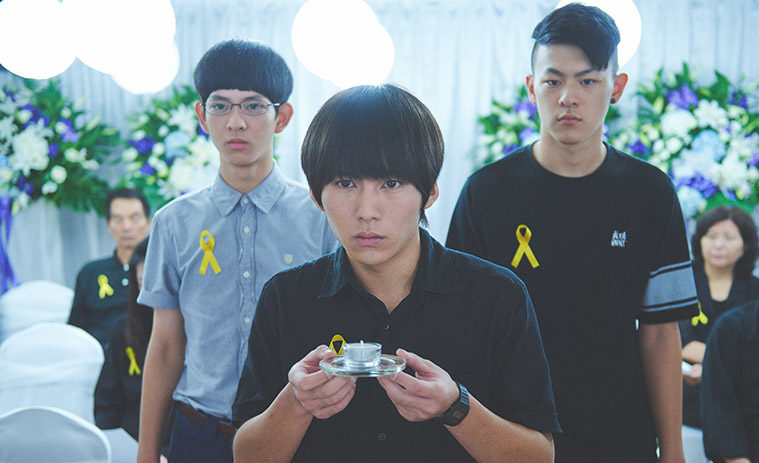 In 2012, Taiwanese documentary filmmaker Chang Jung-chi made his narrative feature debut with Touch of Light. The first time effort paid off, as the drama, which stars blind pianist Huang Yu-siang, was chosen as the country’s submission to the 85th Academy Awards. Two years later, Chang presents his follow-up film, Partners In Crime, an angsty mystery thriller shouldered by a trio of adept young actors. The plot follows three teens, the bullied Huang, the bookish Lin, and the bad boy Yeh, who, while on their way to school, discover the body of a young girl in an alley. After reporting their discovery to the police, they find out that the victim, who allegedly committed suicide, is an introverted classmate named Hsia. Soon the boys bond over her mysterious death and background, which leads Huang to insist that she was driven to kill herself by a cruel student named Chu. They decide to prank Chu in Hsia’s honor, but when the act results in Huang’s accidental drowning, Lin runs, leaving Yeh to take the blame for the his friend’s death. As Lin stews in guilt, Yeh sets out to prove his innocence, only to uncover Huang’s heartbreaking secret.

Surrounded by unsympathetic adults – including a school counselor who pointedly tells them that there is no life after death – the boys are left to figure out the tragedy on their own, which results in seemingly detached curiosity. The question “I wonder what kind of girl she was?” leads to theories that Hsia was a poor little rich girl, a reclusive smoker, and a thief, yet their interpretations say more about themselves than the object of their obsession. At first, their snooping serves as an excuse to partake in some harmless shenanigans, including breaking into Hsia’s empty apartment, but small moments reveal more complicated motives. “She was our best friend,” Huang tells Hsia’s oft absent mother, revealing his desperate need for connection. As Huang singlehandedly digs up clues, each one stringing his eager friends further along, it soon becomes clear what’s really going on, which leaves very little to chew on. Despite its premise, the film becomes a quiet, sensitive exploration of lonely adolescence and the pain of anonymity, especially in an age where everyone lives online. The setting adds an extra meaningful visual element, as the boys’ high school, which is enveloped in a lush landscape, appears jungle-like and wild, a place where surviving is more important than receiving an education. Chang also films his characters in narrow hallways, stairwells, and small rooms, a technique that communicates the claustrophobic feeling of entrapment and yearning for escape.

However, for all its detective work and dead kids, Partners isn’t much of a mystery or a thriller, nor does it strive to provide any truthful discussion about teen suicide, preferring instead to indulge in sentimental, poetic imagery and shots that linger on Hsia’s beautiful corpse. Tidy and predictable, the film delivers few surprises, but makes for a somewhat attractive, if mediocre, drama about lives and relationships ended too soon.

Partners In Crime screened at TIFF. See our complete coverage below and the trailer above.