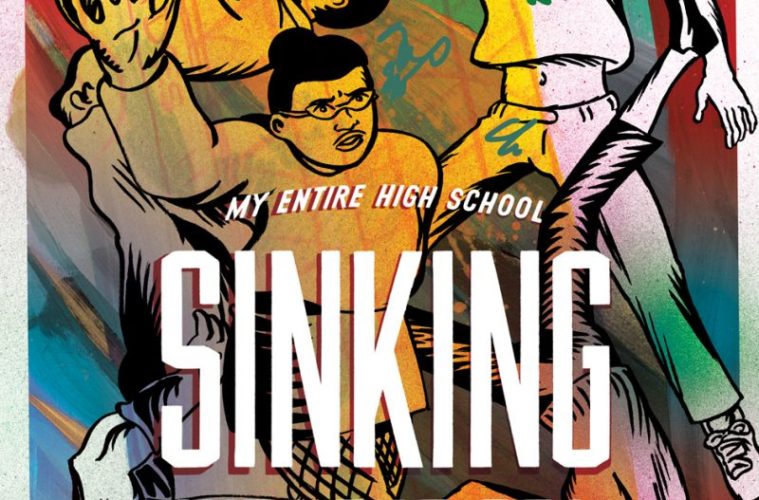 [TIFF Review] My Entire High School Sinking Into the Sea

Who amongst us has not wished for something like a snow day or a power outage that would get us out of school or work? As the title suggests, in My Entire High School Sinking Into the Sea, it’s the hard-hitting high school student journalists’ good fortunate that an entire high school sinks while they’re on the beat. Dash and Assaf (the voices of Jason Schwartzman and Reggie Watts, respectively) seek to expose their principal’s misdeeds as Tides High School has been built on a cliff, under a fault-line, and has just opened a new auditorium on the top of its senior floor. Not since Wayside School have civic engineers and architects have greater failed the American Education System.

Writer/director Dash Shaw’s hand-drawn picture is fun and slight without overstaying its welcome. It never runs out of energy and is constantly in a state of innovation and surprise, parodying pop culture references as vast as Deep Blue Sea and Peanuts. As Dash and Assaf save the day with the help of Lunch Lady Lorraine (Susan Sarandon), she’s made it her life’s work to keep the kids of Tide School Safe after losing her husband, a sea captain, not to a shipwreck but to food poisoning.

When Dash and Assaf’s teen-Woodward and Bernstein duo is broken up by their editor (Maya Rudolph), Dash goes rouge, finding a forged building inspection document that proves the school, on a fault-line, is not up to California code. The unthinkable shortly happens, right on cue, and soon the school finds itself adrift at sea.

Coming from graphic novelist Shaw (Bottomless Belly Button and New School) with the help of a small team, the film has a hand-sketched look that fittingly appears to be crafted with the tools of an elementary school art class, from crayons to watercolors, eventually employing some computer-generated psychedelic imagery as the journey continues. The figures aren’t much more evolved than stick figures set against a tapestry of rich texture.

Shaw succeeds because his proxy — also named Dash — and pal Assaf remain true to their spirit. One could only hope for a little more time with them before the first act plunges them literally into the ocean. The first act’s bus-ride to Tide High School offers funny one-lines while its eye-popping visuals, drawn over the course of six years, and a few unexpected turns in the narrative add up to a film that may become an anthem for alienated angsty teens everywhere. Thankfully, it’s not too smart for the room with its literary references. Rather, it’s about as intelligent as the smartest teens you’ll encounter, finding their way through the misery (and sometimes joy) of a suburban high school, and in that humor and warmth it works.

My Entire High School Sinking Into the Sea premiered at the Toronto International Film Festival and opens on April 14.