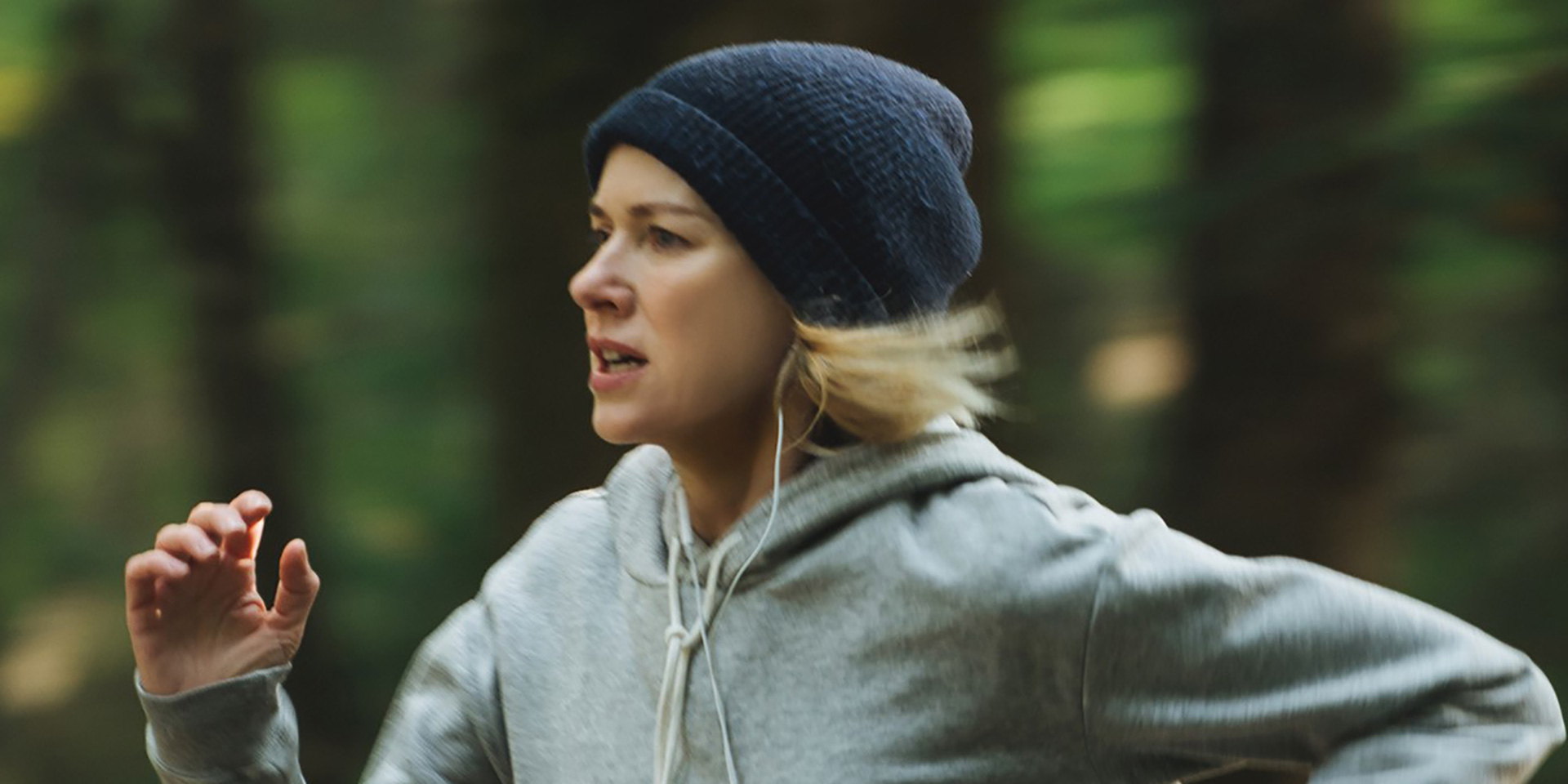 Screenwriter Chris Sparling takes us back to the script that put him on the Hollywood map with Lakewood. Much like his isolated one-man show Buried, it focuses on a single character caught in a high-pressure situation seemingly offering no way out. Unlike it, however, the real danger is far offscreen. Because Amy Carr (Naomi Watts) is safe. She woke up, texted work that she’d be taking a personal day, told the kids to go to school, and set off on a morning run through the forest trails outside her home. Besides a slew of phone calls asking for favors—and a health check, considering the one-year anniversary of her husband’s death is in two days—she’s actually enjoying the peace and quiet.

Phillip Noyce gives us a good idea of what the forthcoming drama will entail by having police cars fly by on the road. They’re speeding back towards where she came as the constant calls distract her from what they might mean. It’s only when her phone’s government-alert signal blares that she springs to action—it appears the chaos surrounds an active shooter scenario at one of the local schools. She calls the elementary first, since she knows her daughter is there. They say everyone is safe—that the incident is at the high school instead. Amy sighs in relief because Noah (Colton Gobbo) ignored her request that morning. He should still be in bed at home. Except he’s not.

While solid as a premise for building dread and suspense, executing it as a fully fledged feature is another story. I get the appeal, though. Especially amidst the COVID pandemic. Here’s a script that only has one principal actor with whom you can go into the Ontario woods and shoot without risking too much alongside a small, masked crew. Add the parental aspect—Noyce says the material dredged up many fears he’s had in the past—and there’s a decent character-study opportunity to capture the helplessness inherent in that role. 99 times out of 100, waiting becomes this situation’s terror. That Amy is caught miles deep without a car increases it—she’s also miles from updated information.

Watching her struggle to keep her head on straight just to find out if Noah even went to school—he said he wasn’t, despite a neighbor seeing him get in his truck, though that could mean he went somewhere else—proves effective because Watts is a compelling performer. There’s the out-of-breath nature of having jogged and now wanting to run. There’s the inevitable “spill” and injury to ensure that the hour her phone’s GPS said it would take to get on-scene increases exponentially. And don’t forget spotty service, depleting batteries, and the diverting traffic to turn a 5-minute Lyft pick-up into 40. Amy is desperate enough to call the auto shop across the street from Noah’s school and ask them to check the parking lot for his truck.

All this happens while periodically ringing a 911 operator who is kind enough to let her ask for her by name for continuity of crisis management. That a detective eventually gets on the line to ask personal questions, however, makes things worse. Not only must Amy worry about her son’s wellbeing as a victim, but she’s also now got it in her head that the police believe he might be the shooter. The stakes keep rising, yet she remains safe. What could she even do if she finally gets to the community center? Wait some more? If Noah does prove the killer, the police could always patch her in to try talking him down. Emotionally compelling or not, Watts is rendered intellectually inert.

Everything that makes Lakewood stressful is exposed as manufactured; there’s no way to hide it. Once Amy reaches the pinnacle of exasperation and fear, the only outcome left is to plateau. Sparling knows he can’t afford that, though. And rather than let the realization tell him this exercise should probably remain in the classroom or, at best, a short film, he concocts a way out. He starts playing with the character’s occupation and connections to better position her as someone whose stress level might compel an acquaintance to commit a felony. It’s one thing to ask us to ignore the script’s exploitation of grief to shock us by accusing Noah; it’s another to embrace a convenient rabbit-hole descent towards contrived, one-sided action.

That’s all this is. How far will Amy go? As far as her contact list takes her. Could that feasibly turn her into a hero? Sure. There’s still that last 1-in-100 chance to render her the perfectly placed private citizen able to leverage good will and favors (without explanation) to get the job done. So is the message that good Samaritans are all around us? Not everyone’s a saint. Amy’s friend Heather justifiably refuses to pick her up because she’s worried about her own daughter. Does that make her less of a human being for doing what she could for her family? It shouldn’t. So while Noyce and Watts try their best to ramp up tension, Sparling’s foundation proves too flimsy to comply.