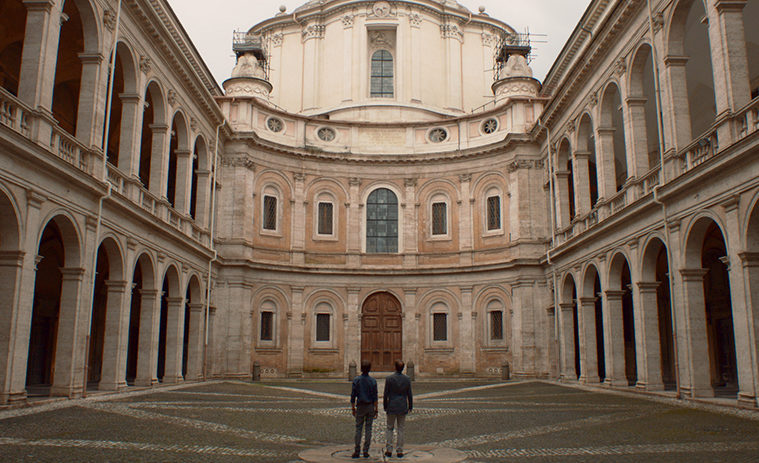 La Sapienza opens with a montage of Italy’s greatest architectural wonders — cathedrals, domes, churches, and more shot in perfect lighting, propelled to grandiosity by the backing sounds of an operatic choir. It is a gorgeous five minutes that seems to build a sense of artistic appreciation in the viewer through sheer rhythm. That makes it all the more shocking when, after the brief interruption of an epigraph, the film resumes with a shot of an ugly corporate skyscraper. “Life’s good,” the sign boasts.

Eugéne Green, the 67-year-old American-born filmmaker, is waking from a dormancy of five years with La Sapienza, so it’s appropriate that this startling architectural juxtaposition feels like a wake-up call. Green is more than capable of deploying these precisely when he needs to, for he establishes a distinct editing pattern early, one nonetheless broken rather liberally. Following a handful of establishing shots, conversations take place in an immaculate shot-reverse-shot fashion, each line originating from the on-screen figure without exception, who looks directly into the camera. As tension mounts or the conversation grows more intimate, the close-ups will cut a little bit quicker, as if ceding the reverberations of the last few syllables that follow the end of a sentence, and the camera gets a little closer, leaving less and less headroom. As a viewer, the effect is hypnotizing, all but forcing one to search for motives and other character intricacies: it appears that these people are looking you directly in the eyes, and breaking eye contact is difficult, although a flustered or uncertain character will occasionally grant you mercy by turning away for just a moment. It’s a brilliant way to bring these characters to life. Who is giving and receiving these looks? First, there’s Alexandre Schmidt (Fabrizio Rongione), a renowned architect whose opportunities are being dwindled by an increasingly corporatized, bottom-line environment. Soon thereafter, we meet his wife, Aliénor (Christelle Prot), a behavioral psychologist/sociologist facing her own professional woes. He decides to take a vacation to study Francesco Borromini, and she decides to come along. “Fine,” he says. When they hardly speak to one another, we can infer that their marriage has seen better days, although it could almost certainly be worse, too.

At their first stop, they meet Goffredo (Ludovico Succio) and Lavinia (Arianna Nastro), he an aspiring architect getting ready to go to school in Venice, she his sister, perpetually ill, perhaps because of her attachment to him. Aliénor takes a liking to the pair, with Green’s close-ups conveying a kindred spirit in Lavinia and her decision to invite Goffredo to dinner, hoping he will have lots to talk about with Alexandre. The tense meal sees them literally unable to meet eye-to-eye, but Aliénor nevertheless announces her plan to take care of Lavinia and pay for Goffredo’s accompanying Alexandre on his research. Their first couple of conversations are awkward, obviously, with Alexandre refusing to even look in Goffredo’s direction as he addresses him and the two exchanging words in a single, unbroken shot — quite anomalous for this film. Soon enough, however, they lock eyes, and teacher-student relations complicate.

To disclose precisely what they talk about (besides architecture, which Green shoots with patient, attentive, and reverent eyes) would ruin the film’s surprises, but the film splits into two separate stories, that of Goffredo and Alexandre and that of Aliénor and Lavinia. In one of Green’s bolder formalistic moves, he opts to let the two stories play out with minimal cross-cutting and refuses to underline connections. Nonetheless, it becomes clear that their themes are not similar, but rather complementary. The older couple learns from the younger, sure, but the lessons are quite distinct and Green’s motifs — light and people, metaphorical or real — are a bit overexposed in dialogue. Nevertheless, much of the takeaway is from how people talk to one another and look both at each other and objects of interest, namely architecture. Similarly, La Sapienza contains an unexpected digression or two that explicates the relationship between Alexandre and his idol, Gian Lorenzo Bernini, deepening the film’s scope and also emphasizing its intergenerational discourse, which suggests that we are all students, both of those who came before and those who have/will come after us. All of this is suggested in a key scene, wherein Aliénor talks with a refugee Chaldean-descendant about his life and in which he offers her reassuring words. The moment, while difficult and unusual, comes off as delicate and profound because Green’s actors deliver even when they have to stare straight into the camera. It also packs an emotional punch, which quietly but unmistakably sneaks into the film as a whole near the end.

The only thing that does not fully work, ironically, is a use of architecture. The film seems to take for granted that the architectural feats it shows are interesting, even life-affirming; the former is true — on a personal note, my knowledge and interest in architecture is pretty much nil, yet the film’s presentation of interiors and exteriors (as well as its choreography of light and movement) make the subject fascinating — though the latter is not. For its characters, certainly, and probably for Green as well, but the film is not interested in stretching (what may be) its thesis beyond the trite “experiences with art can rejuvenate our lives.” We have heard that one many times, and while this is not a bad telling of such a story, it is not an especially memorable one. Thankfully, La Sapienza has plenty else going on to keep both eye and mind occupied.

La Sapienza screened at TIFF and will be released by Kino Lorber. See our complete coverage below.