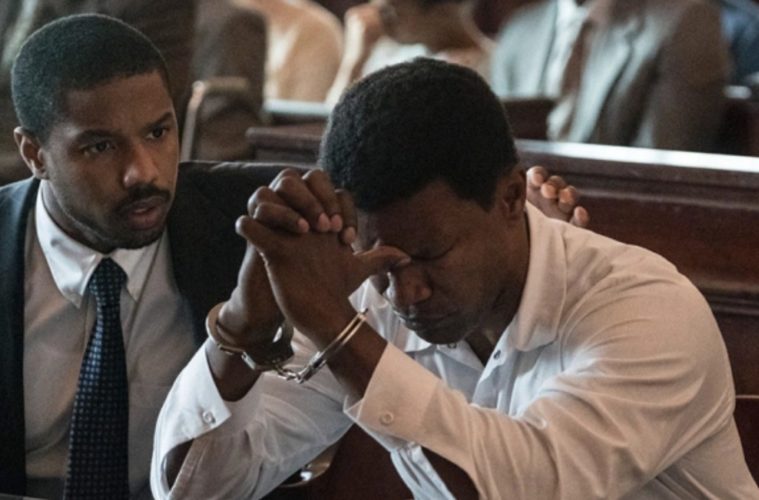 It is impossible to walk away from Just Mercy unmoved. This is a film in which the horrors of injustice are rampant, and deeply rooted racism is seemingly everywhere. There are real heroes onscreen, and real villains. Knowing that this death row drama is based on a true story makes the film even more powerful. Yet Destin Daniel Cretton’s third feature also feels a bit predictable, a bit obvious, and never quite as compelling as one might expect. That the film can still be deemed a success is a testament to its actors–specifically Michael B. Jordan, Jamie Foxx, and Brie Larson–and its tremendously talented director.

The Short Term 12 and Glass Castle helmer co-authored the screenplay with Andrew Lanham, and this is where the film’s few issues lie. Just Mercy is based on a book by the film’s protagonist, Bryan Stevenson. He is a Harvard-educated lawyer on an idealistic and much-needed quest to offer legal assistance to inmates on death row. Many of these individuals received poor or even incompetent legal representation, and whether guilty or innocent, Stevenson has an innate understanding of the human rights at hand. They deserve fairness, and his goal is to help them finally receive that fairness.

The screenplay by Cretton and Lanham tells the tale of Stevenson and the Equal Justice Initiative he founded with efficiency; there is a lot of ground to cover in its 136 minutes. But this speed dulls some of the emotional impact and causes Just Mercy to often feel like a rehash of death row dramas we’ve seen many times before. What makes this particular story worth telling, though, is its time, its place, and its end results. It is no spoiler to say that Stevenson saved lives worth saving, and that his research and dogged efforts have impacted generations to come.

Who better to portray a young man with such deep conviction than Michael B. Jordan? The Creed and Black Panther star is an electric performer, one who is built to deliver stirring courtroom proclamations. This is perfect casting, and Jordan excels. A Harvard grad like Stevenson could have easily gone a different legal industry route, but he went to Alabama in late 1980 to start his fledgling office, and as portrayed by Jordan, his path was unwavering. His employee, a young mother named Eva Ansley (Larson), also has the same sense of right and wrong.

Stevenson takes on a number of death row cases, but one stands out. Walter McMillan was convicted of the brutal murder of an 18-year-old. But the case was full of holes–spotty testimony, no physical evidence–and Stevenson becomes convinced that an innocent man is set to die. As played by Foxx, McMillan is wounded but eloquent, a man who has no hope in the system. McMillan’s family shares his sense of hopelessness; they’ve been down this path before with other attorneys. Stevenson, however, is different. And even though he is being pressured from every direction to drop the case, he soldiers through.

Just Mercy is anchored by Jordan and Foxx, whose scenes together are both somber and energized. Yet as strong as Jordan is, Stevenson comes off as almost too perfect. The Bryan Stevenson we seen on screen is, quite simply, a hero without a single character flaw. This is a protagonist to cheer for, but not one who–as written–feels wholly authentic. And it makes the repeated courtroom scenes featuring Jordan speaking to the judge and assembled crowd start to feel a bit too Hollywood.

Just Mercy is a film to respect, to be moved by, and one that may even inspire some viewers to look closer at the death penalty issue. (Statistics showing the number of inmates given the death penalty who were later proved to be innocent are downright astounding.) Being based on a true story means there is not much wriggle room, plot-wise. That is understandable, but knowing that does not mean the story avoids predictability. Even with its flaws, Just Mercy is an engaging experience, and it is further evidence of Michael B. Jordan’s excellence. It’s a solid big studio effort with adult appeal, and that’s something worth applauding.