TIFF Review: ‘Jallikattu’ is a Visceral Journey that Builds to an Exhilarating, Brutal Climax 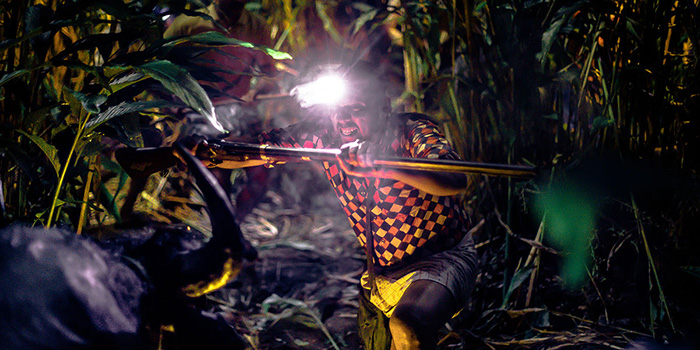 The day breaks and the rhythm of a community sparks with music, breathing, and rote action that keeps everyone in a familiar balance. They visit Varney the butcher (Chemban Vinod Jose), accept their pound of red flesh, and head to church. Everyone is happy. Everyone is at peace. Plans for a wedding unfold and the town is abuzz with idle chatter and a wealth of gossip before the evening brings unexpected disaster. From the staccato pounding and ringing of sound to the burning of fire amongst a chaotic nightmare, Varney’s latest bull has escaped. It runs through the thoroughfare trailing destruction behind it with cracks and bangs that bring out angrier and angrier victims looking for someone to blame. Whether for beast or man, the hunt has commenced. While the word Jallikattu is defined as a spectacle wherein people attempt to grab a bull’s hump after it’s been released into a crowd of people, the animal at the center of writer/director Lijo Jose Pellissery’s film wasn’t let loose intentionally. This jallikattu isn’t sanctioned and those tasked to bring the beast down are in no way shape or form happy. This is a grave inconvenience that risks bringing the worst out of these testosterone-fueled men re-tying the clothes around their waists, grabbing their guns, and setting off with fiery hearts if not strong constitutions. Would they rather murder Varney and his friend Antony (Antony Varghese) instead? You bet. But cooler heads say they’re necessary to the community. Benefit of the doubt remains–for now.

That doesn’t mean external forces won’t enter the fray. Some are uninvited opportunists ready to kill the bull and steal its meat for themselves while others are brought in at the behest of the people. Kuttachan (Sabumon Abdusamad) is of the latter group—a man whose reputation has his name chanted upon his arrival. Varney asks for his help despite protests from Antony stemming from a checkered history shared between them. Suddenly the overarching tensions born after this monster was accidentally unleashed shift towards personal vendetta. The father of the bride is accosted and abused, Antony’s sister is constantly labeled as a whore, and the local medicinal farmer is all but ignored when asking about restitution for his trampled crops. Violence and aggression starts bleeding into everyday life.

This fact becomes the propulsive force pushing things forward as the uniquely gorgeous, kinetically musical opening of harmonious cooperation is forever shattered. The sun goes down and patience is frayed as guttural screams and bloodlust takes over the bodies of these men who originally set out to save their neighbors from hardship and now crave destruction of their own design. Nothing is therefore subtle about Pellissery’s decision to devolve the characters he’s put on-screen into wild animals standing on two legs. It doesn’t require a chilling epilogue to realize this fact either since actions continue growing more and more provocative with every near miss of capturing the bull. This civilization is merely mankind playing dress-up to falsify evolutionary progress while the truth of its feral savagery bubbles beneath.

Even so, nothing can prepare you for where Pellissery leads us. While the middle portion of the film is hardly boring, it can grow a bit tiresome as attempts to confront the animal are met with failure. What we only realize in hindsight is that the malice born from those mistakes festers and builds until decorum is thrown completely out the window. First it’s verbal barbs lobbed back and forth before shoving matches and physical combativeness replaces them. As soon as human blood is spilled by the hand of another human via a knife wound years in the making, though, the floodgates holding back hostility are opened wide. The formal and aesthetic boldness of the beginning is thus mirrored at the end with an unforgettably audacious display of untamed carnage. Will anything that happened between those bookends remain at the front of your consciousness upon leaving the theater? Probably not. The sheer visceral impressiveness of what Pellissery provides with them will, however, render this fact meaningless. The start and finish are absolutely exhilarating in their expressive melody and chaos respectively. From authentic drama to suspense thriller to full bore horror, this sensory crescendo will have you staring wide-eyed at the screen once the orgiastic rampage takes hold to burn civility to the ground—if any was even left. I’m talking mother! levels of mind-melting brutality wherein the climax has absolutely no interest in letting you catch your breath. This is who we are: vicious, cruel, and selfish enough to slit our brother’s throat on impulse alone.