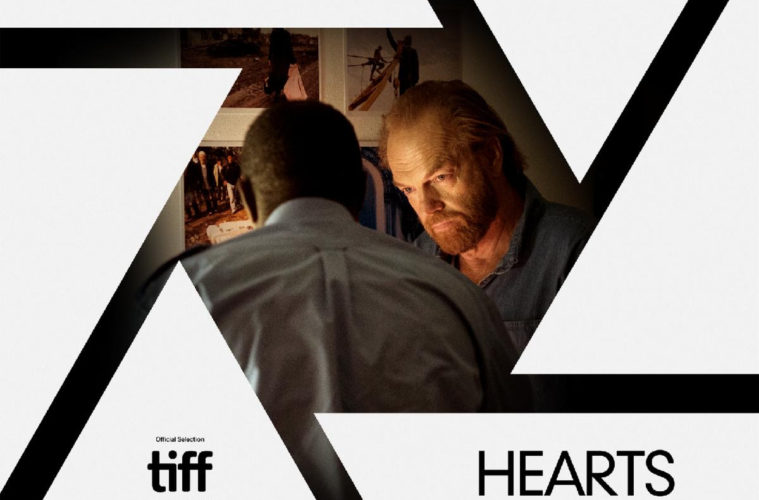 TIFF Review: ‘Hearts and Bones’ Shows the Battle Raging Inside Survivors of War

After witnessing famed Australian war photographer Daniel Fisher (Hugo Weaving) endure a traumatic experience in Iran during the opening of Ben Lawrence’s Hearts and Bones, the sudden shift to a taxi driver (Andrew Luri’s Sebastian Ahmed) will seem abrupt. It’s not, however, a coincidence that the latter recognizes the former’s name on the radio since they have a shared history courtesy of a small Sudanese village. Dan was on assignment during a massacre fifteen years ago that claimed the lives of Sebastian’s family. One documented the nightmare to guarantee the world couldn’t ignore this atrocity while the other subsequently spent years trying to forget it. What should Dan do when the refugee asks him to exclude those sensitive, personal images from his new exhibit? Where do truth and decency diverge?

It’s a complex subject spanning the artistic merits of non-fiction work to the human cost documented within. Lawrence and co-writer Beatrix Christian take pains to therefore mirror the post-traumatic stress afflicting both men as survivors of war and perhaps accomplices to it. With that similarity also arrives a very important distinction, though. Where Sebastian had the horror of what occurred brought to him, Dan chose to be included. One was a victim and the other a risk-taker—the value of what the camera captured forming a chasm between them. Because what does a photograph really display? Are those people or subjects? Are they taken as memorial or exploitation? Do they help combat future crimes or simply distract the photographer from personal grief rendered less important by comparison? This is the battle waging inside Dan upon returning home to discover the public is dismissing his work as “misery porn” and his partner (Hayley McElhinney’s Josie Avril) is pregnant despite tragedy already befalling their family to make that blessing a potential repeat of still-raw suffering. He’s been scarred physically and psychologically to the point of panic attacks and hospital stays, but he refuses to burden her with the details of why. He can’t share that pain when they already have enough shared pain away from his work to fight through. Sebastian is thus a godsend in some ways. Not only can he relate to a specific hurt, but he too keeps his past a secret from his wife Anishka (Bolude Watson). They can support each other.

They might even save each other from the noise that haunts them once Sebastian realizes the photos depicting his past can be catharsis. He sings in a choir that doubles as a therapy group with other refugees, but going back and seeing the actual faces and place can provide a clarity talking cannot. Suddenly this work Dan had begun believing was worthless in the grand scheme of things (wars still wage on everywhere) found a purpose. To bring his new friend closure, it could have all been worth it. And to see that healing first-hand means he can have it too if he lefts himself confront his own demons via all the things reminding him of his deceased child that are locked away at home and in his mind. Lawrence and Christian have placed us on the precipice of understanding as past and present collide to create salvation or destruction depending on how far these men go to admit the difficult truths they’ve hidden for so long. While the film has some heartfelt exchanges of kinship and empathy, however, it is also punctuated by moments of abject despair. This is crucial to a core message that moves beyond the healing power of art towards the entitlement those who make it possess and those who serve as their subjects don’t. While nobody involved lies besides through omission, Dan and Josie are very clearly guilty of wielding their white privilege to accuse before listening. So deluded by the importance of his work, they forget the pain captured is real.

It leads to some brilliant exchanges that pit Dan against Sebastian and Josie against Anishka at a time when each pair is more alike than ever before. The ease at which the Australians can project their agony onto others who themselves are already visibly dealing with their own is abhorrent and yet completely authentic. The film does risk falling into the trap of intentionally using POC suffering as a means of opening the eyes of the white people it wants the audience to care about more, but I think there’s just enough nuance to get away with it thanks to Luri and Watson’s memorable performances. Their characters provoke a necessary change in Dan and Josie, but they also have the room to spark one in themselves. Are Sebastian and Anishka on equal narrative footing as the other couple? No. But we do get the opportunity to know them and care about how the darker secrets yet to be uncovered will affect who they are right now. Dan and Josie’s loss conversely doesn’t compare to Sebastian’s, but it does help bridge the emotional gap towards acknowledging how perception is only half the truth. What we see demands context and we can often become complacent about learning what that is. A boy holding a gun to another boy’s head doesn’t absolve the latter of his own heinous crimes. And Dan can’t say Josie accepting the chance her pregnancy could kill her without his input is selfish when he plays with death without hers every single assignment.

Hearts and Bones is full of these parallels and each impacts the bubbling tensions these men have been desperate to avoid. Sebastian is by far the more captivating subject, but Daniel is the lead and thus afforded time to really unravel. While a lot of that is Weaving owning the role and its stubborn ego of toxic masculine stoicism, one could argue race and circumstances are a factor too. Sebastian’s existence isn’t conducive to nervous breakdowns or tantrums when a single setback is literally life or death. Dan can get on a plane, cancel an exhibit, and receive second chance upon second chance in his personal and professional lives. The blood on their hands haunts both, but only one gets blamed while the other is consoled.

Hearts and Bones screened at the Toronto International Film Festival.