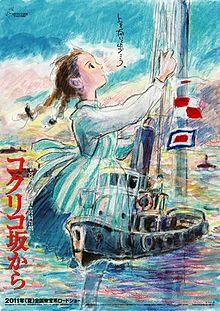 [TIFF Review] From Up on Poppy Hill The Japanese animation studio, Studio Ghibli (behind such Oscar winners as Spirited Away and My Neighbor Totoro), is known for its whimsical characters and complex themes, such as the relationship between humans and death, which both adults and children can glean from. Adapted from a manga written by Tetsuo Sayama and Chizuru Takahashi, From Up on Poppy Hill strays from the characteristics of their productions by losing the unconventional settings and characters in this melodrama. This is a story of the preservation of Japanese history and human relationships. Gorō Miyazaki, son of Hayao Miyazaki, the screenwriter of From Up on Poppy Hill and co-founder of Studio Ghibli, directed this film.

Umi (Masami Nagasawa) is a high school girl who is spirited and headstrong. She raises signal flags to honor her father, a captain, who died in the Korean War. She lives at a lodging house with her sister and a few other women, and she waits for her mother to come back from America. She meets Shun (Junichi Okada), a popular student, at a spontaneous student rally opposing the demolition of the clubhouse, an old, dirty building that holds several clubs and organizations such as the Latin Quarter, the school newspaper. Shun is passionate about the newspaper and the protection of the building. Umi and Shun take charge to clean up the clubhouse and appease the head of the school. They begin to have stronger feelings for each other, but their parents’ curious past interferes with their love. They suggest breaking a certain taboo, which may throw the audience off. This film takes place just before the Tokyo Summer Olympics of 1964, a period of revitalization and change. The goal was to alter the world’s attitude of Japan since World War II. Old buildings are demolished to make way for the new and the spectacular.  The Clubhouse in the film is a magnificent building that holds several niches of different interests. To Shun and to the supporters of the building, this clubhouse signifies the memory of Japan. Shun and Umi believes their connection to the past and family is ambiguous, and desire a concrete answer to their identities.

Studio Ghibli has a clean record of creating beautiful animations. The delicate scenes of landscapes and backgrounds from From Up on Poppy Hill are lovely. Although it does not have the wow-factor such as other Studio Ghibli’s films of fantasy and magic, From Up On Poppy Hill is a thoughtful and reserved film with steady pacing.