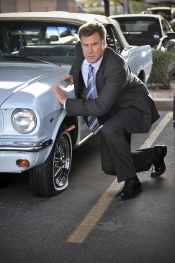 [TIFF Review] Everything Must Go From one of the hottest scripts in Hollywood, Dan Rush‘s Everything Must Go, recently premiered here at TIFF. Based on Raymond Carver‘s short story Why Don’t You Dance?, the film follows Nick Porter (Will Ferrell). He is an alcoholic who has lost his job, wife and home. After his wife put all of Nick’s belongings on their front lawn, he has five days to get rid of them.

The film is filled with rich visual storytelling. Whether it is Porter’s bike falling over or recycle bings getting crushed as he tries to jump the fence to get into his house, these little moments add a wealth of life to his character

Ferrell’s dramatic performance delivers as an aimless man who has nothing left. He has subtle comedic moments, but there are no over-the-top monologues or ridiculous phrases found in his normal McKay affairs.

Rebecca Hall, who plays his neighbor, gives another fantastically layered performance. Some of the best interactions come from the two opening up about their own lives.

Hindering the film, the tone is very one-note and Rush never pushes the boundaries to create a truly effective piece of work. While enjoyable, we meander through this safe indie realm from beginning to end.

If Rush had gotten a little more personal with the great script, some raw emotion could have been transferred. Instead, the pain Ferrell is going through stays at the surface and things wrap up in the conventional way one could have guess all along.

The top-notch script is still cinematically captured to great effect and Ferrell further proves he can do more than just comedy here. Under different direction it could have pushed the envelope a little further, but what we go is worth not letting go.