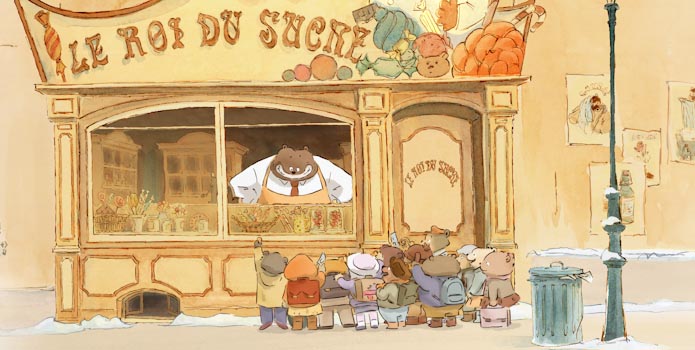 Based on the picture-book series by Gabrielle Vincent, Ernest and Celestine is a simple and sweet film about about a friendship between a mouse and a bear. This traditionally drawn animation has a light pastel color palette and inky fluid lines that are refreshing to watch, and this film stands out from the current dominance of 3-D computer generated films. Directed by Benjamin Renner, Vincent Patar, and Stéphane Aubier, this film, although without a strong plot or deep meanings, is sure to charm anyone of any age, not unlike last year’s Winnie the Pooh. Celestine (Pauline Brunner) is an orphaned mouse who, unlike the other mice, believes that a friendship between a mouse and a bear is possible. The society of mice, who live underground, believes that this idea is preposterous, as bears are established as terrible beings who eat mice. Her peers further disapprove Celestine, as she prefers to create art rather than to intern at the dentist office, which is regarded as a respected career option. As an intern, Celestine is required to collect teeth from bears, who live above ground. Whereas bears are portrayed to appear human, mice, though anthropomorphized, are still treated like mice in this film. These bears are frightened by them and consider mice as vermin.

Ernest (Lambert Wilson) is a rambunctious and hungry bear who lives in quiet country house hidden from the town. He, like Celestine, is an outcast because he has dreams and ideas different from his peers. Ernest and Celestine unexpectedly meet and become best friends through a series of crimes they commit. Their friendship is socially unacceptable, and they become wanted figures by their respective communities. Ernest and Celestine mirror each other in almost every way possible. This could be seen as a flaw, as their characterizations do not make them truly unique. However, much of the humor and delight are derived from their parallel personalities, as well as from visual content and form. For example, there is a lovely scene of visual music; the audience is able to see what Ernest imagines the sound of his music would physically look like. Ernest and Celestine is a graceful 2-D animation film that is able to captivate both children and adults. Although the plot is sacrificed for the development of the relationship between Ernest and Celestine, this painterly film offers senses of wonder and youthfulness.