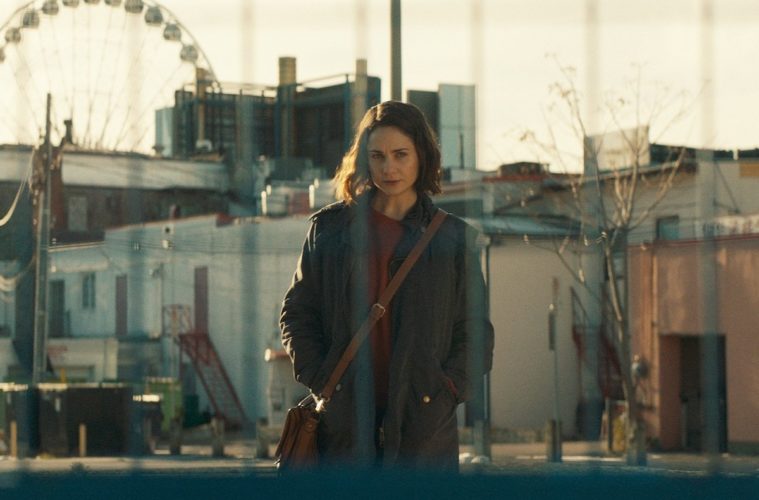 If you’ve grown up on the American side of Niagara Falls, Clifton Hill means two things. The Ontario tourist destination is an enjoyably garish bit of Las Vegas lite–Ferris wheels, wax museums, casinos. And it’s also the must-visit for 19-year-old Americans looking to drink legally. Director Albert Shin’s Clifton Hill is an intriguing cocktail of secrets, lies, run-down motels, flashing lights, and glitzy entertainment with a dark underbelly. In other words, the Hill’s moment in the spotlight is also some rather devastating PR for Niagara Falls upon the film’s world premiere at the Toronto International Film Festival.

It is important to note, however, that Shin’s film is set during the off-season, a chilly stretch of time in which the number of visitors decreases. Most of the locations visited by Abby, deftly played by Tuppence Middleton, are lonely, somber, and cold. Shin sets this tone from the opening scenes. Young Abby is fishing with her family, but in a moment alone comes across an unexpected sight. It’s a dirty, bloodied young boy, one clearly on the run from a grizzled duo who drive by before Abby’s eyes. These are startling sights for a young girl, and once this mysterious sequence ends there is a feeling that Abby will never quite recover.

Indeed, she has not. Abby is returning home following the death of her mother, and, with her sister, must determine what to do with their mother’s aged motel. The Rainbow’s best days are behind it, but its status is a point of contention for the sisters. Abby is unsure about selling it to the Lake family, wealthy local developers who seem to own most of Clifton Hill. Abby’s sister, Laure (Hannah Gross), just wants to move on.

It is during his period in which Abby begins to think back to the bleeding boy in the woods, and what may have happened to him. All signs seem to point to the Lakes, and to husband-and-wife entertainers, the Magnificent Moulins. The couple’s son died by suicide, and Abby becomes convinced the boy she saw was theirs—and that there is likely more to his death than what was reported. The details of his so-called suicide and several other strange details, are explained by Clifton Hill’s most dynamic and engaging character: Walter Bell.

The appearance of Bell is one of the strangest and most memorable entrances in recent cinema. As Abby stares out at the water the boy supposedly jumped into, a scuba diver emerges from the deep. He cheerfully takes off his mask and is revealed to be… the great David Cronenberg, director of The Fly and Dead Ringers, in a rare acting role. His character is a rescue diver and a tad more; “sort of the town historian,” as he puts it. Bell hosts a podcast called “Over the Falls,” and Abby sees an ally. He records in the basement of a delightful establishment called the Flying Saucer Restaurant—where he also works.

Cronenberg’s scenes with Abby are by far the film’s most enigmatic; their encounters are riveting, dryly humorous, and expertly written by Shin and James Schultz. Middleton is every bit Cronenberg’s equal in these scenes, giving a performance that is both wounded and appropriately mysterious. We learn later in the film that Abby is not quite what she seems, and Middleton plays it just right, shifting slowly from tough to fragile. Indeed, the acting is strong across the board. It is the story that counts as a bit of a letdown. This is a standard unsolved mystery drama, the type that would be quite at home on a small-screen police procedural. The setting certainly adds to its interest, but even when the boy’s fate is (seemingly) explained, it is difficult to care. We are enraptured by Abby and Bell, not by the story that brought them into contact with each other.

This is the Ottawa-born Shin’s third feature, following 2010’s Point Traverse and the 2014 TIFF entry In Her Place. With Clifton Hill he has shown an ability to showcase compellingly flawed characters and to capture the feel of a unique area of Niagara Falls. Of all the film’s successes, its greatest is the performance of Cronenberg. This is perhaps not a surprise; the filmmaker is always a charismatic, delightfully obtuse performer. He has been impressive in front of the camera on numerous occasions, specifically in Clive Barker’s Nightbreed and, most memorably, as a hitman in Gus Van Sant’s To Die For. Clifton Hill genuinely leaves us wanting a Walter Bell spinoff. At the very least, then, Hill has given us one of recent Canadian cinema’s most memorable characters, and that’s worth something.

Disappearance at Clifton Hill screened at the Toronto International Film Festival and opens on February 28.