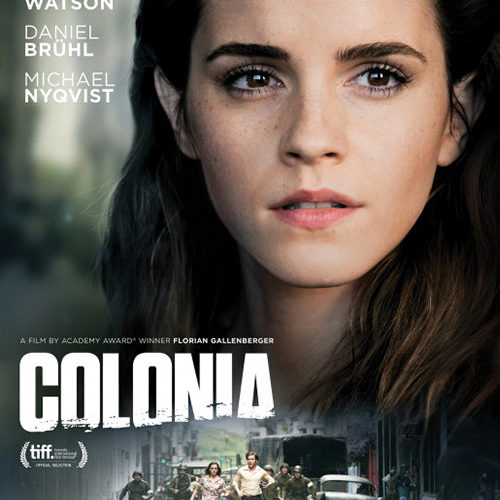 It’s amazing how many horrific acts mankind has initiated over the past century. With all the coups, wars, dictators, etc. it’s impossible to find a country devoid of at least one historically heinous blight. Chile under Augusto Pinochet certainly had its fair share, but I never heard of the prison camp/cult commune Colonia Dignidad. Run by a “godly” savior in Peter Schäfer (Michael Nyqvist), this community guarded by an electrified fence and segregated between men, women, and children became his state-run playground. He took in Dirección de Inteligencia Nacional (DINA)’s tortured and lobotomized, broke up families forced into captivity, and ensured no one could leave. Only five people in forty years ever escaped and we’re to believe Lena (Emma Watson) and Daniel (Daniel Bruhl) are two.

We meet this young couple as they stumble upon each other in Santiago: she a flight attendant with four days off and he a German immigrant turned revolutionary. How they met or how long they’ve been together is unnecessary once we see the love they share for one another. His seeing her in the crowd, stopping what he’s doing, and sifting through protestors for a kiss explains everything. Unfortunately, while the fight to keep Salvador Allende in office appeared to be raging on, its end comes abruptly. Pinochet wrests away control and all sympathizers are rounded up or shot on the spot. Daniel is fingered as the opposition’s poster designer, shoved into an old ambulance, and whisked away before Lena’s eyes.

Everyone knows where he’s being taken yet no one is willing to help. One must be “devout” to join Schäfer’s ranks if not kidnapped by DINA and to enter is to dissolve your freedom. Lena doesn’t care. She will do whatever it takes to retrieve him. A heroic stance and ripe for thrills as we follow hers and Daniel’s harrowing experience under Schäfer’s thumb, it’s perhaps too heroic. It’s difficult to say this considering their plight and the tragic circumstances that led them there, but these two honestly prove the luckiest human beings ever to have lived. For her to be let in, him to survive extreme torture leaving many without brain function, and both to stumble upon an escape is tough to swallow.

I’m not saying it’s impossible, though, since the TIFF crowd I watched alongside erupted in uproarious cheer during two separate instances of good guys prevailing. Watson and Bruhl’s performances are a big part of this because we align ourselves with them fiercely. We want them to survive Schäfer’s lunacy—itself a brilliant, over-the-top bit of villainy from Nyqvist—and the ways they must undermine his rule are suspenseful in their brutal intrigue thanks to Oscar-winning co-writer/director Florian Gallenberger‘s vision. They’re trapped in this prison unaware if the other is also being held captive until days later and their dedication to remaining in the enemy’s good graces goes above and beyond.

Supporting roles like Gisela’s (Richenda Carey) women’s group taskmaster, the other “brainy” woman (Vicky Krieps‘ Ursel) who isn’t blindly giving allegiance to Schäfer, and the many secret police officers who hang on each of their cult leader’s ideas lend an authenticity to this world while also checking off the stereotypical boxes needed for dramatic conflict. After all, you cannot carry out their hopeful quest for liberation without assistance or a few baddies in carefully written positions to be incapacitated and thus render the journey falsely arduous. If only their plan didn’t hinge so much on chance and good fortune—it’s as though the filmmakers are making a point to say how God is on the side of the righteous and not evil abusers.

Colonia ultimately falls prey to a desire for a concrete happy ending in the face of adversity. While the film’s exact conclusion works well in Argo because it’s the goal from the beginning, the airport chase here plays as an afterthought. We invest so much time in the compound and its oppression that turning the emotional drama of love into against-the-clock action feels disingenuous. Especially since not everyone survives the initial fight for freedom. How can we experience what should be extreme sorrow in death and then force ourselves to immediately forget it for empty, pulse-pounding cat-and-mouse? Rushed and full of cinematic artifice, Gallenberger and Torsen Wenzel‘s script reveals itself to be devoid of the naturalism the leads are desperately trying to supply.

Their acting almost makes up for it until that artificial Hollywood finale. It ruined all good will the first act built. Watson’s and Bruhl’s romance taking a backseat to plot hurts immensely because the relationship turns from heartfelt to a reason for two “smart” and stubborn Europeans to be imprisoned together. They try to add nuance with blame games and the continued motif of photographic evidence being the reason they’re in this predicament and their ticket out, but each example is forgotten shortly after. By the end Lena and Daniel prove perfectly placed figures for love conquers all gravitas. It’s too bad Nyqvist’s Schäfer was never allowed to be as insane outside his walls as inside because his exploding into cartoonish theatrics might have saved the day.

Colonia premiered at TIFF and opens on April 15th.