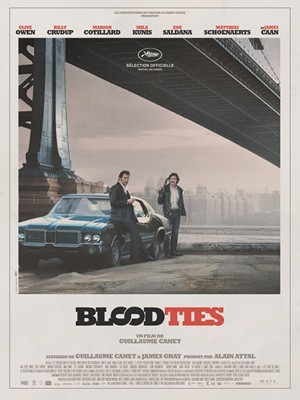 Guillaume Canet’s Blood Ties not only tells a story that’s been wrought so often, but, worse yet, in a manner that lacks the raw, rough, and ready energy of those films which influenced it. Anchored by several strong performances, the film stars Clive Owen as Chris Pierzynski, a criminal whose recently been released from jail while his brother, Frank (Billy Crudup), is, of course, a cop. (Noah Emmerich even plays his boss in a fitting bit of type casting.) The two fight like only brothers can, while the women in their lives — Marion Cotillard as Chris’ baby mama-turned business partner; Mila Kunis as his girlfriend, later wife; and Zoe Saldana as Frank’s wife — sit back and observe as the men’s father (James Caan) attempts to break it up. After working a string of jobs, the straight life proves too difficult when a business he attempts to launch finds itself blocked by political interests, forcing Chris to turn back to a life of crime. The police know as much, and the force tightens the screws on Frank; at one point, he’s told to throw his brother out of the house or they’re taking his shield.

Though set in 1974 Brooklyn, its several international cast members managing surprisingly strong Brooklyn accents, Blood Ties is a remake of a 2008 French thriller by the title of Rivals. Treading on the same ground as co-writer / producer James Gray’s The Yards and We Own The Night, Canet injects some style into this film, but it all plays too safe. If ever there was a work calling out to be shot on gritty 16mm and blown-up, it’s this one — but, as it stands, DCP doesn’t replicate 16mm nearly as well as 35mm. Even with these technical complaints cast aside, the rest is too generic to build and subvert any expectations. It contains many of the same beats we’ve seen time and time again, one problem, perhaps, being that we see so many similar, excellent cop dramas on television nowadays. (There’s a little more complexity and emotional ambiguity at play here, however, including multiple definitions of “family,” as each man makes their own mistakes.) The performances are excellent, with Crudup playing the kind of role normally served for Gray’s twice-used Mark Wahlberg: the straight-shooting cop who will take down his brother if the duty calls.

Emotional and kinetic energy is still missing. The Place Beyond the Pines had a similar angle, but that flawed film lived and breathed — this, on the other hand, is a flawed film constantly constrained by its own sense of importance and scope. I want to smell the garbage and filth of 1970’s New York; instead, Canet delivers a character-centered thriller that doesn’t break so much as an inch of new ground.

Blood Ties is currently screening at TIFF and opens in the U.S. next April. Click below for our complete coverage.