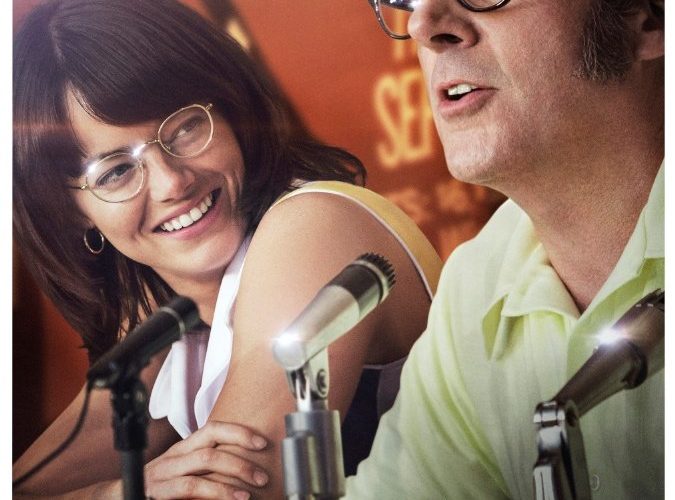 TIFF Review: ‘Battle of the Sexes’ Capably Feeds Off the Current Zeitgeist

The 1973 “Battle of the Sexes” tennis match between Billie Jean King and Bobby Riggs captured the imagination of not only tennis enthusiasts, but of the whole world. There has always been the persistent rumor that Riggs threw the match to settle debts with the mob. Whether or not that is true seems highly irrelevant to directors Valerie Faris and Jonathan Dayton’s depiction of the events.

The latest film from the duo behind Little Miss Sunshine and Ruby Sparks, aptly titled Battle of the Sexes, seems to be the kind of project that was quickly green lit to feed off of the current zeitgeist. It stars Emma Stone and Steve Carell as the competitors and feels as relevant as any movie released this year. The drama recounts the events that led to the historic tennis match between the 29-year-old, number two-ranked tennis sensation Billie Jean King, and the retired, boorish former Open champ Bobby Riggs.

The electrifying 1973 tennis match became the most-watched televised sports event of all time. Not only did it catch the aforementioned zeitgeist, but it also sparked a global conversation on gender equality in not just sports, but the common workplace. It has even been said to be a catalyst for the strong feminist movement that arose during the decade.

King and Riggs were complete opposites. She was a cool, calm, and collected athlete that answered criticisms on the court, while he was nothing more than a has-been showman that wanted to take full advantage of his last gasping breath of fame.

Off-court, King was fighting her own personal demons. Unhappily married, she was struggling to confront her attraction to the same sex and was even in the midst of an affair with a hairdresser, brilliantly played here by Andrea Riseborough. The whole subplot is handled with touching humanity by the directors as Riseborough and Stone trade verbal and physical sparks.

No matter the circumstances, King’s husband urged her to fight gender establishment politics for equal pay, as she went on to create her own female tennis tournaments where pay was much closer to that of the men’s.

There may be some slight deviations from the real events in the film version, but Carell and Stone do a fine job of recreating the circus of 1973, despite the usual tropes that come with such sports films. The immense pressure that was on King at a time is epitomized in Emma Stone’s performance, with the actress doing a powerful job at conveying this struggle simply through her face. King refused to be bullied and intimidated by then tennis head Jack Kramer. For the role, Stone’s dyed black hair and ’70s specs make her fitting for King whereas Carrell’s background in comedy lends great service to his role as Riggs.

While the film does succumb to certain clichés, what’s refreshing is that the main event takes up less than ten minutes of screen time. For Faris and Dayton, it’s the lead-up and political atmosphere that gets more dramatic pull. Stone is the standout, bringing an astounding power and depth to her role as she layers the complexities of King. Carrell is funny and fierce, playing a much-hated real-life figure who was, we learn, not that bad of a guy. It was all show, which can’t be an easy task for any actor, but Carrell proves his worth yet again here.

The film’s tackling of feminist issues is also well-done. Because of today’s revitalized misogyny, the male chauvinism of the 1970s feels pertinently timely, which makes the viewer wonder: Have we really come a long way in our battles for gender equality? Rigg’s supporters are loud, obnoxious, and misogynous, whereas King’s are thoughtful, socially / politically conscious, and progressive. Sound familiar? This could easily be an allegory to last year’s election, to which many have compared the actual “Battle of the Sexes.”

Simon Beaufoy’s screenplay does its best to bypass conventions, yet still neglects to fully draw King. Her affair with Riseborough’s hairdresser, which could have been fascinating, barely scrapes the surface. It doesn’t bring anything new to gay cinema and even feels like familiar territory. At some point, Riseborough completely disappears from the storyline and isn’t seen until the very end.

Tonal inconsistencies also bring problematic issues. Focusing on the two main characters is a smart move by Faris, Dayton and Beaufoy, but in doing so are also hampered by an odd mix of comedy and drama which can sometimes bewilder. Stone’s King is a serious personality whereas, Carrell’s Riggs is a jokester whose every sentence seems to lead to inevitable punchlines.

Coping with all these pressures in the time period only added to the stature of Billie Jean King, and the film does a commendable job of sealing her legend. Although it may be lacking originality, Battle of the Sexes is finely-tuned storytelling that has been consummated by real pros.

Battle of the Sexes screened at the Toronto International Film Festival and opens on September 22.