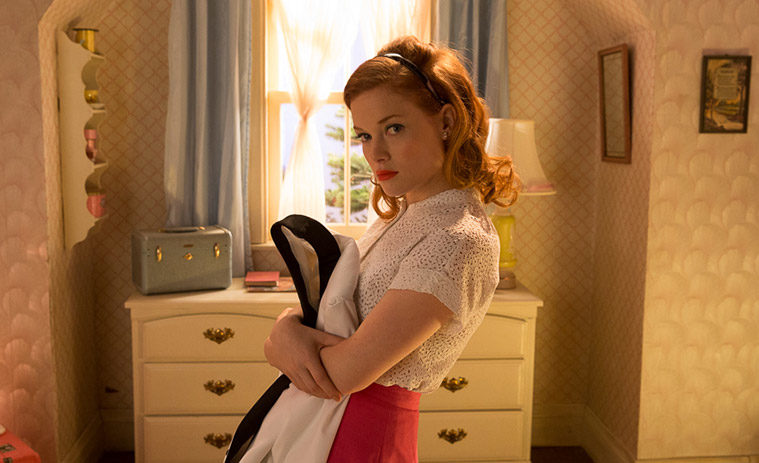 Harkening back to the era of its setting, Bang Bang Baby embraces the over-the-top aesthetic of 1963 entertainment with small town girl Stepphy (Jane Levy) dreaming big for a chance at stardom in New York City. Overproduced, old-timey vocals emanate from her mouth as faux backdrops provide the film with the same type of production value we see in the cheesy TV program starring heartthrob Bobby Shore (Justin Chatwin) that she adores. Unfortunately, even if her song wins her a spot on American Ingénue, her alcoholic father George (Peter Stormare) will never let her leave the fictional town of Lonely Arms. He needs her to care for him like he did her after his wife left. Angry, frustrated, and alone, Stepphy takes a ride from acquaintance and Purple Mist Chemical Company employee Fabian (David Reale) before swiftly drifting into nightmare.

It’s at this point where the chemical plant starts emitting a gaseous poison that starts mutating the entire town just as Bobby Shore and his German friend Helmut (Kristian Bruun) serendipitously arrive. Believing this to be her second chance at stardom, Stepphy invites them both to stay at her house so he’ll hear her voice and take her away with him. Things go swimmingly too—at first. Bobby falls in love with the prospect of marriage in the air and tells George he’s investing in his casino idea. Despite this happiness, though, Stepphy realizes she can no longer hide her mutation and the idyllic fantasy falters. Dad grows a bottle of ‘medicine’ in his chest, Fabian returns with an aggressive posture (and second mouth on his neck), and the weird little details you’ve begun noticing take on deeper meaning. Jeffrey St. Jules‘ debut feature simultaneously serves as homage to 50s and 60s cinematic style while also purposefully utilizing it as a way to create Stepphy’s surrealistic fever dream. The tone provides many of the laughs all on its own, whether it’s the deep croon so obviously overdubbed onto Chatwin, the heightened supporting cast speaking each line of dialogue with a twinge of “aww shucks” flavor, or the low-budget sci-fi convention of adding men in radiation suits to confirm danger and keep everyone contained for the good of the story. Lonely Arms becomes a prison for the young girl, introducing Bobby Shore as a coping mechanism against the tragic reality of which there is no escape flattening her psyche. The mist physically manifests what’s not openly spoken about each character and joy evaporates into a bottle of suicide potion.

Like a TV on the fritz, however, the Ed Wood-era sci-fi/horror is hiding a much darker truth with carefully constructed visual and auditory cues. The film, in effect, becomes a manifestation of humanity’s knee-jerk reaction to laugh when scared. Rather than scream at the abyss we giggle, too uncomfortable to declare to the world we’re either not as brave as we believe or actually braver by pretending our souls aren’t getting crushed. Bang Bang Baby isn’t your run-of-the-mill creature feature living in satire, though. No, its horrors exist in the bleakest shadows of society—in the strong taking advantage of the weak, the tortured guilting the successful into becoming as helpless as them, and the fear of accepting the unacceptable. It’s Mulholland Drive-lite, but St. Jules isn’t quite David Lynch.

The comparison is uncanny once you look past the differing tones. However, this difference is a big reason why St. Jules’ musical fantasy is better on paper than execution. He has us wanting to laugh too much before pulling the rug to reveal what’s actually happening beneath the artificial sheen that I’m not sure I ever felt suspense. The mutations occurring never feel life threatening or as anything we should be concerned about. After all, the most menacing grotesquery is Fabian’s neck mouth and all it does is sing in an angrier voice than his. We invest in the absurdity and covet the jokes too often separated by long gaps of action. Until the wall separating reality and fiction shimmers, we embrace the fun and are therefore unprepared for the blindsiding drama to come. That said, I wonder whether my tune would change upon a second viewing because of the detail St. Jules injects. Whenever Stepphy vacates a room post-misting, you can see how those she was talking to haven’t budged until her return. Initially dismissed as a weird tick, it proves an integral clue to figuring out how much control Stepphy wields once we realize what’s going on. It’s our opening to travel further into the nightmare as she begins to steadily crawl out. The terror of reality has been hastily covered by the appeal her dreams coming true provide and like any good surrealist work, similarities between both halves eventually shatter the ruse. By returning to it with knowledge only someone who’s previously watched has, metaphor and deflection gets exposed to allow the architecture to render the façade subordinate.

Whereas Mulholland Drive‘s mysterious pieces sear into your mind to replay hours later, Bang Bang Baby makes its parts so laugh track-y that they’re rendered disposable. Sitting here now trying to decipher the timeline of Stepphy’s journey, I find it difficult to remember much because I wasn’t thinking there would be more than meets the eye until halfway through. Perhaps this makes St. Jules’ accomplishment more complex since he’s created two films in one to ensure a second viewing is an infinitely different experience than the first. While an inviting idea, this means the surface was only half-baked. And if that initial viewing doesn’t grab us enough to return, we’ll never know its true worth. So while it might one day prove great, at present, it might merely connect with a cult audience.