TIFF Review: ‘Anne at 13,000 ft’ is a Cathartic Sensory Experience Bolstered by an Impressive Deragh Campbell 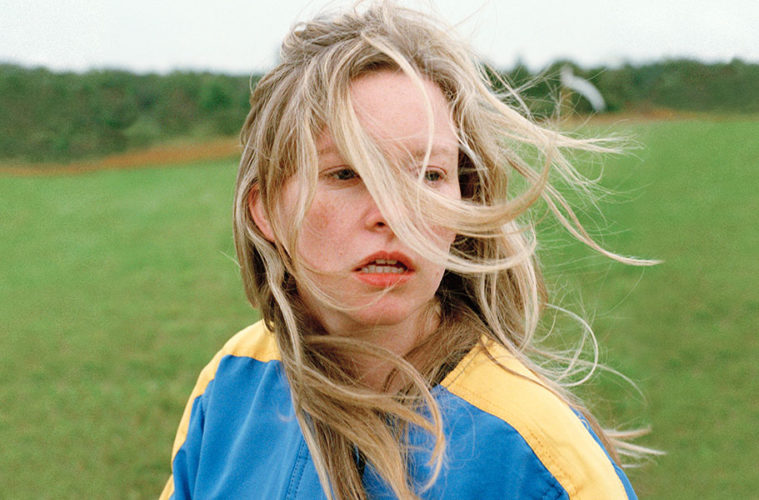 Anne (Deragh Campbell) is in stasis. Doing four shifts a week at a Toronto daycare, she’s repeatedly given a hard time by co-workers (or the managerial state in general) for being “unprofessional,” i.e. daydreaming or playing too much with the kids. Perhaps a reflection of how many of us reach a certain point, say in our late 20s, where we realize that we’re not going to actually be made happy by our career. Beyond struggling at work, Anne’s interactions with friends, family, and Tinder dates alike all take on different plains of awkwardness; she struggles to maintain conversation, a straight face, or even a line of thought.

Things somewhat pick up for her with a meet-cute at the wedding of a friend. The gregarious Matt (Matt Johnson) instantly takes a liking to her after a self-effacing toast, sensing a kind, funny soul. Though a new relationship doesn’t necessarily end up taking things anywhere too much better for her. Anne still faces her social issues at work or when interacting with members of Matt’s family. Is there something truly wrong with her?

Anne at 13,000 ft is bolstered by an impressive performance by Canadian indie cinema stalwart Deragh Campbell; her body language and nervous, disaffected voice seemingly in tune with a jagged edit or the jitter of the camera. One almost can’t imagine the film with anyone else in the lead. In a way she functions as a mediator for a work somewhat mysterious in intention throughout, as one isn’t exactly sure as to what writer-director Kazik Radwanski is trying to specifically articulate as it pertains to Anne’s social or mental condition.

A certain wariness sets in during the film’s early stages. Even beyond Anne’s work there’s a heavy presence of children in the film, pointing to the red flag of this unspoken belief in art cinema that child actors riffing or improvising hold some kind of authenticity, from here a kind of bad faith sneaking in. But what’s maybe most interesting about his work is that each one of Radwanski’s film has a tension about where he’s leading us; as if watching the last fifteen to twenty years of contemporary arthouse cinema has trained us to expect certain results from the “formally rigorous character study.” The film’s cathartic climax may seem like somewhat of a foregone conclusion in retrospect, but it’s so muted that you can’t really accuse it of stringing us along by teasing some kind of nervous breakdown.

Though not to simply praise the director for his modesty again, this film displays more formal ambition; whereas his two past works, Tower and How Heavy This Hammer, locked you in with their similar Toronto misfit protagonists through extended close-ups, this is a far more sensory and jarring experience. For example, the film’s (title-inspiring) motif of Anne skydiving is startling and dreamy. Still maintaining some of his old tricks–like the marriage sequence ending with an empty banquet hall only glimpsed through the periphery of a tight shot of Anne and Matt–there’s still a sense of claustrophobia, if not a more surprising scene-to-scene flow.

What’s most appealing about Anne at 13,000 ft is that it’s going for something unknowable. There’s certainly something to be said for a film dealing with such tricky material that doesn’t try to prescribe, but rather mend. Empathy isn’t always a productive end for cinema, but it can definitely be the right start.

Anne at 13,000 ft premiered at the Toronto International Film Festival.