TIFF Review: All Quiet on the Western Front Sacrifices Brutality for Cliché 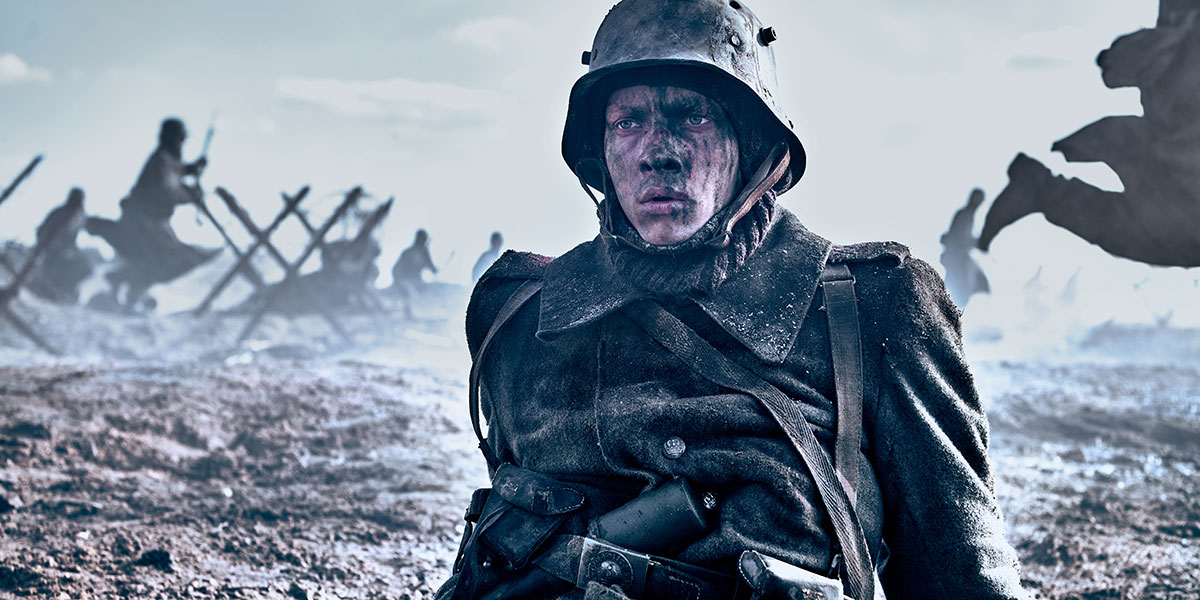 In a year and festival where Steven Spielberg releases a reflective film on his own life and relationship to cinema, it’s understandable that we get a war film indebted to Saving Private Ryan—for better and for worse. A group of four young men slowly lose their innocence via the death and violence they encounter. The faces of these young men (children, really) get caked with soot, blood, mud, and burnt remains of their brethren in the unforgiving battlefield. Their wide-eyed, patriotic valiance at the beginning of their campaign turn into horrors that mirror those of Florya, the immortally sour-faced boy in Come and See, though I’d say Elem Klimov’s film is much bleaker.

Though All Quiet on the Western Front aims to show the brute ugliness of war, it has the DNA of a Hollywood movie, and as such seeks to also valorize death and tragedy as a spiritual sacrifice. Its most morally dubious but cinematically appreciative quality is that it’s entertaining to watch. Battles orchestrate violence in ways very similar to the famous beach-storming sequence of Saving Private Ryan. Sweeping tracking shots of soldiers stampeding across a vast canvass of dirt and hills look stunning on a huge screen; too bad this is going straight to Netflix.

Coupling a minimalist (albeit loud-and-thumping) score by Volker Bertelmann and a cold, unfeeling color scheme by cinematographer James Friend gives a menacing, unwaveringly serious savagery to director Edward Berger’s aesthetic—danger and imminent violence are palpable even when there is hardly any action onscreen. Often the sound catches you off-guard in its unpredictability; it becomes hard to distinguish between what’s part of the score and what’s actually the sounds of a bomb or a missile. These exploding war sequences are jarringly juxtaposed with the deafening silence of the meeting rooms and halls of German and French officials.

To know the outcome beforehand doesn’t hamper All Quiet‘s nervous edge. Subtle hints of the oncoming economic strife and restlessness of the German people through French military’s crippling demands give events a weightage that extends beyond any one narrative arc. Death in Berger’s film is intrinsically tied to the timing of these closed-door discussions. When characters die is always contextualized temporally with where the war is at a certain point and the impact of each death is reliant on that. This works in some respects, but as events grind down to their last half-hour these also become predictable.

The seats of power and the frivolity of human life in the eyes of those in luxurious halls of the capitols are aptly rendered in a sequence where the German officials sign the cease-fire treaty. With the supple strokes of a pen and the soft shuffle of a few prices of paper, the French general declares “okay, the war is over.” It’s a moment so quick and simple as to be terrifying.

All Quiet on the Western Front screened at the 2022 Toronto International Film Festival and comes to Netflix on October 28.