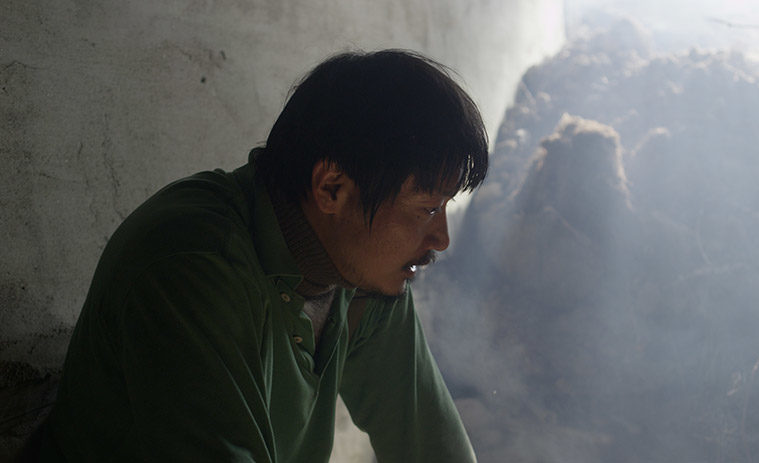 The trend towards the narrative of the victim in cinema has hit critical mass lately, with all manner of films delving into stories of people who are abused and subjugated by life, astonished and blameless victims of a world wrought from chance and cruelty. In most cases the plots of these films form a kind of endurance test, taking a character and ladling on the weight until they either bend, break, or are given a reprieve. Given the state of the world today, it is not hard to see why these narratives strike a chord with us, but it is disheartening to realize that in a bulk of these films the protagonist is does not so much act as they are acted upon.

Alive, the newest film from writer/director and star Park Jung-bum, stands in stark contrast to the majority of these films in that it’s protagonist, Jeong-cheol (Park), is the primary acting force in his own life. A laborer living in the coldest, poorest province of South Korean, Jeong-cheol is attempting to find the money and energy to rebuild his home and his family following a rockslide that has left both in tatters. He has a crew on a construction site that has not been paid, a foreman who has disappeared, a friend who is mentally disabled, and a sister who suffers from what is probably bipolar disorder and has a twelve-year-old daughter from an unknown father. This is a laundry list of problems, and in the wrong hands that rundown could serve as a bog of unhappiness in which the narrative and the character could founder and drown. Park, in his capacity as writer, is able to execute the almost impossible task of making these plot points into organic situations over which the protagonist can exert a force of will. As a director, he shoots and edits the story in a way that draws the broadest possible social context from the narrative while keeping the emotional connections confined to his compassionately drawn characters. As an actor, he projects the kind of wounded strength and determination that comes from a life of having to be the strongest person in the room, making Jeong-cheol stolid without being stoic, driven without being robotic.

It is a balancing act that is at first perilous to watch, then marvelous to behold. It is a further testament to the near effortlessness of the craft on display in this film that soon enough the marvel of the accomplishment fades into the background and the story and acting alone draws the viewer along. Through use of long takes and wholly naturalistic performance, Park creates a world that feels lived-in and organic. Rather than the movie feeling constructed by scenes, single moments wrought from imagination to suit a narrative construct, Alive feels as though it were the chronicle of a life edited for time. The trajectory of the narrative is impossible to predict, as it is in life, and yet the course of the story is not impossible to foresee, as it is in life. Yet aside from creating a compelling film which looks at an oft-overlooked aspect of life in a foreign country, Alive serves another purpose. It shines a light not just on the cyclical nature of poverty, but on the stigma of mental health disorders in both a specific national or societal sense, as well as among humanity at large. Jeong-cheol is struggling to hold his family together and rebuild what they lost, but his knowledge of his own strength makes him see its absence in others as a character flaw. This is especially true of his sister (Lee Seung-yeon), a woman clearly suffering from emotional and psychological problems. Having lived the same experiences as her, and having overcome the emotional trauma inflicted, he believes that his sister should be able to do the same.

This is his greatest flaw, and it comes not because of an inherent weakness in him but because of his inability to empathize with the weakness in others. The strong become that way through struggle, and through their struggle and their success they believe that weakness is the lack of the will to struggle. It is impossible for Jeong-cheol to understand the inherent flaw in his sister’s brain chemistry that drives her to self-destruction. Refusing the address a problem that he cannot control through will or physical force, Jeong-cheol creates more problems than he may be able to handle, and the parallel between his obstinacy and its fallout and the way a society might tread the same path is not hard to see.

Powerful art can act on a variety of levels – as a deeply affecting personal story; as a social commentary for a specific place; as a microcosm of the whole of humanity. Alive, through the incredible work of Park Jung-bum, hits each of these marks with the utmost precision.

Alive is screening at TIFF. See our complete coverage below.