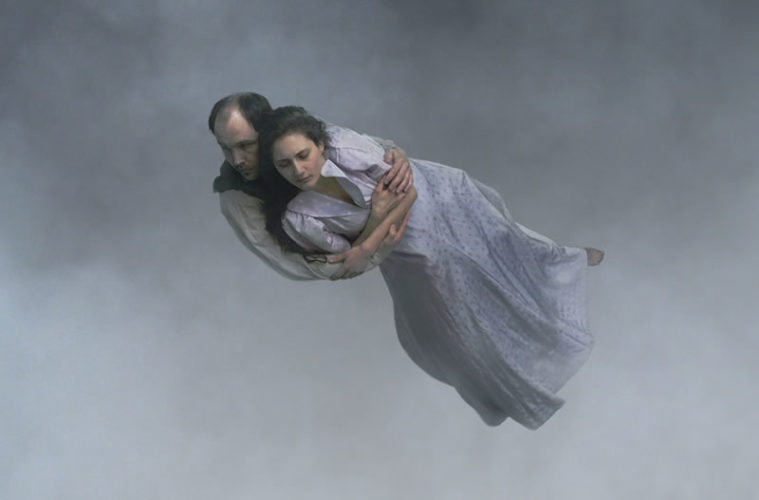 “What should I do now that I have lost my faith?” is the question that animates About Endlessness; this being the new film by Roy Andersson, it is delivered in a doctor’s waiting room, over and over again, in a creaky voice, by a dumpy man in late middle age who continues his plaint even after the doctor and his receptionist gruntingly force him outside into the hallway, from whence they can hear him scratching at the door like a zombie.

About Endlessness is Roy Andersson’s fourth film of this century; it looks much like the previous three, and nothing like anything else ever made. Mostly unrelated blackout scenes are shot on forced-perspective studio sets stripped bare of the real world; minor-key moments of human angst, like a waiter ineffectually mopping up a red wine spill with an absolutely sodden towel, or a housewife’s half-consoling, half-embittered impatience with her husband’s wistful reflections on a wasted life, are juxtaposed with more dire vignettes, like the recurring drama of the priest who’s lost his faith. “It’s my job to preach about god,” he wails in despair. (Everybody’s got to make a living.)

Small scenes continue to accumulate, until every one feels monumental, like a potential culmination. Andersson’s mastery—his refinement of a style that was sui generis and fully formed when the already middle-aged director emerged in 2000 with Songs from the Second Floor—comes through as well in the exquisitely beautiful, manicured production design. His sets evoke a flexible 20th century, all in a unified yellow-brown-gray color palette, with warrenlike streets of neoclassical Stockholm architecture stripped of all but the most basic signage and public-space clutter; cafes have 20s Deco mirrors or dingy postwar linoleum, and kitchens are stuck in the 60s microwave years. The actors are familiar Andersson types, with their brittle hair and droopy skin covered in pasty white makeup, further accentuated by the slowness of their movements, the quaver of their hands—perhaps only Twin Peaks: The Return in recent memory has been so attuned to the wavelength of old age.

Though in fact, compared to earlier Andersson films, About Endlessness’s cast skews younger and healthier (and is reasonably ethnically diverse, and not just in the honor-killing vignette that represents the film’s one misstep, thank god). There are even honest-to-god pretty girls—no 40-year-old middle-management garb, cadaverous facepaint or anything!—who dance happily to the radio in a scene that’s even crueler for directly following a scarring, shoddy moment of violence than it would be if it had preceded it.

Andersson’s sketches feel sketchier—sparser and more suggestive—with every film; About Endlessness hits perhaps a handful of blackly humorous punchlines, and the only irony is cosmic. The mood is free-floating pathos; scenes of incredible tenderness are juxtaposed with flashes of WWII, and man’s capacity for cruelty and hubris. An uncomplaining father ties his daughter’s shoes in pouring rain on muddy soccer field between tower blocks, getting soaked while she stands under her own umbrella, then takes her hand and leads her on; a dentist throws up his hands at a whiny patient, then retreats to a bar, lost in his own troubles as the other patrons marvel at the falling snow. The title of About Endlessness refers to the First Law of Thermodynamics, the idea that all energy in the world continues to exist in one form or another—embodied in the two angels that float above a bombed-out city in one interlude, and who may be the reincarnation of any number of the film’s silent, more or less contented couples.

What is distinct about Andersson’s films is that they require no preamble, no backstory or dramatic crisis, to motivate their concern with existential despair at its most maximalist and general. It is the default setting of his human terrarium. The final shot of About Endlessness hits a concluding note familiar from his previous films—drolly Sisyphean human labor juxtaposed with a callback to an earlier scene, a meticulous and phlegmatically wise shrug at time’s passage—but as always, the pleasure, if that’s the right word, is in the journey.

About Endlessness screened at the Toronto International Film Festival  and opens on June 12.