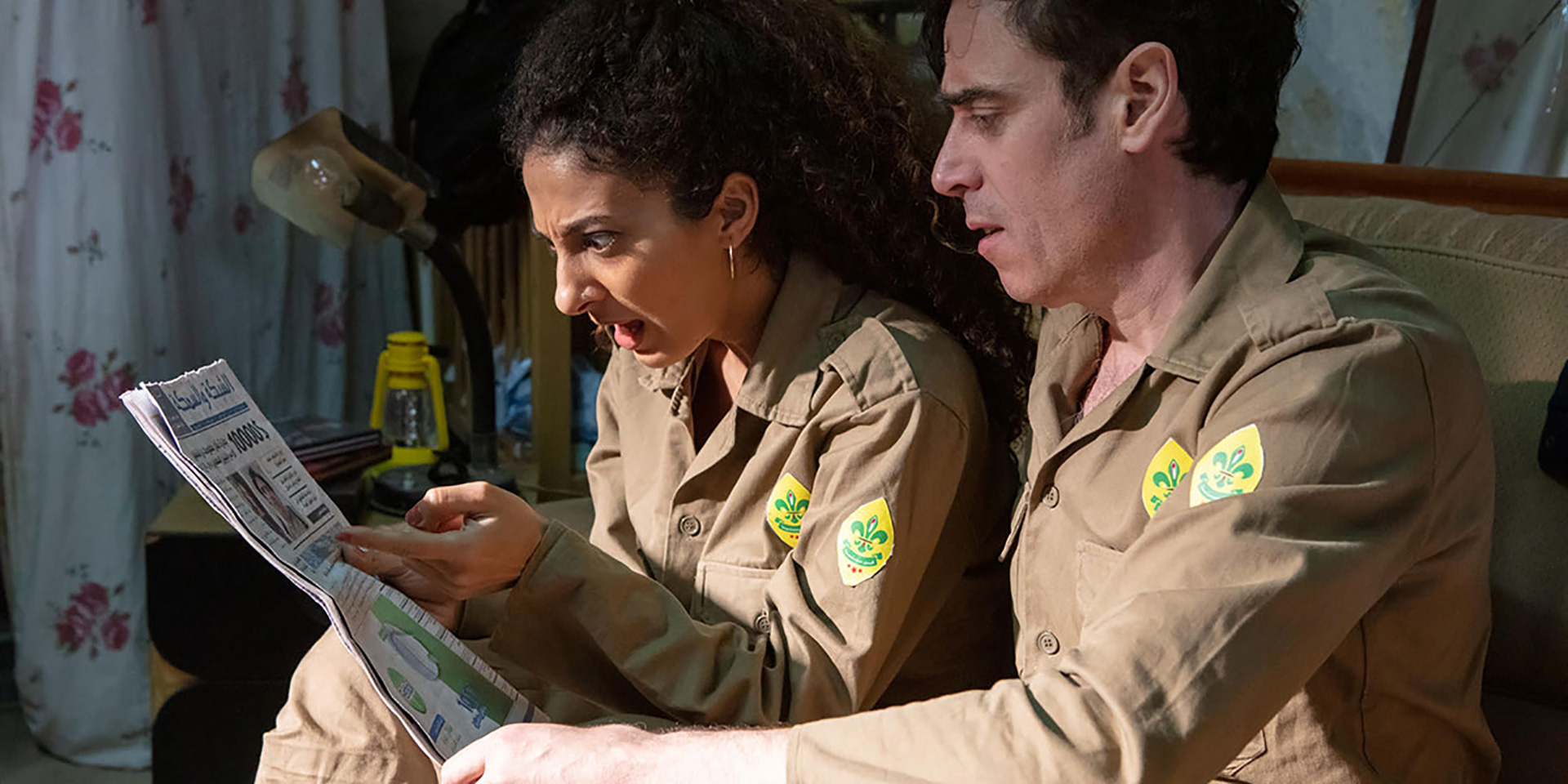 Director Basil Khalil and co-writer Daniel Ka-Chun Chan waste no time setting the tone for their Middle Eastern comedy A Gaza Weekend. Conceived over a decade ago (and thus not a COVID film, despite adding a couple COVID “jokes” into the script), its purpose is to satirize the very real conflict between Palestinians and Israelis to its most absurd extremes while also finding the common ground of humanity hiding beneath—much like Khalil’s enjoyable, Oscar-nominated short Ave Maria. As such, watching a scientist carelessly mill about an Israeli infectious disease center is less about her obvious lack of protocol and more about the color of her skin. Why? Because it means the country, despite being ground zero for a deadly disease, can absolve itself by blaming an Arab.

And what’s the point of making Israel the epicenter for a cataclysmic pandemic if you don’t also render Gaza the safest place on Earth? The reason: Israel has blocked the area off with walls and checkpoints to turn it into the largest “open-air prison” in the world. Thus you can’t blame them for not wanting to help their neighbors by opening the doors that they closed on them. So the only way out is by boat, but those have effectively disappeared beyond the rich and their yachts. Which means, despite his desperation, a British journalist (Stephen Mangan’s Michael) and his Israeli girlfriend (Mouna Hawa’s Keren) are stranded and fated to contract the virus. They must either stay and wait for the end or think outside the box.

Enter Emad (Loai Nofi) and Waleed (Adam Bakri), two Palestinians who’ve never shied from crossing lines of legality. Already owing money to everyone in Gaza when their get-rich-quick schemes never pan out (the latest is selling bra cups as medical masks), they’re heading towards a beating from their benefactors, since Waleed’s neighbor Saleh (Adeeb Safadi) has graciously used his position as a policeman to keep them out of jail. They of course can’t say no when an opportunity for thousands of dollars crosses their path. They’ve never smuggled people across borders before, but their counterfeiting buddy is friendly with Hamas and perhaps positioned to do most of the work for them. What nobody counted on, however, is that the Englishman’s partner wasn’t English herself.

This isn’t the weekend anyone wanted. Keren has let herself enter the “cesspool” that is Gaza and thus transforms herself into a traitor to Israel. She knows zero Arabic and her paranoia gets her screaming whenever Hamas is brought up because she believes she’s going to be murdered (something she’s willing to endure to uphold her “honor”). Waleed has unwillingly facilitated the transfer of a de facto terrorist into his country, rendering himself a traitor too. He can’t turn them over to the police and implicate himself. He can’t kill them, either, being that he isn’t a violent man. So they’re stuck without a plan beneath the home of a police officer and his gossiping wife (Shaden Kanboura’s Amira). It’s only a matter of time before they’re caught.

The scenario is ripe for humor, whether culturally or situationally specific. This is Gaza, after all. As Waleed yells in a fit of frustration when Michael dares to insinuate he wouldn’t love to escape too considering the life the Israelis have forced upon him and his family through bombings, poverty, imprisonments, and ill-fit and corruptible leaders in positions of power making pride impossible, it’s not like he has any control. He and Emad are harassed by their own people and at-risk of arrest for driving down the street. His wife (Maria Zreik’s Nuhad) is sick of being left in the dark as to all his schemes, threatening to leave him and give Amira more reason to snoop. At a certain point, Waleed is simply trying to stay alive.

Khalil and Chan toss the kitchen sink with faulty electricity, irate mothers, wanted posters, and the fear of something as tiny as a sneeze, considering the world is on lockdown. And there’s no better distillation of the strife in this region than seeing a Palestinian couple jump through hoops to save an Israeli’s life while she refuses to even shut off her phone; their worry about Israel tracking it pales in comparison to her worry that her body will never be found. We also get a good look at the informality of nepotism (“Emad is in jail? I’ll have the police chief’s mother get him out”) and the dearth of sanitation—stopped-up sewers and an undrinkable, bacteria-laced water supply both proving key plot points.

The cast sells it all with an ability to remain endearing even as egos and hubris threaten to turn them sour. Saleh is the closest character we have to a villain, but that’s more about duty (and comic relief) than malice. The true antagonist force is the reality that both sides of this conflict are too indoctrinated to see the other as anything but monsters. That’s what Waleed, Nuhad, Emad, Michael, and Keren are up against: an abstract, yet immovable belief that humanity comes second. Being thrust into a mutually assured destruction-like circumstance, their lives become dependent on fostering trust and teamwork. Michael tries his best to be the UN’s building bridges, but an early TV segment proves neither side has love for that organization.

Hawa and Mangan are great as strangers in a strange land trying to maintain superiority despite being at their smugglers’ mercy the moment they ran into that Hamas-controlled tunnel. Nofi and Safadi are a lot of fun for different reasons—the former being an opportunistic coward, the latter a pariah whose overzealous hero complex has everyone else in the police force done with his shenanigans (leading him to spiral out of control when everyone thinks he’s crying wolf). And Bakri and Zreik prove the film’s heart and soul—a husband-and-wife duo who learns that they’re unstoppable if they allow themselves to be transparent with the other. Waleed might have the gumption, but Nuhad has the brains. Together they might even be able to save the world.

A Gaza Weekend had its world premiere at the Toronto International Film Festival.