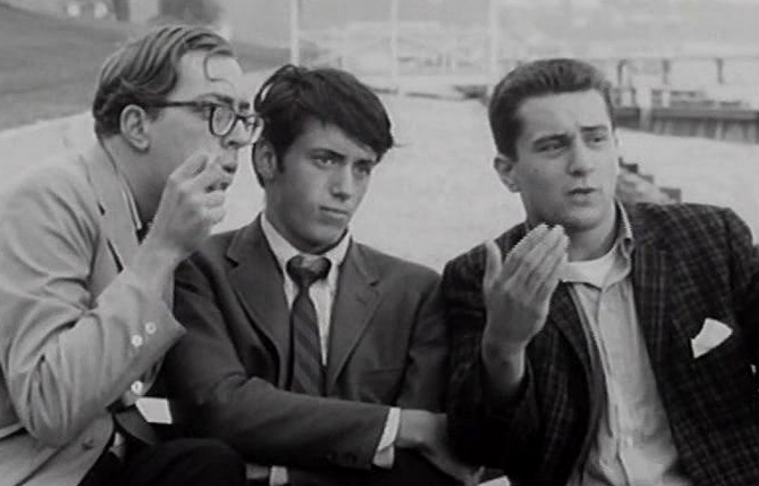 Manic, messy, and experimental, The Wedding Party serves as a 90-minute preamble, both technically and thematically, to the next decade of Brian De Palma’s young career. Co-directed with two others (Wilford Leach and Cynthia Munroe), the film was shot in 1963, only to be released in 1969, after both De Palma and Robert De Niro’s stars were on the rise. Leach was a theater professor at Sarah Lawrence, De Palma and Munroe two of his students. Fellow student Jill Clayburgh stars as Josephine, the bride-to-be, while Charles Pfluger plays Charlie, the impending groom. Jennifer Salt — who would go on to star in Murder à la Mod, Hi, Mom! and Sisters — also appears as Phoebe, friend of the bride.

Not too long after Charlie docks on the upscale island where the wedding is to take place and meets Josephine’s whole, judgmental family, his two groomsmen, Cecil (De Niro) and Alistair (William Finley, another De Palma regular), do their damnedest to convince the young man to run. Shot in black-and-white, many of the stylistic choices are cut from the cloth of the French New Wave, a crucial source of inspiration for De Palma. Plenty of ADR scenes of dialogue over sped-up frames and jump-cutting serve to springboard the sparse narrative, which takes place over this wedding weekend. Title cards consisting of quotations from “The Compleat Bridegroom” serve as winking bookmarks. This gag is most successful before an inspired sequence in which the decidedly anti-marriage Cecil and Alistair leave for “The Stag Party” while Charlie remains trapped at the family house. By the time the groomsmen return to the house, they are convinced that marriage is the right move. It’s a lovely set-up that allows for some genuine laughs later on, when Charlie is the one trying to run and the guys are trying to get him to stay. “Every great man knows how to suffer,” Alistair says, arguing that in order for Charlie to become a great artist he needs to get married and suffer a little bit. “Bergman knows how to suffer. Fellini knows how to suffer. Even Hitchcock knows how to suffer.” Little successes like this are peppered throughout The Wedding Party without ever congealing into anything very memorable.

Both Finley and De Niro stand out from the troupe (Clayburgh’s barely in the thing), while De Palma himself, in the documentary De Palma, quite plainly states that it was on this set that he realized he knew more about making movies than Leach, his mentor. And for as amateurish as The Wedding Party plays in general, the auteur’s early touch cannot be denied. These characters are less like living, breathing humans and more like personified, thinly veiled ideas about social expectation and obligation — religious, political, and otherwise. Too much of the running time is spent discussing what the movie’s about rather than simply being what it’s about. There’s an obvious and liberally minded interest in the class system here and the absurdities and stereotypes inherent, but it doesn’t amount to much. Smarter and more radical takes on these topics would come from De Palma in the form of Greetings, Hi, Mom!, Get To Know Your Rabbit, and even Home Movies. In these later films, De Palma excels in the role of provocateur, something he was either unable (given the co-directors) or unwilling to fully explore in The Wedding Party.

Extended comedy sequences — this film features one in which a drunk and doubtful Charlie attempts to seduce Celeste (Judy Thomas) at his own wedding reception — tightened up (and got funnier) in later works as the director grew more comfortable with his vision. Still, other choices here prove to be benchmarks for repetition, especially De Palma’s early penchant for supporting characters that are both racially charged (a not-too-funny Indian ex-boyfriend) and viciously on-the-nose (the preachy, concerned celebrant). There’s also the stylistic flourishes, mentioned earlier, that populate the frame, foreshadowing more interesting, daring visuals to come.

As a piece of entertainment, The Wedding Party does not offer much on its own. As a piece of cinephilia, especially for those deep into this very De Palma summer, it is the sometimes-fascinating origin story of a great artist.