The Way Back Review: Ben Affleck Finds Catharsis on the Court 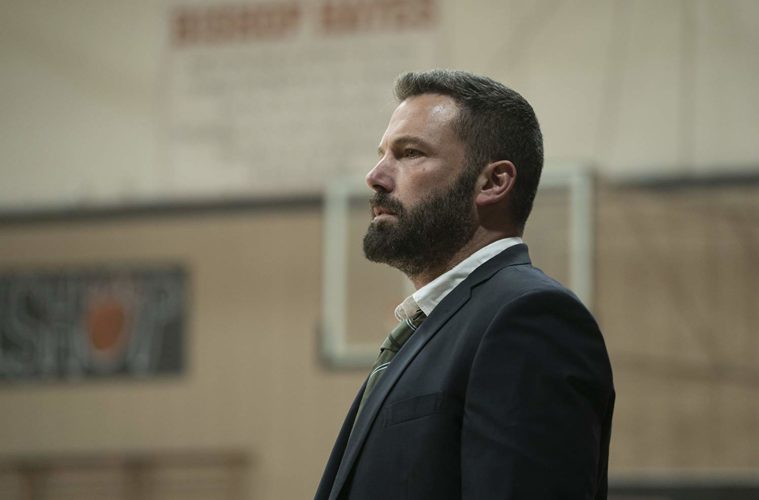 It’s a small detail, the way Ben Affleck opens a can of beer, but it’s impossible to ignore. Before he sets one down on a table, he pops the top using just his right thumb and index finger, then abruptly slugs it back. He does it so fluidly, so casually, as if he’s been doing this forever. Maybe at one point in his life, it was a party trick, a muted expression of masculinity. Now it’s just the most efficient way to get alcohol to his throat.

This drunken dexterity takes place early in The Way Back, director Gavin O’Connor’s throwback sports drama that never forgets that it’s really an intimate character study of a man in crisis. It’s just one of many unique ways that Jack Cunningham (Affleck) keeps a drink close to him. The movie’s opening montage, which functions as a solemn overture, follows him from his construction job (sipping vodka inside a thermos) to his local dive bar (sharing daily beers with the regulars) to his shower (perching his can onto the soap caddy). Sometimes, his intoxication causes aggressive outbursts, like when he bats a drink off the table in front of his sister (Michaela Watkins). His recent marital separation and tragic loss hide behind his stupor.

What he needs is redemption, and the movie supplies it when the principal of Bishop Hayes High School, his alma mater, asks him to coach the basketball squad and turn it back into a winner. A former star player with Division-I scholarship opportunities, Jack recognizes the chance to challenge his dual persona as local legend and cautionary tale. He begrudgingly takes over the team, comprised of hard edges and untapped potential, and like the best and worst iterations of the genre, The Way Back leans onto its trusty guard rails—the coach deconstructs the culture, the players gain his trust, they start winning in the process.

Movies like this tend to get sidetracked. One temptation for filmmakers is to follow the action and go down the momentous rabbit hole—to invest in the kinetic energy of high school kids, hormones and final scores and forget about its story. The more conventional detour might build Jack into a white savior (the Bishop Hayes team is primarily black), pivoting to highlight a privileged didact and his conquest to help players escape their economic uncertainties, much like Sunset Park, Fast Break, or Coach Carter. In The Way Back, there are glimpses of these conventions; Jack mentors his point guard (Brandon Wilson) and gives tough love to his tardy center (Melvin Gregg). But O’Connor, who co-wrote the superb script with Brad Inglesby, remains focused on his glazed and weary subject.

It’s a wise choice. For the last couple of weeks, Affleck has been using the movie’s press tour as his own therapy session, opening up about his divorce, his father’s alcoholism, and struggles with his own sobriety. It’s risky to invite any comparison between an actor’s personal life and his creative decisions, but Affleck has practically encouraged the connections. It was apparent in a movie like last year’s Triple Frontier, which features a strained relationship between father and daughter, but it’s blinding in The Way Back. In multiple scenes with his wife (Janina Gavankar), Jack breaks down—into tears and faraway stares. On the court, cursing beside the chaplain, his voice cracks from exasperation, flaring his drunken temper. Affleck is going for it in a way that suggests he already has before, just never on the screen.

These moments blanket the movie in muscled melancholy but cast the movie’s highs into further relief. During a crucial game late in the season, O’Connor flexes his skills as a conductor of sports adrenaline, cutting between the scoreboard, the bench and the opposing coach, swelling his music in anxious alignment with the clock. His cinematographer, Eduard Grau, captures everything from the baselines and sidelines, enough to make the team’s climactic moments feel at once euphoric, devastating and slightly unattached—a good reminder of how tightly this script is tethered to Jack’s own perspective and individual rehabilitation.

In The Accountant, the jumbled first collaboration between O’Connor and Affleck, you could feel a similar ambition, building a sports-like sequence to highlight the intensified nature of rote mathematics. It worked in one brief scene, but the movie is too scattered, too busy for an emotional payoff. O’Connor’s strongest movies, Miracle and Warrior, portray athletics as portraits of masculinity on the brink, affecting as focused journeys of personal growth and meditations on communal success.

The Way Back shares those convictions and themes, but its greatest asset is its honesty. At multiple junctures, O’Connor keeps the camera locked onto Affleck’s face, which gets lost into contemplative voids. These are windows into what feels like real pain—quiet, textured moments that require patience. They layer and build towards something riveting: the realization that strong directing, writing, and performing can turn an improbable half-court shot into an easy, fulfilling layup.

The Way Back opens on Friday, March 6.