The Wave Review: Justin Long Has a Hallucinogenic Nightmare of an Adventure 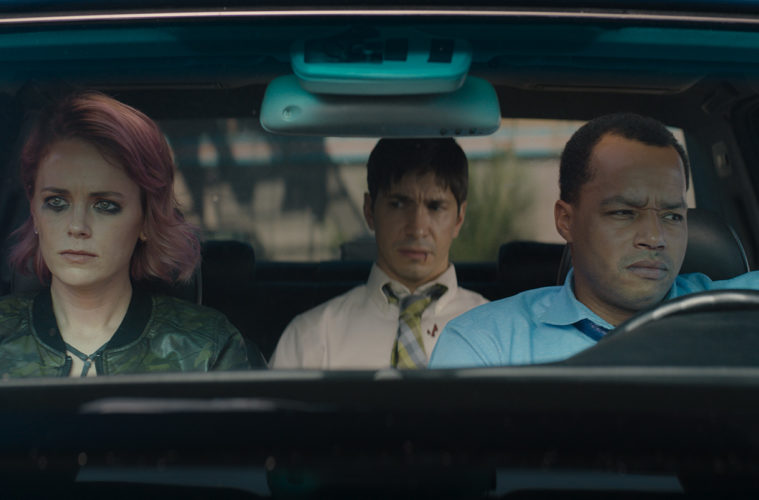 The first thing you need to know when entering director Gille Klabin and writer Carl W. Lucas’ The Wave is that it takes a lot of liberties. The second thing is that doing so doesn’t have to be a problem. So much of what happens on-screen is born from convenience and ultimately has no explanation (if it even needs one) before playing its long-term role within Frank’s (Justin Long) hallucinogenic nightmare of an adventure. Just because he might get a handle on what’s happening to manipulate the experience to his benefit (or at least his will) doesn’t mean he (or we) understand how beyond the notion that the implausible isn’t necessarily impossible when a creative strain of karmic retribution proves to be the goal. The sky’s the limit.

You wouldn’t think as much from the start considering Frank is nothing if not a wet blanket of a protagonist blindly trapped by a meaningless existence causing unspeakable pain in the name of “duty.” He hates his wife, their paycheck-to-paycheck existence (if a huge house, 4K television, and new dresses can be defined as paycheck-to-paycheck rather than simply “living beyond your means”), and a job as a corporate attorney scouring contracts for loopholes that destroy the lower class to bolster the upper. So his discovering a mistake that will save his client from paying out four million dollars to a widow and her three children comes with excitement. This could mean a promotion. Increased salary. Happiness. He can become a successfully opportunistic monster by stepping on children too.

Yet Frank rejects coworker/friend Jeff’s (Donald Faison) invitation to celebrate. So defeated by life, he knows that anything but a good night’s sleep to present his findings to the board tomorrow morning would be a mistake. But he gets greedy. This not-yet-guaranteed fantasy of more forced him to look at what he possessed now. Because he didn’t like what he saw, Frank dials Jeff and the two hit a seedy bar to hang with strangers Natalie (Katia Winter) and Theresa (Sheila Vand) before accompanying them to a chaotic house party. That’s where he meets Aeolus (Tommy Flanagan) and imbibes a drug of unknown origins that sends his bodying ripping through time and his mind descending through fear. The Greek winds of change and destruction are unleashed.

Why does he take it? Because Frank wants to be cool and cool guys do what he doesn’t. Where does it leave him? Only disoriented, sans wallet, and ninety-minutes from the start of his meeting. With violent aggression on behalf of his wife (Sarah Minnich’s Cheryl), the uncertainty of Theresa’s whereabouts, and the sickening twisting of everything he’s deluded himself into believing for years with the bald-faced and horrific reality of what he’s pretended wasn’t true, Frank becomes a frayed nerve transporting between locations, days, and dimensions. Nothing turns out like he hopes and tragedies begin compounding until he literally has a gun pointed at his head. Aeolus said to pay attention, but we rarely know what to pay attention to until it’s explained the second time around.

This can be frustrating because we feel duped into believing we can figure things out if we are smart enough. That’s not true, though. The Wave is constructed in a way that makes it impossible to know what’s happening or where it’s leading (besides an obvious set-up to make good on an error of self-motivated judgment) until the moment arrives to take the next step forward. This is intentional as Klabin says his desire was to place us in Frank’s scared and confused shoes. Knowing early would ruin the reveal and make us resent the character for not keeping up. Not knowing risks us resenting the film itself, but at least it allows the ride to unfold at its own pace and to its own whims.

In the end Klabin and Lucas lead us towards a conclusion that satisfies desires we didn’t even really know we had since we never get to know anyone but Frank on a level above the superficial. We realize too that maybe the only drug Frank’s on is the one everyone falls victim to eventually: depression. Because where did his hallucination actually begin? Was it the moment he kissed Theresa with whatever Aeolus dropped on her tongue or the moment he met her at the bar? Was the unadulterated violence on his TV real? How about the couple making out in a car parked across the street from his house? Maybe he’s been sleepwalking through a warped manifestation of reality since he took his soulless job six years ago.

Is this revelation as deep as the filmmakers might hope? No. But I’m not completely sure they hoped for “deepness” anyway. This is a comedy of the stoner variety despite its philosophical quandaries and science-fiction underpinnings. They have an erratic dealer named Ritchie (Ronnie Gene Blevins steals the show) and low-budget (albeit well-executed) special effects that run the screen through Photoshop filters whenever something wild is happening for a knowingly tongue-in-cheek weirdness that lets us laugh while also ensuring we’re cognizant of no longer being in Kansas. Klabin and Lucas are using the framework of a crazy mind-trip to follow characters as they succumb to the fact they’re nowhere near as hip or ready for what’s coming. They’re turning Frank’s “big day” into a living Hell.

And Long is up for the challenge. He excels at comedy—especially roles where he’s the butt of the joke and/or whipping boy. Faison is the consummate wingman (see Scrubs and his Turk’s ability to both be silly and deliver maturity relative to J.D.’s lack thereof as opposed to an actual mature person like Carla) and Vand provides a calmly provocative presence to push Frank out of his comfort zone. They’re by his side in spirit if not physically for the whole journey, but it’s his own need for self-awareness that proves his chance at salvation. Does Frank earn his fate? Definitely. Does he earn its potential for redemption? Perhaps not. The Wave is more interested in supplying a good time and that should be enough for some.

The Wave hits limited theaters and VOD on January 17.