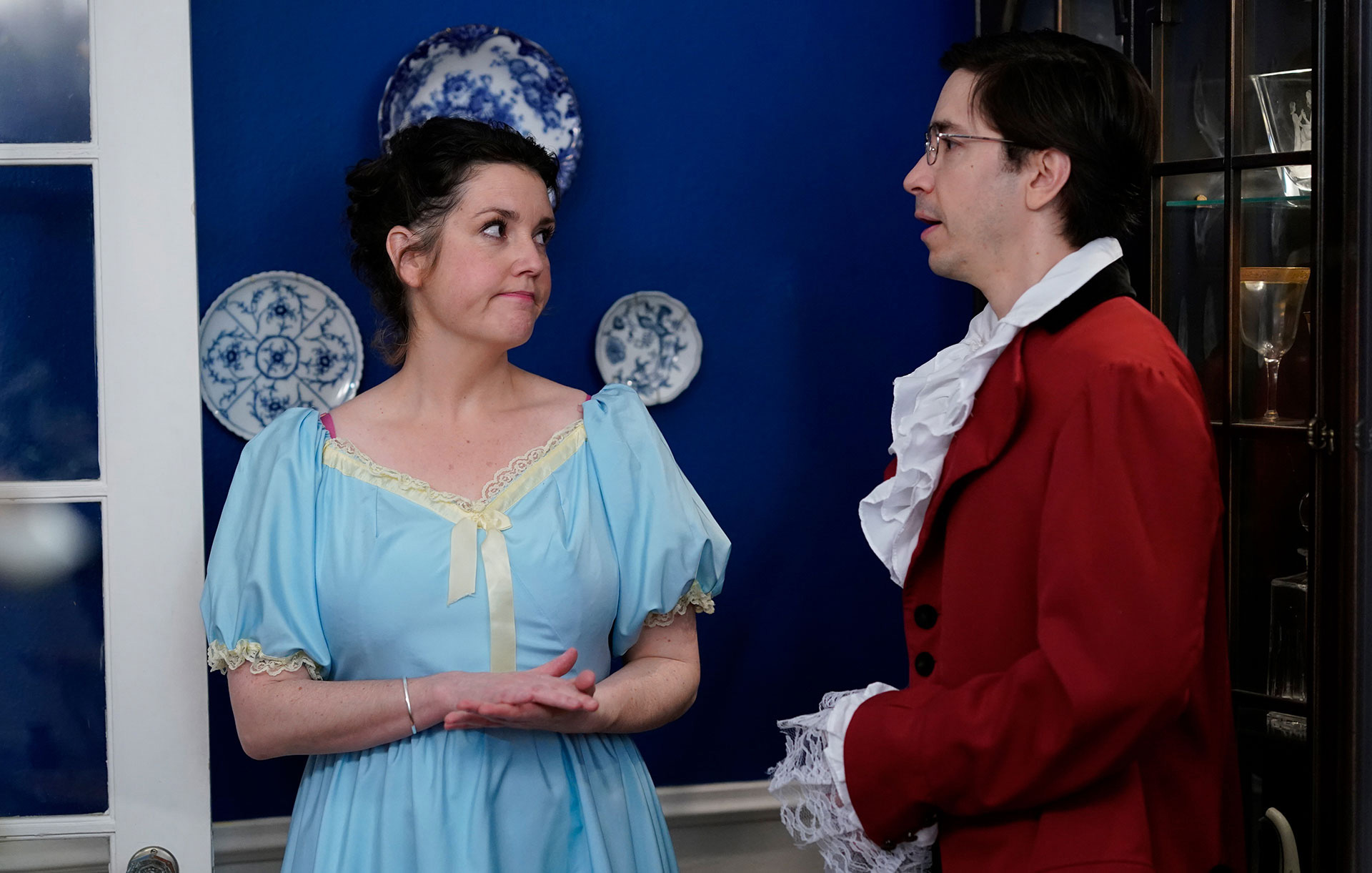 The directorial debut of brothers Justin and Christian Long (who also co-write) hinges on a pedophilia joke. Let’s get that out in the open because you’re either the type of person who can chalk it up to “good humor” and carry on or the type who checks the calendar, realizes it is indeed 2021, and decides to spend their time on anything else. It’s not like Lady of the Manor consciously deals with the gag beyond an ill-advised decision to make a callback like it’s no big deal either. The Longs put their plot in motion on its back, push it aside to make room for a 1990s-era douchebag and multiple fart jokes (the latter do deliver some legitimately good laughs), and ultimately revive it as a parting gift.

If we’re being honest, though, what did you expect? I like Justin Long, but you can’t be familiar with his career and not assume his comedic sensibilities might skew towards the crassly, un-PC tone of his own early-00s box office heyday (if not earlier). They’ve written stereotypes, placed them in proximity, and let them run wherever their uncouth and archaic sensibilities took them. Throwing in an eleventh-hour mystery with some actual substance to reinvest in characters we’ve all but given up on is probably too little too late, but it does lend some purpose to the journey. Enough for a genuine recommendation? No. The script is way too juvenile and repetitious for that. Maybe enough for a smile, though, if only because everyone is having so much fun.

That transparent energy is infectious whether you approve of the subject matter or care about the motivations. It’s needed, too, since the protagonist (Melanie Lynskey’s Hannah) is hardly a role model worthy of sympathy. She’s a deadbeat who loses everything because she was too stoned to get the address right while performing a job delivering weed that only asks her to do one thing: get the address right. Fired, dumped, and unwittingly forced to register as a sex offender, Hannah finds herself at her local bar (tended by a woefully under-utilized Luis Guzmán) where the rich, walking-talking specimen of gonorrhea known as Tanner Wadsworth (Ryan Phillippe) happens to be spending his evening. Seeing her as an easy mark for workplace sex, he offers a job.

She takes it because he’s hot and she needs a place to stay—in that order. And since he’s as ill-qualified to be her boss as she is to fulfill the position—play-acting his great-great-grandmother Elizabeth while giving paid tours of the family’s estate-turned-museum—who’s going to stop them? The building’s custodian (Tamara Austin’s Nia Pipkin, a distant relative of that same ancestor’s original servants) has too much on her plate to care how Tanner ruins his reputation (and that of his soon-to-be congressional candidate father, played by Patrick Duffy). Hannah therefore proceeds to talk nonsense to a class of students because she was literally handed the job hours earlier while drunk. It’s so bad that the visiting professor (Justin Long’s Dr. Plum) incredulously asks what’s going on.

It’s light, absurd, and very low-stakes. Hannah obviously looks past Tanner’s wealth of red flags to sleep with him and Tanner simply pouts and preens like you’d expect from a prima donna who’s never worked a day in his life. Considering there does need to be some sort of conflict to throw a wrench in what is otherwise a cushy existence chock full of zero responsibilities for the dimwit twins, however, in comes the real Elizabeth Wadsworth in ghost form (Judy Greer). Hannah is the only person who can see her because she’s the one disgracing her good name and defiling her pristine home. Elizabeth calls her imposter a slut (but with more lady-like vocabulary) before ruining the night’s mood and subsequently derailing the next morning’s tour.

That’s the long and short of it for a good portion of the runtime besides, the added “nice guy” point to the inevitable lust triangle courtesy Plum’s crush on Hannah (even if it’s difficult to know whether he’s attracted to her because she’s unpretentious or dumber than him). He serves a role, though, so it doesn’t really matter why he likes her if he fulfills his duty to the plot—when the time comes, of course, since Hannah needs to become friends with Elizabeth first. It’s that unsurprising evolution (they initially hate each other) that ultimately leads to the aforementioned mystery that just might kick Hannah into putting her meandering life on-track. It’s all very one-note, multiple montages carried solely by the cast’s over-the-top performances.

They’re each doing caricatures from nerd (Long) to STD (Phillippe) and train wreck (Lynskey) to haughty (Greer). The former pair walks a completely straight line as whipping boys to the script; the latter duo earn space to grow by striking a deal where Hannah agrees to let Elizabeth teach her etiquette if she can smoke a bowl and finally remove Tanner’s pants. One learns to slow down and apply herself while the other experiences the joy of frivolity (because the last 150 years were apparently spent with her eyes closed). Attempts at stranger-in-a-strange-land jokes arise to varying effect as our interest in things wrapping up quickly outshines our caring about how the filmmakers choose to do it.

To everyone’s credit, however, they know what this is. A mid-credit outtake with Lynskey joking that her current scene will “be her Oscar reel” proves these are like-minded individuals enjoying themselves. That should be enough for some: seeing how their hearts are in the right place with enthusiasm making up for any flaws in the craft itself. Lynskey and Greer are both fantastically funny and irreverent, with Long and Phillippe leaning into their supporting roles to help augment that main odd-couple pairing. While I did laugh more than a few times, most of it unfortunately came with a head-shake and an eye-roll. That the second half does find direction almost makes up for the first’s complete lack thereof, but it just wasn’t for me in the end.

Lady of the Manor hits limited release and Digital HD/VOD on September 17.